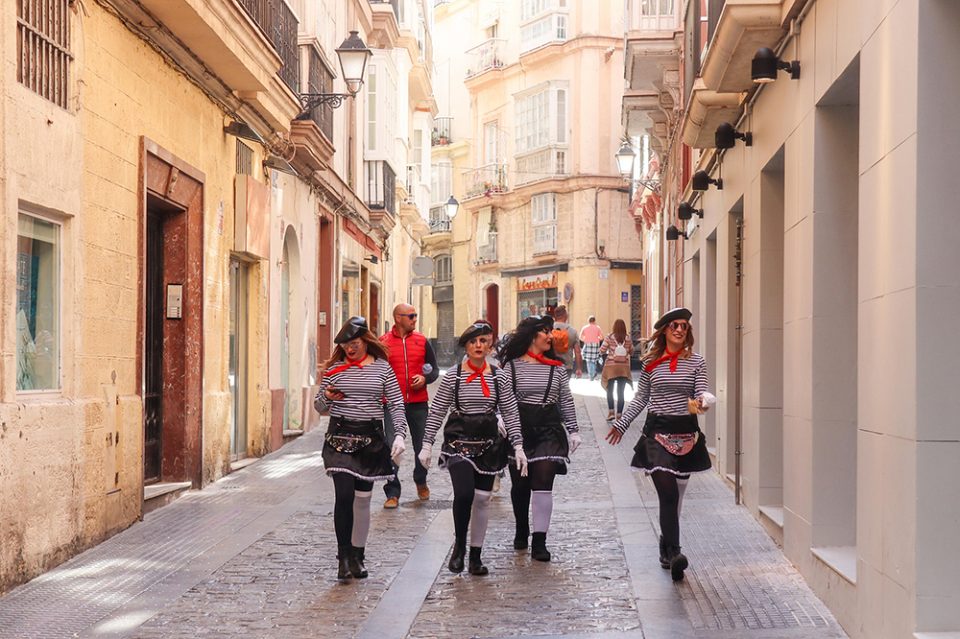 Eleni Philippou returns to her old hometown to discover one of Spain’s most famed fiestas.

Winding cobbled streets, fishing boats and intimate tapas bars decorate the small Spanish town of Cádiz and although a popular local tourism spot, it still somehow remains off the international radar. If there is one time of the year, however, when this Andalusian town is a hit with visitors, it’s during its renowned carnival; two weeks of singing, drinking, eating and making random, wonderful connections in the streets.

I arrived in Cádiz on a Friday a day after the carnival started, six years since I called this small town home.

Gatidanos – as Cádiz locals are called – spend all year long preparing for the carnival, a tradition said to date back to the 15th or 16th century. Now, it’s become a highlight for aficionados from around the world. 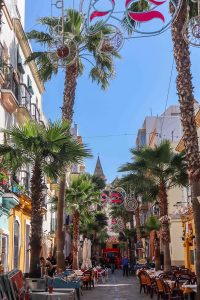 The old town of Cádiz hosts the carnival and it’s where the town’s beauty lies, not just in monuments but in experiencing the buzzing street life, quaint tavernas and talkative locals. One stroll around town and I’m instantly reminded why I love this place. Grandmothers sit outside to people-watch, kids play in squares, people greet each other by name. It’s charming.

Gatidanos know how to celebrate life, even a mundane Tuesday night is exciting but their biggest example of passion for life is during the carnival.

Come evening, the first batch of carnival-goers began to take over the jamon-ceiling tapas bars as the final competition of the carnival choir groups took place at the Falla Theatre. Singing is a key component to the Cádiz carnival – chirigotas, comparsas and choirs take over the streets for two weeks. Before they do, there’s a big 20-day competition with almost 300 groups participating. More impressive than their singing are their costumes and make-up.

On Saturday, uncertain about what to expect, we went for a casual morning stroll, hoping to visit some of the tourist sites we never got around to while living here. It quickly became apparent that the carnival weekend was the wrong time for any sightseeing. 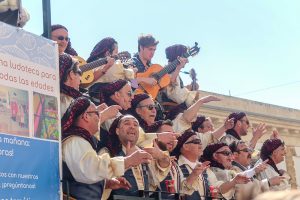 Singing groups began to take over the squares and people were already drinking and chatting, dressed up in humorous costumes. Dozens of places sold props and outfits, even the most disorganised carnival-goers would have plenty to choose from. A street seller had brightly coloured wigs, a quick-fix costume for the unprepared. I opted for electric blue.

When a singing group popped up people gathered quickly round and we were drawn in. It’s an entertaining sight as performances are extremely theatrical. The juice lays in the lyrics, understanding them however can be a challenge. Even confident Spanish-speakers might struggle because Gatidanos are known for their particular accent that is difficult for an untrained ear to understand and the content is often a parody on politics, society and current events so you’d need to know the context to fully appreciate the art.

Spending the day ambling around town we came upon the festivities, official or unofficial, as the crowds led us there.

By Sunday noon, the town was packed. And ready for the famed carnival choirs that travel the streets in open floats singing comical and serious songs. The market, from where they start, was brimming with people and the floats overflowed with singers, facial expressions, hand movements, rhythm and synchronicity oozing out of each choir member.

With no time to waste sitting in a bar or café, most block their doors with a makeshift bar from where beer, wine, tinto de verano (a local popular drink similar to sangria) and typical Gatidano treats of fried squid, dried ham and shrimp tortillas mostly served in paper cones are served. Or food carts sell various types of seafood, it’s the town’s speciality. Sea urchins, crabs legs, the tiniest shrimps you’ll ever come across and oysters but there’s no place to sit and enjoy it – most meals are eaten on the go.

El Andaluz bar is renowned for its fried fish and during the carnival the staff runs around dishing out its small plates. I ordered crispy smelt, squid and rice and sat in between older two men and women.

Next on the programme was Sunday’s Big Parade. Spaniards started taking up front-row seats as early as 5pm though the parade wouldn’t pass our spot for another two hours. Experienced carnival-goers came prepared with foldable plastic chairs and bags filled with water and snacks.

Eventually, the first group marched along followed by an orchestra and dancers. Tiger-dressed girls danced, Aladdin’s Jasmine stood proudly on a podium, futuristic robotics partied through but the flamenco dancers stole the show. It’s the dance of Andalusia in all of its heartfelt glory. They say that the first flamenco schools were opened here in Cádiz, Jerez de la Frontera (a neighbouring town) and Seville. Seeing young girls in their polka dot dresses and clacking shoes going for their flamenco classes was an ordinary weekly occurrence when I lived there.

Even after the parade finished and the floats were parked for the day, street musicians and amateur chirigotas entertained the flâneurs still out and about. When the organised activities conclude, the carnival continues, day and night. Squares are filled, tapas bars are bursting to serve those with hungry stomachs and the eternal search for a bathroom with toilet paper goes on.

Six-year-olds, eighty-year olds, Erasmus students and visitors like us, roamed the packed streets. Your feet take you everywhere and even if they’re not too sure where to, the sound of music and distant chatter will lead you to the next adventure. Even after two experiences of this renowned Carnival so much more remains to be seen, explored and understood.

It’s a trademark of Cádiz‘s history and traditions born out of social life and Gatidano humour. As one of Spain’s most famed holidays, the Cádiz Carnival converts this typical family town into a colourful fiesta turning even first-timers into avid admirers.