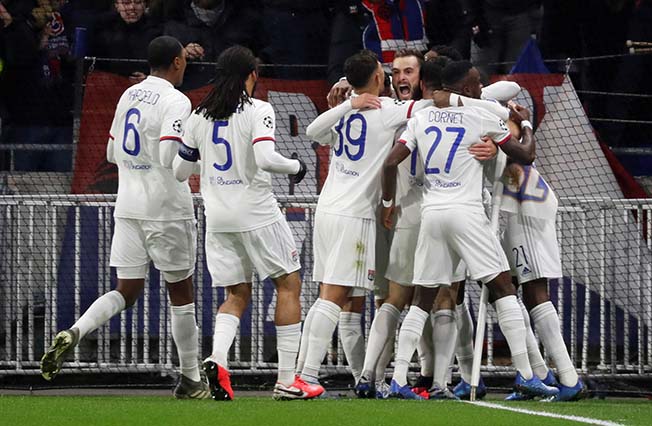 Lucas Tousart celebrates his goal against Juventus with his teammates

Olympique Lyonnais will seek millions of euros in damages as they face being deprived of European competition for the first time in a quarter of a century following the decision to end the Ligue 1 season, club president Jean-Michel Aulas said.

The French League (LFP) said on Thursday it was ending the 2019-20 campaign amid the COVID-19 crisis, resulting in Lyon finishing seventh, outside of the positions that would offer a place in European competition for next season.

With some teams having played 27 matches and others 28, the LFP drew up the final standings according to a performance index – number of points per game weighed by head-to-head record.

“It’s a big loss of opportunity that has a financial value that amounts to dozens of million euros, which will be claimed in damages,” Aulas, whose club won the Ligue 1 title from 2002-08 and reached the Champions League’s last four in 2010, told local newspaper Le Progres.

Aulas argued the season could have been finished in the form of playoffs behind closed doors in August and that the ranking method was disputable.

“We see that these standings are illogical. I don’t want to single out a club more than another but Nice played at home more than us and faced Paris St Germain (PSG) only once while we played them twice,” he explained.

Lyon were seventh after 28 games on 40 points, 10 behind third-placed Stade Rennais, who occupy the last European Champions League qualifying spot.

“Over the last 10 years, OL (Olympique Lyonnais) caught up at least three times with the second-placed team while lagging more than 10 points behind,” said Aulas.

Lyon, who have featured in a European competition every season since 1995-96, are still in this year’s Champions League.

They beat Juventus 1-0 in the first leg of their last-16 tie and could still play in the competition next season if they win it this year, should it be completed.

They could qualify for the Europa League though if they win the League Cup. They are set to face PSG in the final but it has yet to be rescheduled, with the LFP on Thursday saying it could be staged behind closed doors in early August.

UEFA, however, is asking that countries submit their participants for next season’s European competitions by May 25.

Amiens, who were relegated along with Toulouse, said they would study the reasons behind the decision before planning any legal challenge.

“It is an injustice,” Amiens president Bernard Joannin said in a Facebook live broadcast.

“I’ll fight with all the teams to assert our right, because I think this decision isn’t right. We will wait for the minutes of the LFP board of directors.”

“If they want to go to court, let them go,” Maracineanu told RMC Sport.

“I appeal to everyone’s solidarity and responsibility. I appeal to the wealthy and better off that they don’t split hairs … We must also think of others and society. The world must know how to take its losses.”

The new season will start on Aug. 22-23 at the latest and is likely to be held without fans as mass gatherings are banned in France until September.

Coronavirus: Sunday shop opening back on May 10

Coronavirus: guidelines for return to work and school – reminder