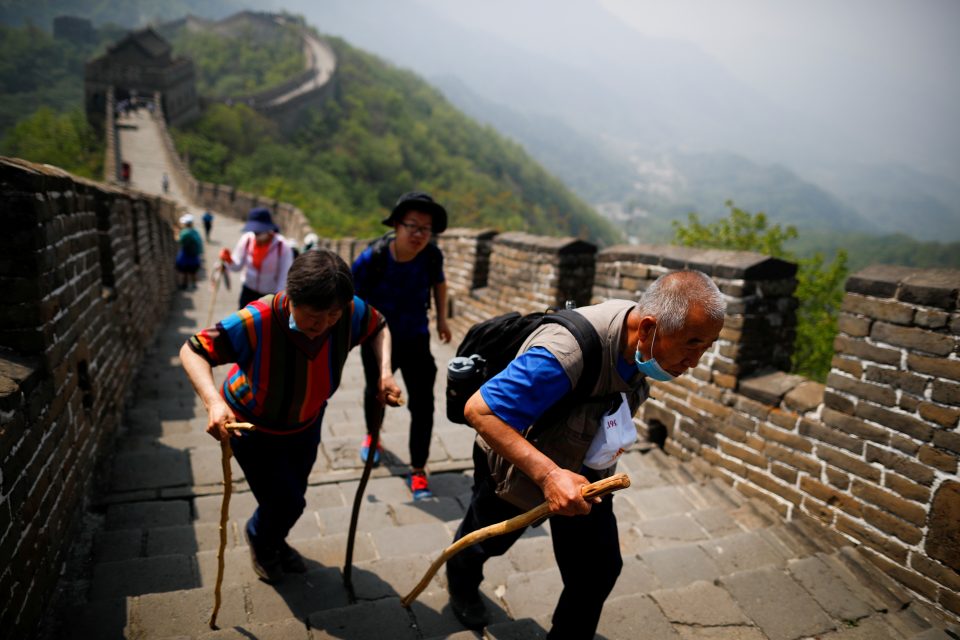 Tourists visit the Mutianyu section of the Great Wall of China

China’s most populous cities saw a spike in outbound travellers, tourists and day-trippers on May 1, first day of a long holiday weekend, led by Wuhan, epicentre of the coronavirus epidemic that first struck the country late last year.

The number of people travelling outside their home cities jumped 40% at the start of the Labour Day weekend, compared with the first day of the Tomb Sweeping holiday on April 4, according to Reuters calculations on data from China’s internet giant Baidu Inc.

The increase in outbound travel during the five-day holiday, one of China’s peak tourism periods each year, would help lift the travel and hospitality sectors that have been hit hard by disruption from the coronavirus pandemic.

The spike in tourism was led by increases in travellers from Wuhan, Beijing, Dalian, Tianjin and Jinan, with China having eased curbs on travel and relaxed rules on quarantine amid dwindling cases of the coronavirus.

Hundreds of sightseeing spots have also been reopened, including the Forbidden City in Beijing, as authorities sought to revive and repair local economies.

The country recorded more than 23 million domestic tourists on May 1, according to China’s culture and tourism ministry.

The Ministry of Transportation expects 23.36 million travellers a day during the period, up from 19.9 million per day during the April 4-6 Tomb Sweeping holiday.

But that estimation would still be far below the 67.13 million travellers per day during the 2019 Labour Day holiday.

The expected drop is partly because China has capped visitors to tourist spots at 30% of capacity to adhere to social distancing rules.

At the West Lake in the eastern city of Hangzhou, the most popular sightseeing spot during the holiday according to Baidu, 183,700 visitors were recorded on May 1, less than a third of the numbers last year.

Some tourists also stayed closer to home, and others avoided areas such as Heilongjiang province that are still battling local virus clusters.

Hubei province, where the epidemic first emerged, was also not a favourite.

China reported one new coronavirus case for May 1, down from 12 a day earlier, and no new deaths, data from the country’s health authority showed on Saturday.

Coronavirus: guidelines for return to work and school – reminder