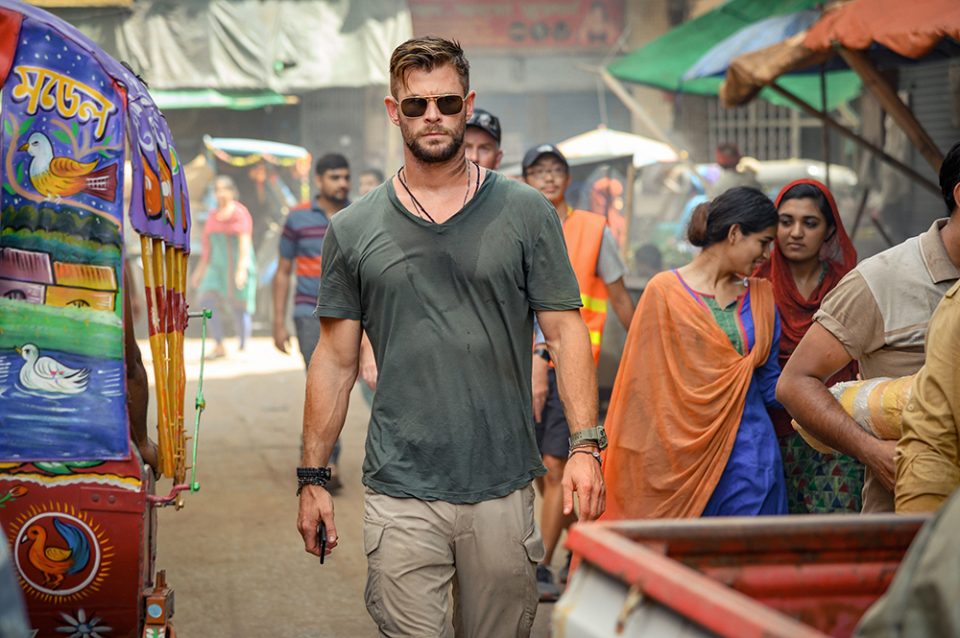 Chris Hemsworth takes on the role of a mercenary recruited to rescue the kidnapped child of a crime lord in new Netflix film Extraction.

Avengers star Chris Hemsworth takes on the role of a mercenary recruited to rescue the kidnapped child of a crime lord in new Netflix film Extraction. He explains how he embraced the movie’s high octane stunts and how he tapped into the emotional heart of the story.

Chris Hemsworth is used to hard work. He’s used to tricky stunts and he’s used to a lot of action.

But his latest project pushed his action man credentials to the very limit.

The Avengers star, best known as hammer-wielding Thor, plays a fearless black market mercenary, Tyler Rake, with nothing left to lose in the new film Extraction.

When he is recruited to rescue the kidnapped son of an imprisoned international crime lord, he is drawn into the murky underworld of weapons dealers and drug traffickers.

The film is penned by Joe Russo, one of the directors of Avengers films Infinity War and Endgame, and is the directorial debut of stunt co-ordinator Sam Hargrave, who has previously served as a stunt double for Chris Evans’ Captain America.

“Joe sent me the script when we were shooting the last Avengers and I loved it,” Hemsworth recalls.

“His pitch was that it was a throwback to a Steve McQueen action film – gritty but with some real heart and memorable characters. Then he told me that Sam Hargrave would direct. I was pretty quickly on board.”

Russo adapted the script from a graphic novel entitled Ciudad that he had written with Ande Parks about a decade ago and gave him the chance to return to his childhood love of the action-thriller genre when translating it for the big screen.

“We’d stay up late with my father on weekends and watch all those quintessential 70s action thrillers,” Russo says.

“So I have a strong emotional connection to the genre, but with this film, I wanted to deconstruct it: deconstruct the notions of what it means to be a hero and ask hard questions about the traditional stereotypes that play out in action movies.

“So by the end of the film you’re left with a lot of ideas that have been turned on their heads.

“Rake is a difficult character and any other actor might have become lost in his self-hating misery, but Chris is able to elevate him with a sense of wit and irony.

“Rake distances himself from other people, but thanks to this young boy – we start to see the cracks, the vulnerability and that’s what makes it so interesting.

“It’s a brave performance by Chris. I don’t think we’ve seen this kind of performance from him before.”

At the heart of that emotion is Tyler’s relationship with Ovi, the young boy he must rescue, played by 14-year-old newcomer Rudhraksh Jaiswal

“From the first day we worked with him, there was this vulnerability and wide-eyed enthusiasm and excitement,” says 36-year-old Hemsworth, who is father to three young children with wife Elsa Pataky, “which is infectious but also suited the character.”

“He also took direction really well. He was able to move with direction which was essential as we wanted to allow the story to grow organically. He was absolutely along for the ride.”

And it was a good thing too, because the film was going to be incredibly demanding for everyone involved.

An 11-minute-long sequence designed to look like one seamless shot, including several car chases, pile ups, hand-to-hand combat, running through tenements, and leaping and falling off roofs, was a particular challenge.

It even required Hemsworth to pack six to eight weeks of training into less than three intense weeks,

“We really hit the ground running. It was a shock to the system for all of us, but it set the pace for the rest of the movie and it didn’t stop,” he remembers.

“This is the most intense film – physically and emotionally – that I’ve ever done but it is also the most rewarding because it felt like we were achieving something special.

“Even though I was exhausted at the end of every day, there was a real sense of accomplishment.”

Luckily their director was a highly skilled stunt co-ordinator.

“Sam was not only demonstrating stunts for us, writing the sequences, and directing them, but there he is strapped in front of a bonnet as close to the action as you could possibly get.

“At one point, his car crashed straight into the side of my car.

“We called cut and looked down and his leg was jammed down in between the two cars, but in some miraculous way, his foot was in that little gap between the wheel and the chassis.

“A couple of inches to the left or right, and it could have been pretty gnarly.”

But nothing compared to the film’s climactic sequence, culminating in a gun battle over a bridge in Thailand.

The scene saw 132 vehicles piled up on the bridge to create a blockade, as well as 52 stuntmen and hundreds of extras.

“The action was non-stop but I like it that way,” Hemsworth says.

“Sometimes on a film when you have long waiting times, you lose momentum, especially with something so physical. But using an actual bridge meant we could immerse ourselves in the action and the emotion.

“I’ve worked a lot with blue and green screen and your imagination has to do a lot of work to create the world. The bridge did a lot of that work for us.

“We never lost sight of the story beneath the action,” he continues.

“At its heart, this film is about these two characters – this hardened mercenary and an innocent kid. Both of them have this sense of loneliness: Ovi is searching for the love of a parent, a mentor or guide, and Rake has intentionally isolated himself because of the guilt he is carrying.

“They meet each other in the strangest of circumstances and they begin to heal one another. Rake goes into the mission for money but actually buried under that he is looking for forgiveness. For me, this is a redemption story – and the third act on the bridge brings all of this to fruition.”

Extraction is streaming on Netflix now.

Temperature “seen” through a pair of glasses