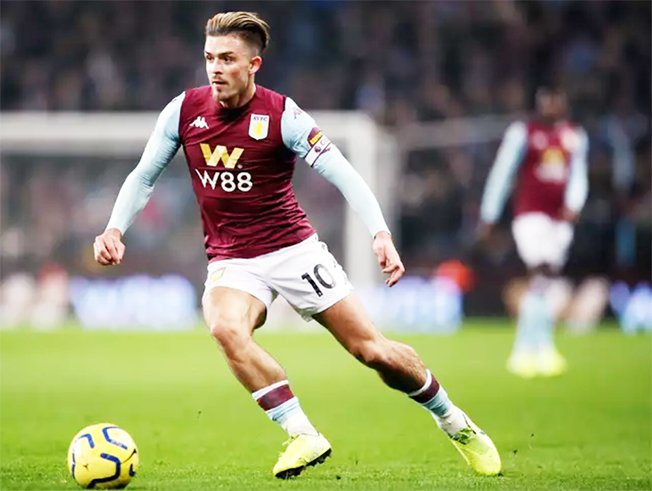 Jack Grealish, Aston Villa’s attacking midfielder and winger, has long been linked with moves away from the club following a string of impressive performances over the past few years. The 24-year-old has been identified as a player that Manchester United, in particular, have a keen interest in.

Question marks over his professionalism have been flagged up after the recent fiasco in which Grealish crashed his Range Rover after attending a friend’s party and driving back at four in the morning. Despite this, stories about the player being courted by the country’s biggest clubs persist.

Ole Gunnar Solskjaer has often said that Manchester United are in need of a cultural change. Although this involves a variety of behind-the-scenes changes, the main driver of this desired adjustment is the first-team squad itself.

In terms of incoming players, the club have brought in Harry Maguire, Aaron Wan-Bissaka, Daniel James and Bruno Fernandes. The players had an average age of 23.2 at the time of signing.

Further, with the exception of Bruno Fernandes, all signings joined from other British clubs (Leicester, Crystal Palace, Swansea).

In a January press conference, Solskjaer said: “That’s the task we’ve started and you can see we are still a way off but we’ve started something that needed doing.”

Solskjaer has also hinted at both the squad makeup as well as the desired style of play. It is clear that United are now favouring young players with a more pronounced upside. Moreover, quicker, more mobile players are being prioritised where possible (James, Fernandes), with some exceptions being made for defensive positions (Harry Maguire).

In December of 2019, the Norwegian said: “I see this attack as being quite similar to the one we had with Ronaldo, Wayne Rooney and Carlos Tevez, with the interchanging of positions and the fast, flowing football.”

While this statement is wishful at best, it is an indication of the desired style of play. You can see this reflected in the moves that have been made.

Grealish ticks two boxes right off the bat. He’s young and he’s British. While the latter is no indicator of player value or talent, it removes the immediate stumbling block of acclimating to the league, country, and overall approach to football. Nothing more, nothing less.

In terms of his age, at 24 years old it’s reasonable to assume that Grealish’s best years are ahead of him and that he can further improve his game at Old Trafford. Both on account of the improved facilities and coaching staff, but also from being able to play with higher-quality team-mates.

Furthermore, unlike many of United’s signings since Sir Alex Ferguson’s retirement, Grealish would not be guaranteed a starting position regardless of the transfer fee. This is a chance for the player to step up and become part of a young collective looking to elevate their game. Being able to rotate a player without significant fear of disgruntlement is a bonus for any manager.

Also, we can’t ignore the fact that Grealish impressed against Manchester United at Old Trafford, where the attacking midfielder scored a peach of a goal to put Aston Villa ahead in the first half.

Finally, Grealish would cost less than James Maddison, who was linked with United in December and January before the arrival of Fernandes. Villa have been rumoured to have placed an £80 million price tag on Grealish, although their dire financial situation, a possible relegation and the effects of the coronavirus may lower that amount. 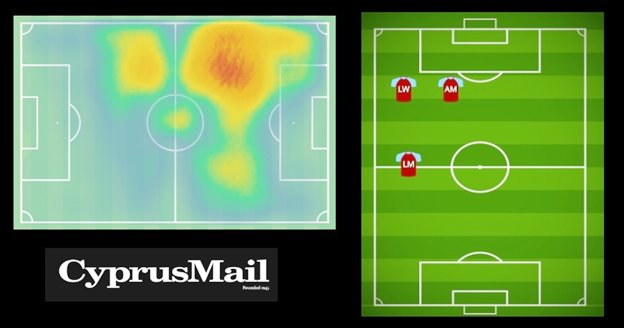 Grealish came up being perceived as a traditional number ten, though he has grown to be as equally adept when playing on the left as well.

His heat map paints the picture of a player spending most of his time on the inside left area of the attacking third, while finding joy both down the line as well as when cutting in towards the middle.

Grealish is an accomplished dribbler, able to control the ball with either foot and is happy to carry it up the pitch during a transition.

Meanwhile, his dribbling success percentage of 57.07% is higher than that of James Maddison, Wilf Zaha, Sadio Mane, Kevin de Bruyne, Heung-Min Son, Bernardo Silva, Mohamed Salah and Raheem Sterling. It does trail behind the figures of Roberto Firmino (57.58%), Aubameyang (61.54%) and Pulišić (58.16%). 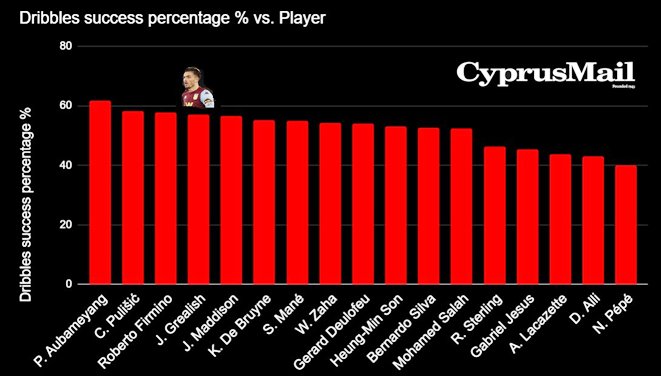 Overall, the combination of a high dribbling attempt rate and his dribbling success percentage make him one of the league’s most effective dribblers. It is a tremendously useful skill to have in your toolbox, especially with the low-block defensive setups United regularly have to face.

Moreover, it helps against high pressing teams like Liverpool and Manchester City, where the ability to manoeuvre out of congested spaces on the pitch can prove pivotal during a counter-attack.

Finally, the Aston Villa player has also aided his side’s cause this season with 7 league goals.

That’s as many as Sebastien Haller and Alexandre Lacazette, both of them strikers, as many as Man City’s Riyad Mahrez, who plays for a vastly superior side, one more than James Maddison, and one fewer than Kevin de Bruyne.

He has also outscored Nicolas Pepe, who Arsenal paid a whopping £72 million to acquire from Lille last summer.

The important piece of information the data discloses here is that Grealish has outperformed both his total xG (expected goals) figure, as well as his xG p90 (expected goals per 90 minutes) figure. He has scored 7 league goals against a total xG of 5.37, while his 0.25 goals per game is higher than his 0.19 xG per 90 minutes number.

There are some limitations as to what can be deduced here, but it would stand to reason that should Grealish be presented with an increased volume of shooting opportunities in high-quality situations he would more than likely achieve a proportional rise in scored goals.

However, Grealish is not all perfectly honed just yet. There are two shooting metrics that tell us of a player who needs to work on both his shooting accuracy, as well as the positions from which he decides to have a crack at goal. 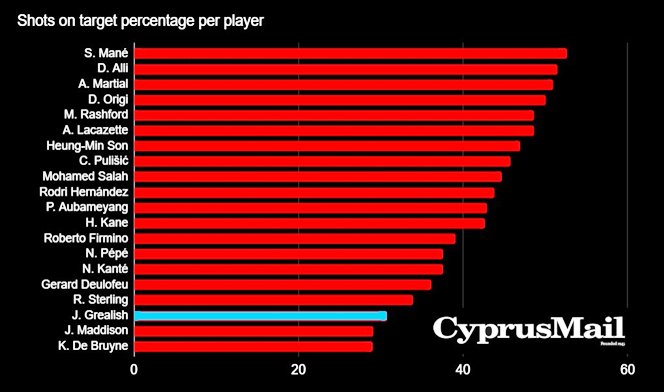 It’s normal if a player has a low shots on target percentage if the average volume of shots is high. The more shots the likelier it is that some won’t hit the target.

However, when a low shot accuracy percentage is combined with a low average volume of shots, then there’s something that the player must definitely try to focus on.

As with every single piece of statistical information, his shooting metrics are somewhat bound to the context of the team he finds himself in and the quality of the opposition they’ve faced. That said, even with this in mind, his shooting is something that can noticeably be improved.

The recent car accident after an ill-advised social outing has already been mentioned. The disappointing thing about it in the grand scheme of things is that it came after a two-year period in which Grealish appeared to mature as a professional.

Most of his previous misadventures came before the beginning of the season prior to the last one. There were three key incidents that gave Grealish a sub-par reputation.

In 2015, he was sighted at a Manchester bar hours after his team had lost 4-0 away from home. Manager Remi Garde banished the player to the under-21 squad after that incident.

Meanwhile, in 2016, he and some of his friends caused a disturbance at a Birmingham hotel with a party that reportedly got out of hand. Pictures of a drunk and unconscious Grealish made their way to the tabloids.

At the time, his then manager Roberto Di Matteo stated: “In general for the sake of any player they need to learn about what it takes to be an athlete. He needs to grow up very quickly. It’s not the first time and he needs to understand if he wants a good career he has to stop. First, it’s a feeling of disappointment. I expect all players to behave in a professional manner at all times.”

Furthermore, in 2017, England under-21 manager Aidy Boothroyd dropped Grealish from the starting lineup after the player arrived late to a team meeting.

Beyond off-the-field behaviour and other disciplinary issues, there is also the concern of being able to step up with the world watching. At Aston Villa, he has gone from flawed prodigy to one of the club’s outstanding players, a permanent fixture in Dean Smith’s starting lineup. He has revelled in that role, but making the jump to a club with a significantly elevated profile brings a kind of pressure few players are equipped for.

However, there are some signs of encouragement. Grealish himself has spoken about his previous behaviour and how he’s striving to improve. In an interview with The Times, the player said: “As I started playing a few games, and did well in the Cup semi-final, I found it difficult. I thought I was still Jack. I thought I could still go to these places, go out and do whatever but I couldn’t because everywhere I went people were just trying to stitch me up. I kept being in the papers for the wrong reasons.I can’t live like when I was 17 or 18. That’s part of growing up. I’ve seen it happen with quite a few other players. But I want to be a role model for kids, and be successful.”

More recently, there have been reports that United and Solskjaer, in particular, were naturally taken aback by the player’s recent troubles, but remained impressed by Grealish’s leadership skills shown during Villa’s promotion to the Premier League.

There was a notable moment during that season. In the derby game against Birmingham City, Grealish was attacked from behind by a Birmingham supporter, who had invaded the pitch and punched the player on the side of his jaw. Grealish remained calm, did not react, and walked away. Later on, he would go on to score for Villa, securing a 1-0 win.

If United are indeed looking into signing him, they could do a lot worse than by taking a chance on the player. He has all the attributes to make a substantial contribution to their cause next season.

However, the potential for the transfer being deemed a success is ultimately linked with how much Villa will be able to command for him.

Should they manage to secure a figure closer to the £80 million mark, expectations would inevitably rise. The pressure of a large transfer fee has often been seen to mentally plague players far more than some fans would like to admit.

Nevertheless, should United manage to acquire the player for a relatively more palatable amount, the odds are in favour of the transfer being seen as an astute piece of business.