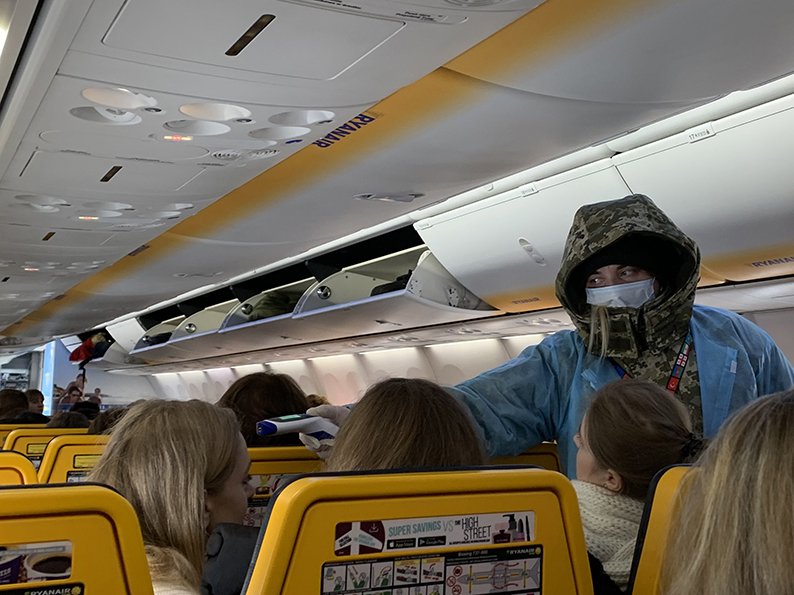 Checking passengers' temperature on board a flight

The ability to travel abroad will be amongst the biggest signs that the coronavirus pandemic is ceasing, but how willing will people be to board an aircraft? And, how much will it cost?

Though it is not yet clear if flying will mean health checks at the airports for all passengers, wearing masks while travelling, or other restrictions, travellers are already thinking about what their future travel plans entail.

Many are saying they will not leave Cyprus, at least for some time, even those who adore travelling. One of those who usually enjoy going to faraway places is Nicosia resident Aneta, 30, whose latest trip was to Cambodia.

“After having travelled six times during 2019, 2020 has been peculiar. I wouldn’t risk travelling at the moment, as overall governments have not yet solved the issues we are facing, and people are behaving quite arrogantly towards the crisis,” she said.

“However, if medical passports came into the equation, which means people with symptoms could not travel, then there might be some countries that I would feel safer travelling to, but certainly I would rather wait until solutions have emerged to help with the crisis first.”

“I would wait till it looked a bit safe and I could still keep my distance,” Julie Dickerson, a British woman living in Nicosia commented. “Obviously living in a different country to my family I would like to think that sometime early next year I will be able to go again. If they continue to fly the planes nearly empty, I would feel easier, but for now I am too scared to even go to the supermarket.”

“I think it is a precondition that one seat in the middle stays empty, and all will travel with masks,” Mary Andreou, 60, commented.

But she has another reason to stay in Cyprus.

“I wouldn’t travel abroad because I want to support Cyprus. We have many places to go, the mountains, the beach…”

“Before October I won’t go anywhere,” said 50-year-old Andreas Georgiou. “And then I will only go to certain countries, to Germany or Scandinavian countries that have a good record, not to Italy or Spain. And I am not paying a thousand euros to go anywhere either.”

Experts say there are ways in which airlines will make the fearful wish to travel again.

In the beginning, flights will be cheap to entice people to let go of their fears, travel consultant Robert Mann Jr believes. “You’ll have to pinch yourself and say why am I not doing this,” he told business magazine Forbes.

Then, though, fares will go up – probably by a lot, as a number of airlines are bound to go bust and fewer routes will be available. Plus, the airlines which survive will need the income to continue doing so.

Is there a chance that airlines will fly nearly empty or at least ensure that passengers sit apart?

“But if airlines leave seats empty to allow for social distancing, either willingly or due to government regulations, for any length of time, that will put pressure on them to raise fares,” aerospace and defence expert Jeremy Bogaisky, writing for Forbes, commented.

In any case, this is already something that is not being followed everywhere at a time when some carriers face bankruptcy and others seek government help.

A Manhattan woman who flew on an American Airlines flight from Miami to LaGuardia this week told the New York Post she was shocked that the flight was packed full — and about half the passengers did not wear masks.

Sara Nelson, president of the Association of Flight Attendants-CWA, which represents flight attendants at about 20 airlines in the US, said that the same thing has occurred on numerous flights over the past week in the country.

The new normal may have unexpected features.

According to a report by Luke Rix-Standing in multimedia news agency PA an Italian design firm has devised a different sort of solution – economy-class seats constructed to shield passengers from infection.

“First there is the Janus Seat, named after the two-faced Roman god, which reverses the centre seat to create an interlocking pattern, in which no two passengers are both next to each other, and facing the same way.”

A curved glass shield would slot around each seat, which could be foldable or slidable, transparent or opaque, depending on carrier preference. All passengers would retain access to the pockets, tray tables and screens that might adorn the backs of the seats in front.

Second is the Glassafe concept, a simple plastic hood providing a physical barrier between adjacent travellers. A so-called “kit-level solution”, the design would be affixed to pre-existing rows of three.

These concepts might not answer all questions, such as if passengers should all be issued with a health certificate before they board a plane, but at least it would do something to solve the issue of keeping a distance while sitting in a crowded plane – for those who can afford the price of a ticket.

Some airlines in turmoil:

British Airways put some 23,000 workers on furlough and announced a restructuring and redundancy programme that could result in 12,000 BA job redundancies.

Ryanair sent an internal memo informing staff that it may require them to take unpaid leave due to alterations in flight scheduling.

Lufthansa grounded its Airbus A380 aircraft, and cut 90 per cent of its long haul travel capacity.

Air Canada announced a temporary layoff of 5,100 employees, suspending most of its international flights.

Air France announced it would reduce capacity by 70 to 90 per cent.

Air Mauritius entered voluntary administration after coronavirus-related disruptions made it impossible for the airline to meet its financial obligations.

American Airlines is cutting its domestic flight schedule by 60 to 70 per cent in April and 80 to 90 per cent in May.

Soon the slogan “all refugees to their homes” will not be required as they’ll all be dead.