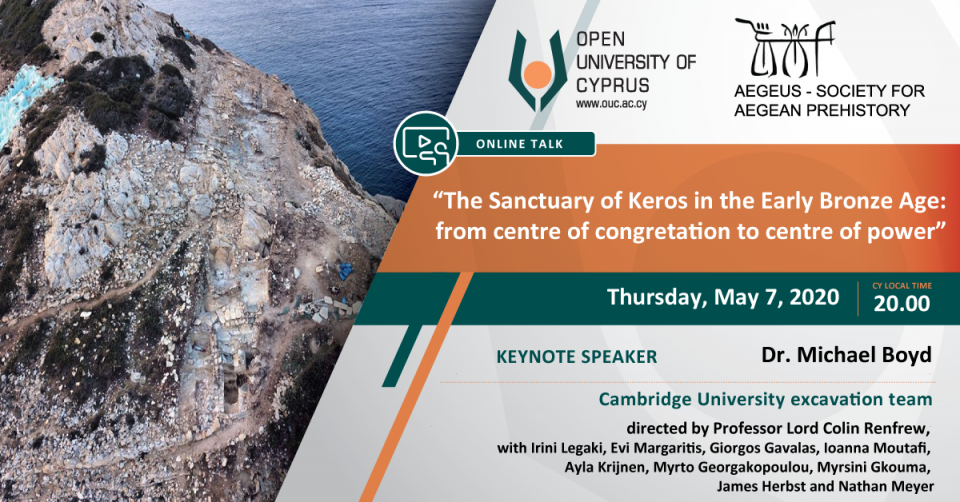 The Studies in Hellenic Culture programme of the Open University of Cyprus (OUC) and Aegeus – Society for Aegean Prehistory will host an online archaeological lecture on Thursday on the excavations by the University of Cambridge at the prehistoric sanctuary of Keros.

The public talk entitled ‘The sanctuary at Keros in the Early Bronze Age:  from centre of congregation to centre of power’ will be held on Thursday at 8pm Cyprus time (6pm UK time) and will be broadcast live on the OUC eLearning Platform https://tinyurl.com/y8y4wskw.

In the third millennium BCE Aegean widely dispersed communities manifested connectivity through perennial gatherings at centres of congregation, such as Keros or Knossos. New excavations at Keros in the central Cyclades offer unparalleled opportunities to investigate the material bases of such connections, and the networks of material, information, people and skills, which were formed and reformed through developing processes of communication.

The settlement at Dhaskalio in Keros shows all the hallmarks of incipient urbanisation, the first such site in the central Aegean, which amidst the flow of goods and people through the site, was quickly established as the premier metalworking centre of the Cyclades.

The Keros excavations of 2016-2018 by the University of Cambridge’s team have shone a rare light on a world in transition, a time when the flow and rapidity of information exchange brought about a first information revolution. The evidence from Keros foreshadows the urbanisation about to occur in the region in the following centuries, a first sign of permanent change at all levels of society.

The Keros projects are based at the McDonald Institute for Archaeological Research at the University of Cambridge.