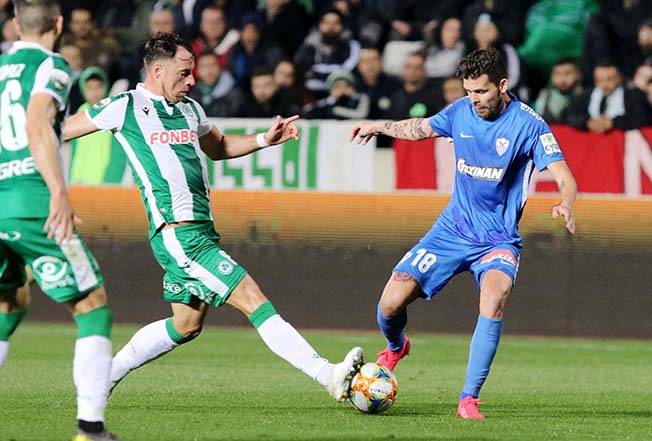 Omonia and Anorthosis were both leading the table with 46 points, with Omonia on top due to a better head-to-head record, when play was suspended in March due to the coronavirus pandemic

The six teams that qualified for the playoffs in the Cyprus football league have held a joint teleconference during which they discussed possible scenarios for the resumption of the championship.

However, the meeting between Omonia, Anorthosis, Apoel, Apollon, AEK and AEL, which lasted two hours, ended in a stalemate, as the clubs could not agree on a unanimous way forward.

Anorthosis and AEK confirmed they would be in favour of the resumption of the league, with the two teams’ presidents Andros Karapatakis and Eugenios Hamboulas saying it would be an unfair ending to the season if it were to be declared null and void.

Apoel and Apollon are also in favour of resuming the championship, but they also expressed serious reservations whether it would be practically feasible to do so, considering the difficulties that will be encountered by players and staff after such a long period of inactivity.

Omonia would also be in favour of the championship getting back underway but only under two conditions, said the club’s president Stavros Papastavrou.

The first condition specifies that, in the case of a resumption, it will be ensured that the championship will be completed and, should that not be possible, he urged that the champions should be the team that is at the top of the table at that moment.

The second condition called for foreign referees officiating all remaining matches of the season.

Omonia and Anorthosis were both leading the table with 46 points, with Omonia on top due to a better head-to-head record, when play was suspended in March due to the coronavirus pandemic.

The only team in favour of the suspension of the championship is Limassol side AEL, who claimed that the financial difficulties faced by all clubs during the forced shutdown would be too high an obstacle to overcome.

The six teams at the other end of the table which are facing relegation in a playoff round – namely Nea Salamina, Ethnikos Achnas, Olympiakos, Paralimni, Paphos and Doxa – are all in favour of the entire season being declared null and void.

The Cyprus Football Association’s (CFA) general assembly will have to communicate a decision on the matter to European governing body Uefa by May 25.

The government announced that team sports training can start om May 18 in open areas without using changing rooms, gyms, and other closed spaces.