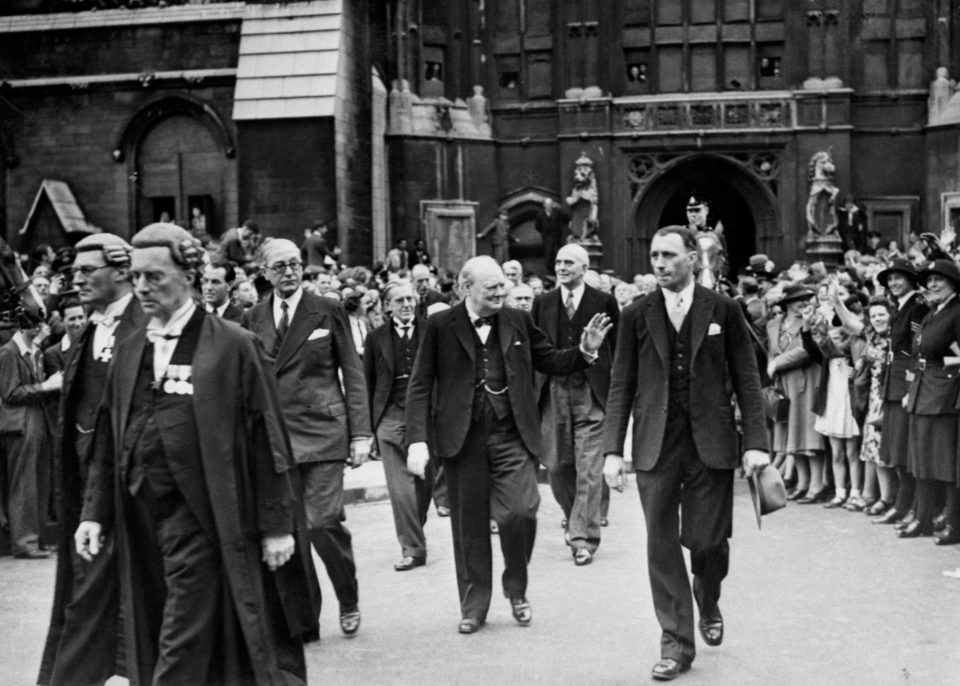 Luke Rix-Standing talks to historian James Holland about the mixed emotions that followed the end of World War Two.

At 3pm on May 8, 1945, Winston Churchill sat in front of a microphone in No. 10 Downing Street, and declared in typically gruff tones that the war against Nazi Germany had been won.

A week after Hitler had taken his own life in a bunker beneath Berlin, the remnants of the regime under Grand Admiral Donitz had surrendered, and the Third Reich was officially no more.

Cheering crowds packed Trafalgar Square, Piccadilly and Pall Mall in London, dancing spontaneously in the roads and frolicking in the fountains. Among the revellers were Princesses Margaret and Elizabeth, allowed to wander incognito amid the throng despite the protestations of the Queen.

In the United States, President Truman gave a similar address from the Oval Office, as party-goers flooded Times Square. “This is a solemn but glorious hour,” he intoned. “The flags of freedom fly all over Europe.” He paid tribute to his predecessor, Franklin D. Roosevelt, who had died in office not a month before.

The public narrative was simple: Germany had surrendered, and May 8 would be Victory in Europe Day forever more. But behind closed doors, the announcement was the result of political jockeying between three of the world’s premier powers.

A group of German generals had actually delivered the official surrender at the allied headquarters in Reims, Northern France, during the early hours of May 7. The difficulty was when and how to disclose it.

“The Russians wanted their own surrender,” says historian and author James Holland, “and in the interests of post-war fraternity, Truman felt their wishes should be honoured. Churchill thought this was ridiculous and they should announce the news immediately, and the to and fro went back and forth all day.”

Neither premier got their wish. The Germans leaked the story to an American journalist in Berlin, who promptly spilled the beans. This proved too much for Churchill, who announced on the evening of May 7 that the following day would be Victory in Europe Day, thoroughly irking Truman, and putting Britain on celebration standby. The Russians eventually held their surrender shortly after midnight, Moscow time, on May 9.

Back on the streets, the conga lines continued unabated, and it was just as well that London’s pubs had run out of ale by early evening. American, British and Soviet flags were sold and waved by the bucket-load, but for many the celebrations caused mixed emotions.

“I remember talking to a friend,” recalls Holland, “whose fiance had been shot down over the Balkans, and she wept for the entire day. I spoke to another lady from Bologna whose whole community had been massacred, so I asked whether she was relieved when the war ended. She said, ‘No, I spent the day in floods of tears. If it could end, why did it have to start?'”

In some places, it hadn’t ended. Truman and Churchill both emphasised that the job was only half-done, and it took three more months and, devastatingly, two atomic bombs before Japan surrendered.

VE Day brought raucous celebration to South Africa, Egypt, Canada, Australia and New Zealand, but in the Asian and Pacific theatres it was a newspaper headline and little more. “If you look at diaries and memoirs by people fighting in Burma,” says Holland, “there’s absolutely no mention of it at all.”

Even for those whose race was run, there was huge fear over what the future held. As soldiers returned to their homelands, rationing initially grew worse not better, and some troops had grown almost institutionalised. “Think about how much had happened,” says Holland, “how much the world had changed. You had to confront all that and get on with ordinary life, and a lot of people felt a terrible anxiety about it.”

In his address, Churchill declared Britain was emerging “from the jaws of death, from the mouth of hell”, and it’s hard to even imagine the mixed emotions that must have accompanied the parties, the speeches, the bombsites and the funerals.

Every victory is also a defeat, and while the world celebrated, Germany lay a broken, burning ruin. Though Nazi high command got their just desserts at Nuremberg, German civilians faced total devastation. Entire cities had been levelled by shelling, and much of the country was overrun by Soviet troops champing for revenge after the record-setting bloodbath on the Eastern front.

Nazi rhetoric had always championed victory or death, and by fighting to the final bunker they ensured the latter came to many. “There were vast numbers of refugees,” says Holland. “The number of suicides is unbelievable, the number of women raped by Soviet troops is unbelievable. It’s hard to impress upon you just how awful the situation was, and for a lot of Germans it felt like the end.”

All the darkness with none of the redemption, VE Day remains a sombre affair in Germany, and veterans have a particularly tough time. British and American troops were and are heralded as heroes, but for Germans their traumas came garnished with guilt and condemnation.

“They had no choice in the matter,” says Holland. “They were conscripts doing their bit for friends and family. They had all the same motivations as allied soldiers, yet were then expected to feel completely ashamed of what they’d done. It was incredibly hard to deal with, and it’s often only in later life that they’ve been able to open up and contemplate it.”

Britain still marks VE Day every year, and the ever-shrinking cohort of veterans lends each celebration a greater urgency.

“The 50th [in 1995] was a big one,” says Holland. “And ever since then we’ve been clinging onto these guys. It was very traumatic when Harry Patch died – that was it, the First World War had passed into history. It’s sad that we can’t celebrate the 75th properly, because the number of remaining veterans is very, very small.”

Instead of the planned parades and patriotic programming, the 75th anniversary comes amid the greatest national crisis since the surrender, and widespread calls to channel wartime spirit. “There are some similarities, as Covid-19 affects the entire nation – every man, woman and child. That’s the key thing,” says Holland.

He adds: “It doesn’t matter how bad the economy gets, or how awful things seem now, the powers of recovery are just astonishing. Germany was utterly devastated, and now it’s one of the preeminent countries in the world.”

Normandy ’44 by James Holland, published by Bantam Press, priced £9.99, is available now. His upcoming book, Sicily ’43, priced £25 (hardback) is due to be published on September 3, available to pre-order now.