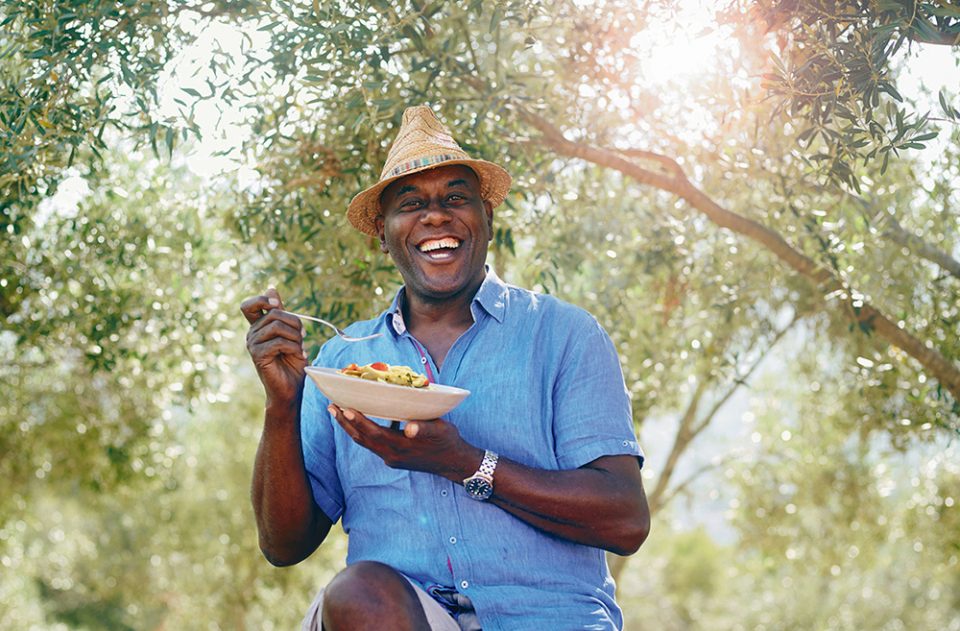 Has there ever been a happier man on TV? Ainsley Harriott, with his broad smile and infectious laugh, was a mainstay in living rooms for years on Ready Steady Cook and Can’t Cook, Won’t Cook back in the Nineties and Noughties, and at 63 he’s as cheerful as ever.

The cook and presenter took some time out the spotlight after the height of his fame but has had a late resurgence with recent TV shows Ainsley’s Caribbean Kitchen and, his newest offering, Ainsley’s Mediterranean Cookbook.

“It felt close to home,” he says of the food of the Med. “There’s a familiarity, being trained as a French chef all those years ago. It’s a wonderful melting pot of cultures.

“Everybody has their own identity, but what comes across stronger than ever is how people are passionate about local produce, about where their food comes from – and the closer it is, the better.”

The new series sees Harriott travel to regions linked by the Mediterranean sea, from the French island of Corsica, and Sardinia and Andalucia to the coast of Morocco and Jordan.

He regales stories of the food producers he met; a former rugby player in Corsica who now runs his family’s olive oil business, a Granadian man who used to be fit before he opened a deli with his wife and now spends all day tasting Iberico ham and breads or de-stoning a mountain of dates to make molasses in a family home in Jordan.

The accompanying book is packed with recipes he picked up along the way, or inspired by the produce and people he met; seafood paella from Andalucia or harissa lemon chicken skewers with aubergine from Morocco.

“It’s classic fare, yes, but crucially doable for most people at home.”

This is food, he says, that’s easy to understand and easy to get hold of.

The Mediterranean diet is often touted as being one of the healthiest in the world, but while there’s incredible seafood, fresh veg and olive oil aplenty, Harriott adds that “obesity is everywhere, don’t kid yourself”.

Preheat the oven to 200°C/180°C fan/gas 6. Line an ovenproof dish with baking parchment. Season the fish fillets with salt and pepper and squeeze over a little lemon juice. Set aside.

Layer the potatoes and onions in the bottom of the lined ovenproof dish, season well with salt and black pepper, then add a layer of tomatoes.

Sprinkle over the garlic, then place a few lemon slices on top. Drizzle over the oil, squeeze over some more lemon juice and pour in the wine. Add the bay leaves and thyme sprigs, two tablespoons of the parsley and sprinkle over half of the marjoram leaves. Season well with salt and pepper, cover with foil and bake for 25-30 minutes.

Remove the dish from the oven and lay the fish fillets in the dish skin-side up. Sprinkle with the remaining marjoram and bake uncovered for a further 12-14 minutes or until the fish is cooked through (it should flake easily when cooked). Use a spatula or fish slice to carefully remove the fish from the dish, cover loosely with foil, and keep warm.

Return the vegetables to the oven to bake for a further four to five minutes (if needed) until the potatoes turn golden brown in places. Remove from the oven and serve immediately, scattered with the remaining fresh parsley, with some fresh bread on the side.