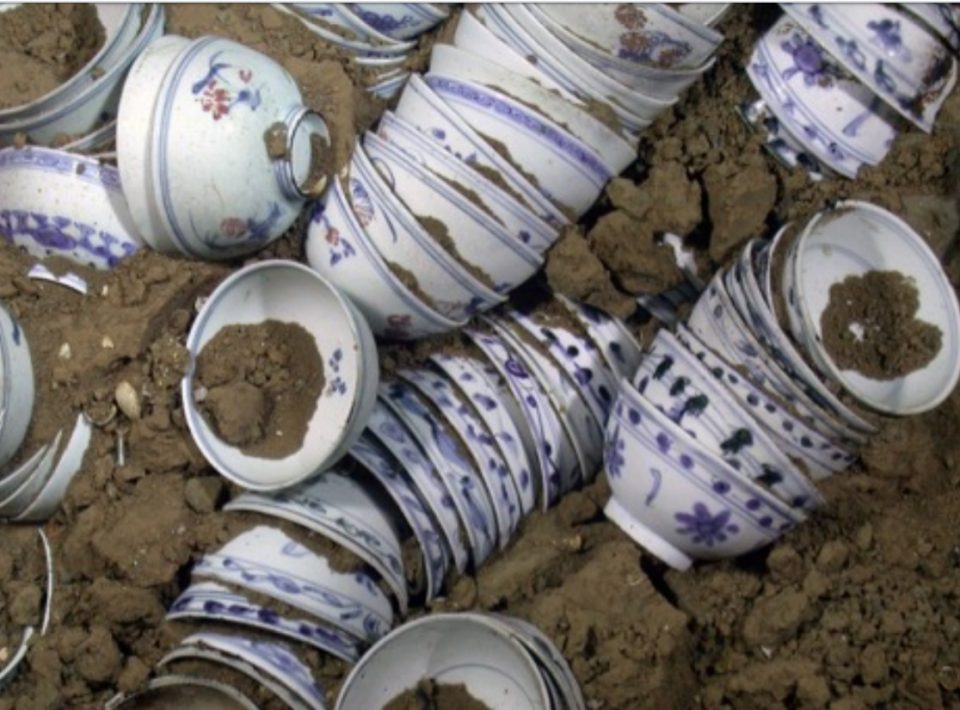 Controversy continues to swirl around the discovery in the murky depths of the Mediterranean of a 17th century Ottoman shipwreck in the Lebanese EEZ and the subsequent confiscation of its salvaged cargo by customs officials in Limassol.

News of the recovery of the artifacts and their confiscation at the end of 2015 recently resurfaced in the wake of a press release issued by Enigma Recoveries, the London-based company that funded the underwater exploration of the site.

Enigma hailed the discovery as a “once in a generation find that tells the story of the beginning of the globalised world”. The company claims the legal problems it has encountered in Cyprus were the result of a simple administrative mistake.

The department of antiquities, which currently has custody of the 588 artifacts confiscated in Limassol port, has a decidedly different take. It accuses the company of carrying out illicit underwater excavations. Furthermore, the department claims that the people responsible for the underseas operation are no more than professional treasure hunters, motivated solely by their pursuit of a profitable pay-off.

The Sunday Mail has learnt the department is preparing for a legal battle with the British company and its claims to rightful ownership of the centuries-old objects. At the same time, the foreign ministry is pursuing the matter with the Lebanese government to try and dig up more details about the excavation and the ownership claims.

“This is a very complex case. It will be solved only when it gets to court,” an official from the department of antiquities told the Sunday Mail.

Enigma Recoveries insists that since the shipwreck was discovered in waters of the Lebanese EEZ, the excavation project was completely legal. It also claims it has informed Beirut about the discovery.

“Under international law and agreements, primarily the UN Law of the Sea Convention, nations’ rights and controls over the EEZ are limited to natural resources such as fishing, gas, oil and minerals extraction. Shipwrecks and cultural remains are excluded from this legislation,” Enigma said.

But Mariano Aznar, professor of international law at University of Jaume in Castello de la Plana in Spain, disagrees and says that the issue is somewhat murky.

“Why the Lebanese authorities didn’t react [to the excavations]?,” he asks rhetorically.

“It is true that a coastal state has full sovereignty in its territorial sea, then limited rights in contiguous zone and then in the EEZ and continental shelf – sovereign rights of exploration and exploitation of natural resources plus the jurisdiction over any activities which may interfere with its sovereign rights to natural resources. Underwater cultural heritage is not natural resource so the jurisdiction over it is unclear but the coastal state has exclusive jurisdiction over any kind of scientific research in its EEZ and continental shelf. I would expect that once the vessel was there doing its research, Lebanon should have asked what they were doing there. Have they done it? We don’t know,” says Aznar.

Media reports indicate that Odyssey Marine Exploration, the company contracted by Enigma to conduct the underwater exploration in Lebanon’s EEZ, sent its vessel Odyssey Explorer to Lebanon in early 2009 to help in the search then underway for the Ethiopian plane that crashed into the Sea shortly after take-off from Beirut airport. According to reports, the vessel returned in 2010 to conduct a video survey and photo-mosaic of the entire area of the wreckage and debris field. There is some speculation that it was during this assignment that the Odyssey identified the location of a dozen shipwrecks. The ships, lying 2,000 metres below the surface, originate from different periods – one Hellenistic, two Roman, one Umayyad and eight Ottoman vessels.

The largest is the 43-metre-long Ottoman trading vessel that is believed to have sunk around the year 1630 on its way from Alexandria to Istanbul.

The scientific team aboard the Bahama-flagged Odyssey Explorer carried out their excavation of the Ottoman vessel in October to December 2015. They removed 360 pieces of Chinese Ming porcelain, a crate of Ottoman clay tobacco pipes, plus glass and ceramics from various European and Middle Eastern countries.

In between excavation activities, the Odyssey Explorer regularly docked in Limassol where she stocked up and refuelled before returning to the exploration site.

It was during one such stop-over that Cypriot customs officers boarded and searched the ship. They found 57 crates full of artifacts that had been recovered from the shipwreck, none of which were listed on its manifest.

“With the live project continuing into January 2016, and the research ship entering and departing Cyprus multiple times, the ship’s crew was not aware Cyprus required the cultural artefacts recovered to be listed as ‘cargo’,” Enigma Recoveries explained in a statement to the Sunday Mail.

“The confiscation of the artifacts was thus a result of an administrative misunderstanding by the contractor concerning the cargo manifest. Odyssey Marine paid a fine for the apparent administrative transgression. Cyprus Customs nevertheless chose to retain the artifacts. Legal representation has been retained in Cyprus to reasonably and justly reach a mutually satisfactory conclusion to this misunderstanding,” it added.

However experts contacted by the Sunday Mail claim the issue is much more complex, starting with the fact that the company [Odyssey Marine] operating with its cutting edge equipment and expert ability to salvage deep-water shipwrecks is regarded by many as pursuing its treasure hunting activities for profit rather than preservation. Not the stuff of Indiana Jones, they might suggest.

Among past projects conducted by the Odyssey, one of the best known is “the Black Swan”. This involved the 2007 discovery and recovery of an estimated $500 million worth of silver and gold coins from the Spanish frigate Nuestra Señora de las Mercedes, which sank off Portugal in 1804. Initially Odyssey kept the origin of its ‘find’ under wraps until eventually ordered by a court in the US to return the treasure to Madrid. Odyssey was also told to pay Spain $1 million for “bad faith and abusive litigation”.

Enigma said its Mediterranean “fieldwork was archaeological in nature and not salvage”, and that at all times it “applied high-quality recognised scientific standards.” Moreover, this was a one-off project and Enigma no longer has any contractual arrangement with Odyssey

“Enigma Recoveries is committed to keeping the artifacts together as a single collection and to seeing the finds and the story of their discovery and history presented in a major museum. We have held promising talks with several institutions around the world, which have all expressed great initial interest. It is not realistic to proceed while the artifacts are detained in Cyprus,” the company said.

However, a financial report filed by the Odyssey company in 2009, shows that a contract on the search for the Enigma shipwreck was signed with the UK firm Robert Fraser Marine Ltd (which is also listed as one of the directors of Enigma Recoveries) and client companies of the investment consultancy Robert Fraser & Partners.

In an interview with the Wall Street Journal in 2010, Colin Emson, Chairman of Robert Fraser, talking about this particular project, said his firm participates in such treasure hunting projects only when the anticipated profit is 10 times costs.

Associate Professor of Maritime Archaeology at the University of Cyprus Stella Demesticha is to the point about profit and the difference between scientific archaeological research and treasure hunting.

“Treasure hunters want to make a profit which is absolutely not acceptable for any legal authority or scientific body,” she said.

“Salvaging at all costs and of course selling is the wrong approach. Mounting an exhibition or issuing a publication at a later stage cannot justify this procedure. Putting a price tag on antiquities is against the very notion of cultural heritage because cultural heritage is not ours to sell. It is there for the next generation. The trade of antiquities is illegal, unethical and should stop.”

Demesticha also raised questions about the necessity of removing the artifacts from the Ottoman shipwreck.

“Excavating in the deep, in particular, is a very expensive, laborious and difficult task. It can easily jeopardise the integrity of a sensitive and fragile site, such as a shipwreck. Of course, there are cases where excavation is the only way to go. For example, when a site is found during construction works and needs to be removed for the works to continue. But the only danger that deep-water sites face is off-shore drilling, so looting and artifact removal in such conditions is hardly justified.”

Associate professor and head of the Division of Mediterranean Underwater Cultural Heritage at Akdeniz University in Turkey Hakan Oniz agreed.

“We are scientists and our duty is to protect the underwater cultural heritage. Governments have to be more aware of these treasure hunting operations and give more support to our work at universities, so that we have access to the same technological equipment as treasure hunters. Scientists look for information and history. Treasure hunters are not really interested in such things.”

He noted that the news of the discovery stirred up considerable interest in Turkey.

“We are working on finding more data on this shipwreck. There are thousands of records in the Ottoman archives in Istanbul – we can learn the name of the ship and her owner and more about the cargo. We are working on it.”

Tales from the Coffeeshop: Time for greed and profit to reclaim their crowns