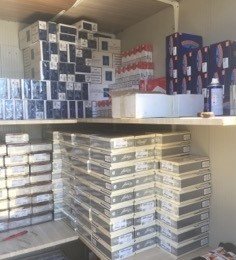 A 56-year-old Greek Cypriot man was remanded on Sunday for five days in connection to the discovery in Limassol of large quantities of cigarettes and tobacco and unlicensed pharmaceutical products.

Limassol police and customs on Saturday confiscated a haul consisting of 137 kilos of rolling tobacco, 75 kilos of nargile tobacco, 736 cartons of 200 cigarettes each, 225 boxes each containing 200 packets of Heets, and 300 packs of erectile dysfunction pills each containing 100 tablets.

Customs said the tobacco products contained a health warning only in Turkish, indicating that the stash had come illegally from the north.

The 56-year-old was arrested for avoidance of customs duties and taxes, illegal possession of contraband, and violation of the Green Line Regulation.

Customs estimated the loss in taxes and duties to the state was in the region €70,000. The items were confiscated and destined to be destroyed.

The man reportedly claims he procured the items legally.