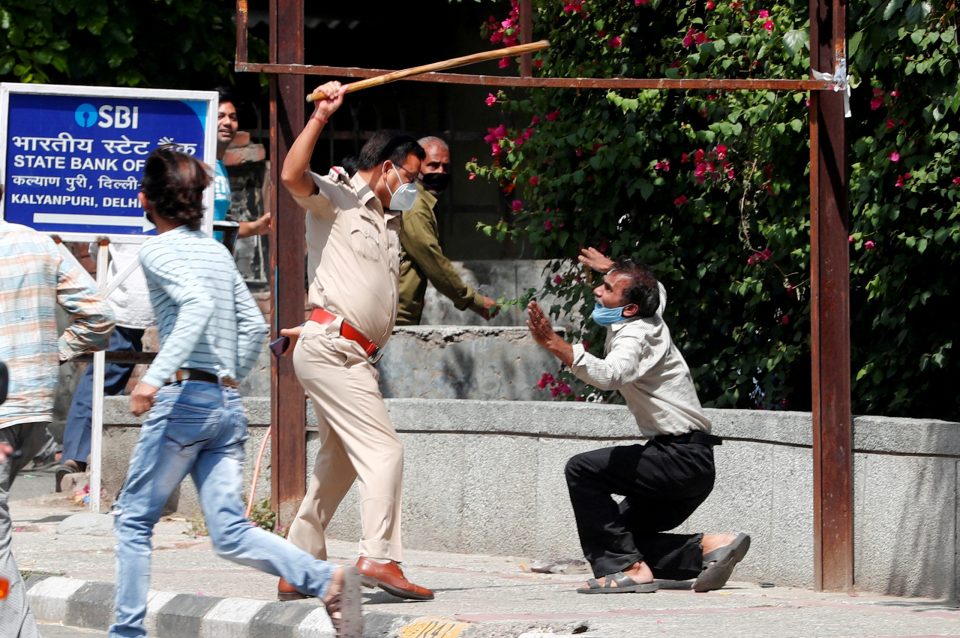 This is how Indian police dealt with people violating the curfew. At least our cops just issued a fine

THE COMMIES of Akel and the social media experts uncovered a new enemy of the people this week – the Federation of Employers and Industrialists, better known by its Greek acronym OEV. The sinister capitalist that make up OEV, according to the defenders of the people, were behind the government’s cruel decision to open all public schools on May 21.

A letter to the ministers of finance and labour from OEV said that without the opening of the schools and especially “kindergartens and primary schools, it is impossible for the smooth carrying out of economic activity to be restored”. This activity was “in a desperate situation because of the crisis”, said the letter.

This was what persuaded Prez Nik to announce the opening of all schools at the meeting he had with teaching union bosses as well as representatives of parents’ associations and students, claimed Akel, on the front page of its mouthpiece Haravghi carrying the dramatic headline, ‘They heard OEV instead of the epidemiologists.’

Meanwhile, the paper’s lead columnist concluded her article with the predictable, “The powerful economic interests decide AND govern.” The powerful economic interests had put their profits above the health of the people was the message of the Akelites for whom “the protection of the health of children, teachers and their families is the first priority.”

This has been the priority for two months. It is high time we made greed and profit the first priority again.

WELL DONE Nik for listening to OEV instead of the epidemiologists and the lazy teachers, who wanted to extend their time off school until September. Without jobs to go to and no incomes we are all going to die, but not as a result of Covid-19. It is that old joke about the operation being successful even though the patient died.

There was another positive aspect to Nik’s alleged volte face. It really pissed off the teaching union bosses who had gone to Wednesday’s meeting certain that the only decision that would be taken was for their sterile dialogue to continue with the education minister about why the schools should not open.

Yet another positive aspect was the union bosses protesting that they had been lied to by the minister Prodromos Prodromou, who had allegedly told them before their meeting with Nik that the schools would not reopen. If he die lie to them, he had only done to the union bosses what they had done to him on several occasions in the past.

Of course, as the epidemiologists would say, nobody hates being lied to more than a liar.

CORONAVIRUS celebrity, professor  Leontios Kostrikkis expressed surprise over Nik’s decision to open all the schools, because “the opening of the schools for the younger children on the 21st was not on the road map the epidemiological unit gave the state.”

Speaking to his favourite newspaper Phil, he said the scientists had decided “that any relaxations in the future would be done only after the evaluation of the epidemiological situation before every phase.” The government had quite clearly ignored the scientists in the case of the schools.

“Therefore, regarding the opening of the schools, this would only be possible when the scientific team evaluates the epidemiological picture before this phase and gives the green light.”

No concessions were made by the power-tripping Kostrikkis to the elected government. Only when the wise scientists gave the green light would the government be entitled to open schools. To me this sounds like fascism – only the scientists can decide what is good for us, after evaluating the epidemiological picture of course.

Anyone can evaluate the epidemiological picture now. There were five new cases on Wednesday, six on Thursday, two on Friday and one on Saturday. This picture suggests the epidemiologists can go back to their labs, stop demanding to green light government decisions and only return to the airwaves if and when the confirmed cases hit double figures again.

APART from businesses another victim of the coronavirus is Okypy, the state health service which had been mismanaging state hospitals for some time now and presided over the closing of all state hospitals during the worst health crisis to hit Cyprus. It really could not have done any worse than it did, with all state hospitals out of action for most of the lockdown period.

As usual the private hospitals saved the day with all urgent cases being sent to them by the health ministry for treatment and operations. Okypy meanwhile, was presiding over empty hospitals dealing only with Covid-19 patients, the number of which was pretty small.

Even the Akel chief, comrade Andros, who on Friday issued a party missive on what should be done about hospitals, attacked Okypy for failing to meet the challenged of the pandemic, accusing it of inadequacy, prevarication and heavy-handedness. The government needed to hire more staff for the service to work better and change its board.

Okypy may be a bunch of incompetents (what is view of the epidemiologists?), but it has to be said, managing heavily unionised hospitals of public employees, accustomed to doing whatever they like, would be impossible even for graduates of the world’s top business schools.

State hospitals employ close to 6,500 people of whom 6,200 have civil servant status, which means they are not only unmanageable but also untouchable.

NOW Okypy has announced plans to hire 300 nurses to fill vacated positions and cover its future needs. This means that all the experienced nurses that work in private hospitals would move to the state hospitals because they will receive a wage that is 50 per cent higher than what they receive now. If private hospitals want to keep the nurses, they will have to up their wages, thus increasing their operational costs and prices they charge patients. It is a messed up system that gives incentives to nurses to work for hospitals at which their productivity would fall by at least 50 per cent while their pay would increase by 50 per cent.

And if there is a surge of coronavirus cases, public hospitals will have more staff doing nothing than they had in the first phase of the crisis.

WITH THINGS not going well for the media, the Dias group decided to make some money by putting in an offer for the 9 million face masks the government decided to buy. The tenders were opened at 11pm, but the Dias group’s bid was not the lowest; the lowest was 44 cents.

At 11.05 a telephone call was received from on high asking what the bids were. Five minute later, the Dias group submitted a new bid which, at 42 cents, was the lowest. But it still did not land the order, the authorities deciding that it was received after the deadline. The group’s supreme ruler, Zeus is not as powerful as he once was.

Seeing a giant billboard on the Gavrielides building in Nicosia, featuring Sigma TV news presenter Chrysanthos Tsouroullis wearing a face mask, I could not help wondering whether he was being used to market the face masks of his employer, the Dias group.

THERE is a sign of desperation in the efforts being made by Foreign Minister Nicos Christodoulides to get some publicity, the coronavirus crisis having deprived him of any political role. It is very much a case of how the mighty have fallen.

Three months ago you could not turn on a radio or television without coming across him, but now he really has to work at getting a bit of exposure. Even the hacks that would call him for exclusive comments have abandoned him, as the coronavirus has overshadowed everything and nobody is interested in what targeted measures Christodoulides intends to impose on Turkey for the violations of our EEZ by the Yavuz.

He has been replaced by Professor Kostrikkis in the affections of Phil, once his most zealous cheerleader. Now he will consider himself lucky if his platitudes, that were once front-page new, get a brief mention on an inside page.

On Friday he gave an interview to our Tass news agency, who apparently had asked him to “comment on the consequences of the pandemic on the international political chessboard.” He replied that “after the pandemic we will see changes both at international level and in relations between states.”

As long as Kyproulla does not relinquish the geostrategic significance it acquired since Christodoulides became foreign minister, we will all be happy.

Battle over shipwreck treasure: ‘Cultural heritage is not ours to sell’