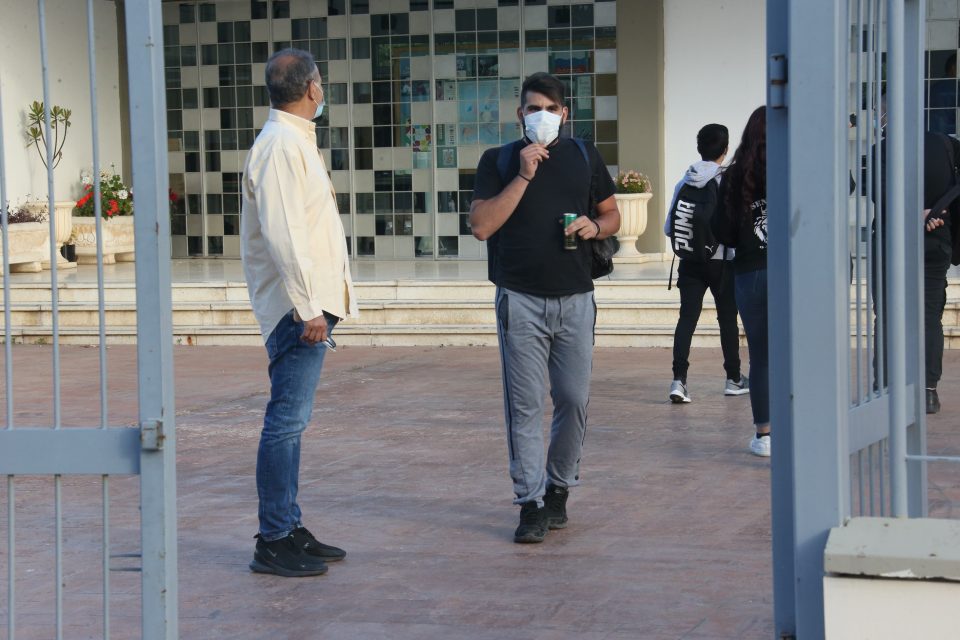 Nearly 7,000 lyceum and technical school final year students returned to school on Monday after an absence of almost two months, but students and teachers alike complained social distancing and online learning was patchy at best.

According to Education Minister Prodromos Prodromou, 5,600 went back to lyceums and 1,300 to technical schools, about half of all students in this year under an alternating system in which students split their attendance into two to three-day sections.  He said nearly 1,000 private secondary school students also returned.

To ensure social distancing measures were in place, the remainder stayed at home where they were supposed to be able to follow the lesson through teleconferencing. Students at home would only be able to see the teacher and follow the notes on the whiteboard.

Prodromou, during a visit to Apostolos Markou lyceum in Nicosia in the morning, said everything was going well, with 95 per cent of teachers and students attending school. He also observed a physical lesson being taught which was also available on Microsoft Teams for those whose turn it was to stay at home.

He insisted that “everything is running smoothly”, but this was contradicted by a student at the school he visited.

The student at the lyceum complained that social distancing was not being observed.

“Most were not wearing masks, and were touching each other. Some were careful but most couldn’t care less,” said Artemis, 17. “Some teachers were wearing masks, not all. It was not the best environment, I didn’t feel safe. The only class I felt safe was by a teacher who is in the vulnerable group and who was strict.”

She also said in none of the four classes she took on Monday morning was Microsoft Teams teleconferencing involved, and there was no way the students who were not at school could follow the lessons.

A headmaster at another Nicosia school said he had only heard of the Microsoft Team plan for those whose turn it was to stay at home when the minister made the announcement at lunchtime on Friday.

“We don’t have cameras, microphones and the budget to buy them,” he said. “You have to be patient. We are trying to meet all the measures, so nobody dies.”

His school was unable to provide any distance learning for those whose turn it was to stay home on Monday.

Student union Psem also reported there were many problems.

“No precautionary measures other than distance maintenance and frequent hand washing. In no school was there a stock of masks and gloves for all students except in some cases in which the principals themselves, at their own expense, provided the students with gloves and masks,” the group announced.

Many students also did not attend classes because they were reluctant to use buses, while a number of teachers did not teach as they belong to vulnerable groups, Psem added, contradicting the minister’s statement that all, or nearly all, were at school.

Prodromou, however, insisted that the reopening of schools went well and addressed those who doubted that distance learning could be done.

“When we began in March and said that distance learning would take place, many laughed and said this couldn’t be done. It is happening,” he said.

The minister also explained that tests for Covid-19 in the education sector would take place in the coming days. They will be done on a sample basis and not only for the final year students, he added.

“As they [tests] are being done in the general population, but at schools it will happen with greater density … and periodically.”

As part of other measures to ensure safety at the schools, periodic checking of students’ temperatures will also take place.

Under the new system there is a maximum of 12 pupils per classroom, and desks have been spread out.

Half the students will attend school on Monday, Tuesday and Wednesday, the other half will return on Thursday and Friday. Next week the days will be swapped. They are being taught lessons to prepare them for exams only, from 7.30am until 11.30am.

On May 21 all schools will reopen and the academic year has been extended until June 26. The Pancyprian exams will start on June 9, the minister announced last week.

Eco-friendly and chic, raffia is taking over fashion