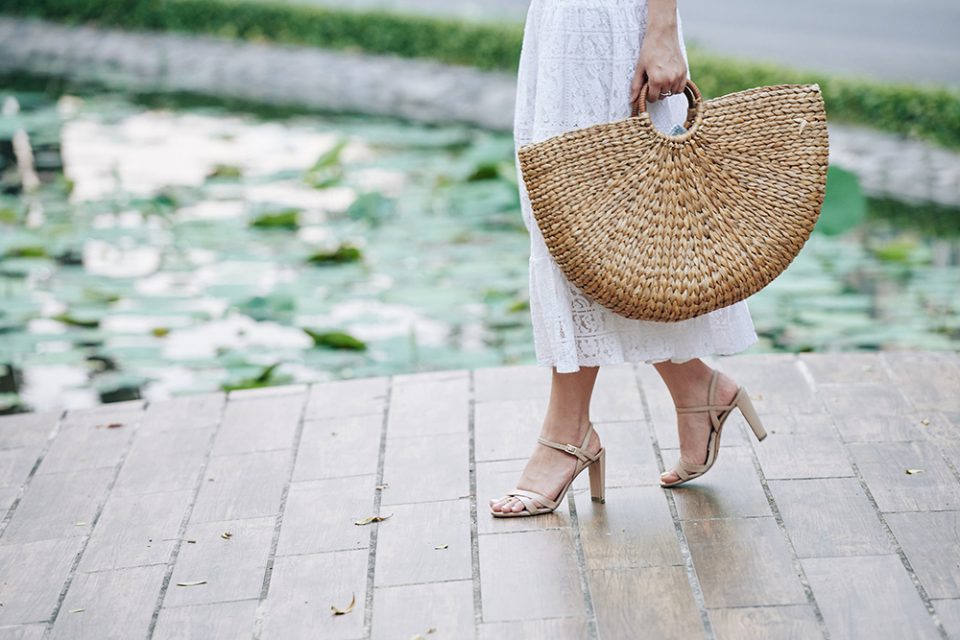 A lot of fashion’s power lies in escapism. Telling a story through your clothes, or transporting you somewhere else – and in times like this, some fashion escapism can feel even more important than ever, helping to boost your mood and whisk you off on a virtual holiday.

This is where raffia fits in perfectly: the material which took over the spring/summer catwalks, with a beachy and eco-friendly vibe.

Trendsetting brand Simone Rocha – loved by it-girls like Chloe Sevigny and Lily Cole – spearheaded the obsession for raffia in their SS20 London Fashion Week show, creating whole outfits made from the material. Raffia dresses aren’t the most wearable of things, but designers are championing the material through accessories.

Fendi, Valentino and Stella McCartney all sent straw-look bags down the runway, and JW Anderson and Armani showed us how raffia can bring a modern spin to summer footwear.

Over the past few years, the fashion industry has become increasingly introspective about its environmental impact – an issue which has really come to the fore during the coronavirus crisis. While there is evidently much work to be done – the industry is still considered among the most polluting in the world – certain designers like Stella McCartney have championed a more eco-conscious approach.

A major aspect of this is thinking about the materials used in production, which partly explains why raffia has become so popular. Raffia comes from a certain type of palm tree, which is native to Madagascar and grows across Africa. A fibre is extracted from the tree and woven to make everything from clothes to mats and hats. Even though straw and raffia come from two different plants, they look similar and have been used almost interchangeably in fashion over the years.

Straw has been around for a while but often has a slightly dated reputation – think the sort of floppy hats your nan wears to the beach. Now though, along with raffia, it’s been given a modern, fashionable update. Here’s how to wear it…

The most popular way to get in on the raffia trend is through bags – it was seen on almost every runway, from Miu Miu and Jacquemus, to D&G and Lanvin.

There are two ruling styles here: big and little. On the one side, you have the tinier bags, often clutches or small pouches with an extra long strap to wrap around your body. A mini bucket bag also proved popular on the catwalk – it’s the kind of silhouette you normally only see made out of leather, and the straw versions are a youthful interpretation of the classic style.

Luckily, there was also a more practical style of raffia bag: a bigger, slouchier version. These looked much more like beach bags – often with logos printed on them for that extra cool factor – and are a modern take on the boho bag.

Of course, few bags are entirely made out of straw, which is why it’s important to keep the other materials as natural-looking as possible in soft browns, tortoiseshell and other earthy tones.

Shoes entirely made out of raffia sound pretty uncomfortable, which is why the trend errs towards subtle accents when it comes to footwear. This could be a woven heel or a straw-based section of the shoe.

Raffia is a distinctly summery material, which means it works particularly well with beachy styles like sandals or wedges. It’s the perfect way to give a boost to your holiday wardrobe – or at the very least make you feel bang on trend when you walk round the block.

Another great way to wear raffia is through headgear, whether that’s a hat or headband. And yes, it is possible to do a straw hat without looking like too much of a holiday cliche.

Instead of sticking to a predictable floppy straw style with your headwear, choose interesting details to make it look fresh. This could be geometric cut-outs or pearl additions – it doesn’t have to be anything too OTT, but enough to put a modern spin on the classic straw hat.

If a straw hat really isn’t your style though, you can still get in on the trend with a simple headband made from raffia. The neutral colour means it matches anything you wear and looks good against all hair shades.

Coronavirus: Students return but complaints that online learning for those at home failed (Updated)