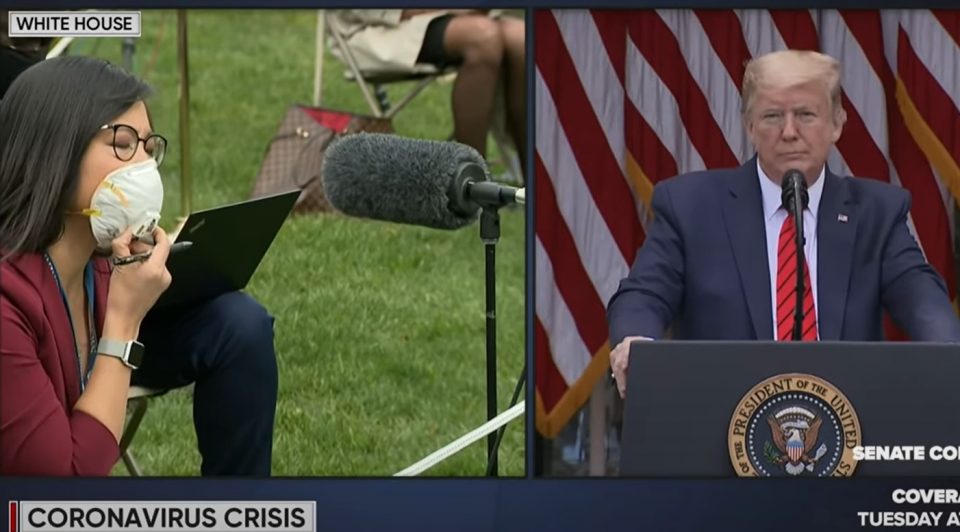 Weijia Jiang of CBS asked Mr Trump why he was placing so much emphasis on the amount of coronavirus tests that have been conducted in the United States.

“Why does that matter?” Ms Jiang asked.

“Why is this a global competition to you if everyday Americans are still losing their lives and we’re still seeing more cases every day?”

Mr Trump replied that “they’re losing their lives everywhere in the world. And maybe that’s a question you should ask China. Don’t ask me. Ask China that question.”

He called for another question, and there was no immediate response.

“Sir, why are you saying that to me, specifically?” Ms Jiang asked.

Ms Jiang, who has worked for CBS News since 2015, was born in Xiamen, China, and emigrated to the United States with her family aged two.

Mr Trump said he would say that to “anyone who asks a nasty question”.

“It’s not a nasty question,” Ms Jiang said. “Why does that matter?”

Mr Trump again asked for another question, then said, “Nah, that’s OK” and waved off CNN’s Kaitlin Collins when she approached the microphone.

“You pointed to me,” Ms Collins said.

The president said: “I pointed to you and you didn’t respond.”

Ms Collins said she was giving Jiang the time to finish her questioning, and added: “Can I ask a question?”

With that, Mr Trump called an end to the news conference, held in the White House Rose Garden, and walked away from his lectern.

Ms Jiang and Ms Collins wore masks to the news conference, as did most reporters, following the recent news two White House employees – an aide to Vice President Mike Pence and a valet to the president – had tested positive for the coronavirus.

The exchanges came after Mr Trump insisted his administration had “met the moment” and “prevailed” on coronavirus testing, even as the White House itself became a symbol of the risk facing Americans by belatedly ordering everyone who enters the West Wing to wear a mask.

Mr Trump addressed a Rose Garden audience filled with mask-wearing administration officials, some appearing publicly with face coverings for the first time during the pandemic.

The startling sight served only to further highlight the challenge the president faces in instilling confidence in a nation still reeling from the pandemic.

Mr Trump himself, not wearing a mask, sought to emphasise to the American people the steps being taken to ensure their safety – in hope that will coax them to resume normal activities.

A shortage of coronavirus testing has long been a sore spot for the president, but he insisted anew that everyone who wanted a test could have one.

The pledge, first issued by Mr Trump more than two months ago, comes as governors across the country continue to call on the federal government to do more to boost supply to meet the requirements needed to begin “reopening” the nation.

The upbeat message was undercut by the new protective measures implemented to keep Mr Trump safe, evidenced by the absence of Mr Pence and three of the nation’s top medical experts, who were in various states of isolation after the cases of Covid-19 were confirmed among staffers in one of the most-protected complexes in America.