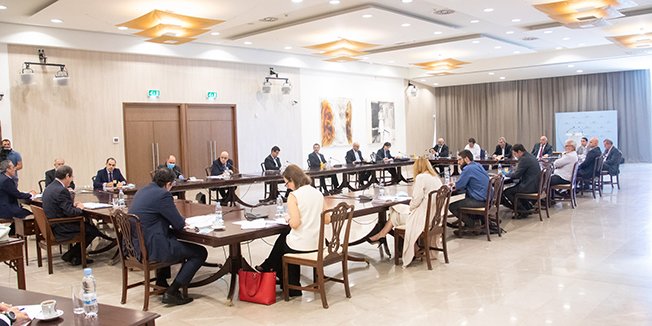 Indications are pointing to the immediate cancellation of the Cyprus football season following a meeting between President Nicos Anastasiades and Cyprus Football Association President Giorgos Koumas on Thursday at the Presidential Palace.

According to reports, the government did not accept the CFA’s safety protocol, which differentiates from the government’s own public health guidelines.

What this means is that the government is not advocating for cancellation per se. It has presented the CFA with the guidelines the latter’s own protocol needs to be aligned with.

Specifically, epidemiologists deemed the CFA’s proposal around a player testing positive for the coronavirus to be a red line which could not be breached. The CFA proposed that in that instance, only the player should be quarantined and monitored, instead of the entire squad.

Following the meeting, the CFA will urgently convene to decide on what comes next, with a statement declaring the season over the likeliest outcome.

In terms of European competitions, the current standings will be locked in, meaning that Omonoia will qualify for the Champions League, with Anorthosis, APOEL and Apollon qualifying for the Europa League.

AEL and AEK will be awarded 50,000 euros each in compensation for forfeiting their chances of qualifying for Europe.

After the meeting, the Pancyprian Footballers Association (Pasp) called on the CFA to recommence the season, citing that President Anastasiades and the team of epidemiologists have given the green light for that to happen.

PASP mentioned that epidemiologists reconfirmed that clubs are allowed to train players in groups of five, while from June 9 onwards full-size pitches and training facilities can be used normally.

Based on the above points, as well as the fact that there’s adequate time remaining, the Pasp reiterated that the season should be completed.

Pasp managing director Spyros Neophytides, who represented the association at the presidential palace meeting in the morning, said: “The President and epidemiologists believe that state guidelines on health and safety cannot be breached, something which finds us in total
agreement. Football and sport in general are not above the rest of society. However, since the president and the epidemiologists said that pitches and club facilities can be fully used after June 9, then players who adhere to health guidelines can train normally.

“Football can recommence and the season can finish”, Neophytides continued, before adding: “I expect the CFA to do the right thing”.

The Pasp also informed FIFPro, the worldwide representative organisation for professional football players, of all the latest developments.