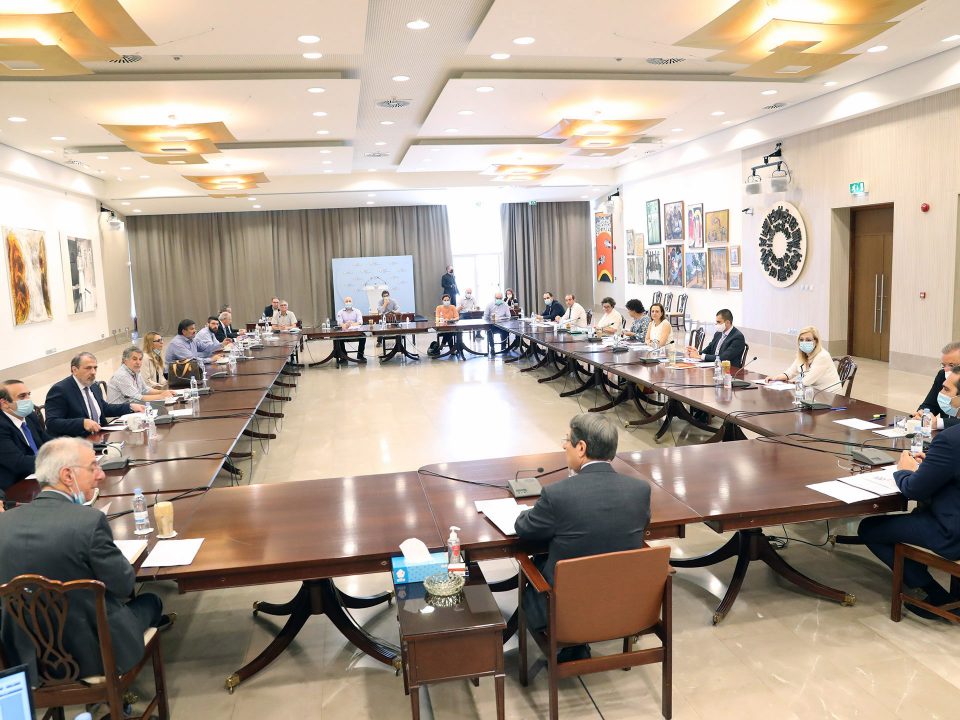 By Andria Kades and Nick Theodoulou

The stage appeared set on Friday for the implementation of phase two of lifting Covid-19 restrictions as scientific experts gave the president the green light, they said and as schools reopening is to go ahead, barring the first and second years of lyceums, and kindergartens.

Announcing three new coronavirus cases Friday evening – figures have remained in single digits since the first relaxation of measures on May 4, scientific adviser Leontios Kostrikis, said epidemiological data was at the right levels to proceed with phase two.

Kostrikis and other advisers met President Nicos Anastasiades at the presidential palace earlier in a meeting that went on for more than three hours, to discuss whether the way was clear to proceed with further lifting of restrictions.

No statements were made immediately afterwards other than those by Education Minister Prodromos Prodromou who announced the opening of schools, excluding the junior levels of lyceum which will continue distance learning, and kindergartens. This was a walk back from earlier statements that all schools would open on May 21. Final-year lyceum students have been back at school since the beginning of this week.

Further news from the meeting did not emerge until Friday evening when Kostrikis hosted the daily briefing on new cases and said the scientific team said they had recommended phase two go ahead.

“The picture that emerges two weeks after the first lifting of restrictions is very satisfactory,” Kostrikis said. “For this reason, the scientific team today suggested to the political leadership the further relaxation of the restrictions. We are constantly monitoring the data and remain vigilant,” he added. Kostrikis cautioned however that a lot depended of the sense of responsibility and the cooperation of the public, though he acknowledged that the behaviour of the public so far gave cause for optimism for the future.

In addition to schools, under the schedule already announced, the second stage of the drawdown – May 21 to June 8, hair and beauty salons will open for business, as will cafes and restaurants– but only with outdoor seating. Gatherings of up to 10 persons will be permitted.

The lifting of restrictions and permissions for outdoors movement were also on the cards, and the night-time curfew was to be abolished. Slated to open on June 1 are libraries, museums, archaeological sites and betting shops.

However, the only official announcement by the government on Friday was related to education.  “Just as we responsibly stayed at home during the first phase, we can now, just as responsibly and securely, slowly return to normalcy,” Prodromou said in televised statements.

For now, students will attend classes on a rotational basis, split into two groups, and will take place weekly – one week on and one week off.

He also said that from Monday the Covid-19 testing programme will continue and be stepped up so as to monitor the situation in the education sector. So far 156 tests have been done in schools on teachers and students, all of which have come back negative.

Prodromou said the government decided to avoid opening pre-schools and kindergartens, taking into account the ages of the children and the challenges that this might present given how young they are.

All decisions took into account “epidemiological data, the experience of other countries that have already reopened schools and the results of large sample testing” of 800 people, including children, he said.

Schools are now operating with updated health guidelines, such as smaller classes of 12 students, and alternating the days on which students attend the lessons in person.

Final-year high school students returned to classes on May 11 and the school year has been extended until June 26.

Meanwhile, during the daily briefing by the scientific team Friday evening, Dr Marios Loizou, the Scientific Director, of the Nicosia directorate of state health service operator Okypy, brought up an emerging issue related to the damage from not only the pandemic itself, but also lockdown isolation, and the economic cost.

He said Cyprus had received two “major interventions”, one from the UN and one from the World Health Organisation (WHO) warning of the need for action on mental health. “There has been a significant increase in the symptoms of anxiety and depression in many countries. First-line health workers, women, children, adolescents, the elderly and people with pre-existing mental health problems belong to the high-risk groups. At the same time, there has been an increase in alcohol consumption, which is also a concern,” he said. “The effects of isolation, the change of daily life, the financial consequences, the anxiety for loved ones have greatly affected people’s mental health. The main psychological effects, as I mentioned above, are the increase in stress and depression rates.”

Loizou went on to say the WHO had warned “there is a possibility that this virus will never leave our lives”.  “With the data so far, we will be fighting the SARS-CoV-2 virus for quite some time. It is therefore important to have control over the situation, at least in terms of our own behaviours,” Loizou said.

Coronavirus: US working with other countries on vaccine-Trump