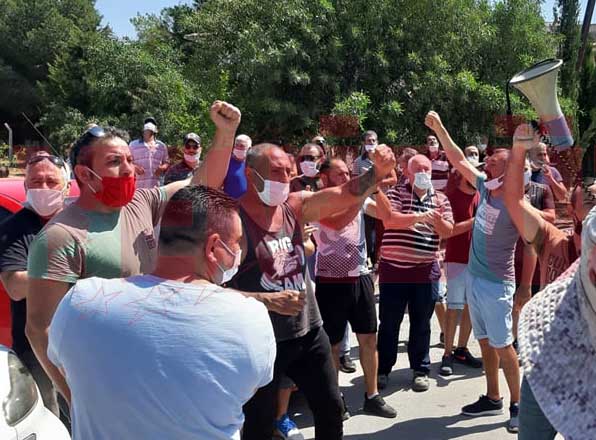 Scores of Turkish Cypriots living in the north but who work in the south part of the island, gathered on Friday morning at the Ayios Dhometios crossing calling on the government to be allowed to get to their workplaces.

The protest took place on the north side of the crossing.

The workers shouted slogans such as “We want to get back to work”.

A representative of the protesters, Bulat Ergin, said that this situation affected around 6,000 people altogether when the families of the workers were accounted for.

Ergin criticised the Turkish Cypriot authorities for deciding to suddenly impose the quarantine measure without giving them time to prepare, go pick up their salaries.

He also said that the 1,200 Turkish Lira (€160) the ‘government’ said would give to those of them who are married and the 900 TL (€120) to those who are single as monthly allowance was not enough and that they’d rather get back to work.

In a statement, the workers called on the Republic of Cyprus to let them get to their workplaces.

“The statements that the crossings are open do not reflect reality, and it does not mean we can get to our workplaces,” they said.

They were referring to statements last week by the government spokesman that the Greek Cypriot side has not closed all crossing like the Turkish Cyppriots did but rather suspended the operation of four and left other five open.

“Take other measures to allow crossings,” the group said, which is consisted of more than 1,500 people.

They pointed out that for a month now, there have been no positive coronavirus cases in the north. They added that currently entry to the north from abroad is banned and in the exceptional cases people are let in, they must be quarantined for 14 days and have to be in self isolation for seven more.

“You can test us at the crossings. It must not be difficult to carry out 1,500 to 2,000 tests,” they said, also offering to pay for the tests if necessary.

The group said their employers said they would back them on this issue. “Those who test negative could go back to work without being quarantines,” they said.

They also said that many among them if allowed to cross, are willing to remain in the government-controlled areas until the restrictions at crossings are lifted so that they could be able to daily go to work.

The group also said that they could lose their jobs while their employers would lose trained staff with which they have been working for years.

So far, none of the two sides has directly provided a solution to these workers’ problem.

The government had said they were willing to discuss this with the health ministry if these workers overcome obstacles over the crossings with the Turkish Cypriot side.

Peo trade union expressed their solidarity with the Turkish Cypriot workers and called for actions that would solve the problem.

‘Priority is to support Cypriot athletes on new Road to Tokyo’