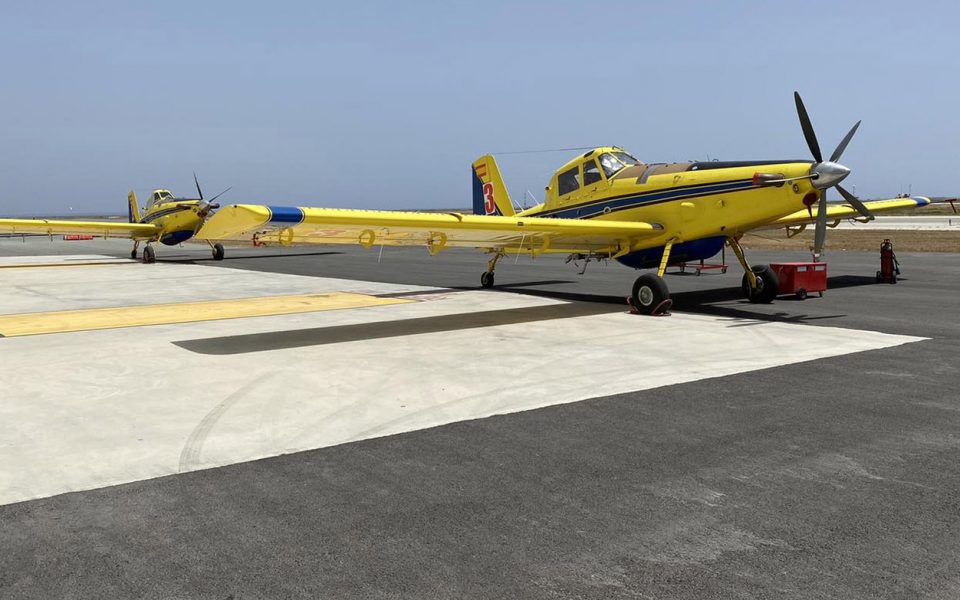 Cyprus on Monday received two additional aircraft as the risk of forest fires has spiked due to abnormally high temperatures, which are expected to continue for the rest of this week.

Forestry department director Charalambos Alexandrou told CNA that these are in addition to the two Russian Kamov helicopters leased by the Republic which arrived last week with their crews under a special arrangement as the island’s airports are still closed due to the coronavirus lockdown.

The two US air tractors, according to Alexandrou, arrived in Larnaca around noon.
“This type of aircraft has the capacity to carry three tonnes of firefighting equipment and has two crew members, a pilot and an observer,” he said. The aircraft can be filled with water or foam very quickly, he added.

Alexandrou said the two aircraft would be stationed at Larnaca airport until the end of May and then be transported to Akrotiri in Limassol. They can also be deployed from there to neighbouring countries that may need help The two Russian Kamov helicopters, which arrived last week will be based in Paphos.
He said that due to the situation with the coronavirus, all of the crews that came with the aircraft underwent testing “which were negative”. The crews of all four aircraft – in the Russian case there are 20 people who work in shifts – would be isolated close to the aircraft for duty shifts.

The two air tractors are being included in the European Rescue Mechanism, which allows the government to recoup, through EU funding, 75 per cent of the €1.68m cost of leasing them.

On Sunday six fires broke out across the island during a day of temperatures that reached a high of more than 42C. More fires broke out on Monday morning in Larnaca, one in a plot on Lefkara-Skarinou Street which destroyed dry grass was put out by residents with the help of a fire truck. The second broke out in a field in a residential area near Ayia Verginas high school. Three fire engines put out the blaze, the cause of which is being investigated by police.

At the same time on Monday, President Nicos Anastasiades was chairing a broad meeting of various bodies involved in firefighting such as the forestry department and civil defence. According to government spokesman Kyriacos Kousios protocols and plans for each of the relevant bodies were discussed.

“The president listened attentively to what was said by the relevant bodies and gave instructions for the immediate resolution of specific issues that were mentioned such as, for example, cleaning areas within the cities and strengthening firefighting forces,” Kousios said.

In statements earlier in the day, Agriculture Minister Costas Kadis said: “Starting tomorrow the crews and aircraft will be ready to be cast into the battle against the fires.”

The minister said the smallest carelessness could create major problems and called on the public to be careful following the sudden rise in temperatures last week, topping 42C. “We must all be aware” he said.

On Sunday, the first of the six fires across the island was reported in the morning near the Limassol-Nicosia highway in Kakorazia. The forest fire forced sections of the road to close for about four hours. Another two fires followed in Ayia Napa, one in the north, a smaller one in Paphos, and a sixth in Ypsonas, Limassol.

The president of the republic sent one helicopter and one small plane to assist the extinguishment of the fire in the north after a request by the Turkish Cypriot leader Mustafa Akinci. Turkey also sent three helicopters.

According to the met service, temperatures are expected to remain high in the coming days combined with low levels of humidity and the red alert for forest fires remains in force.

Temperatures to reach 43C on Tuesday