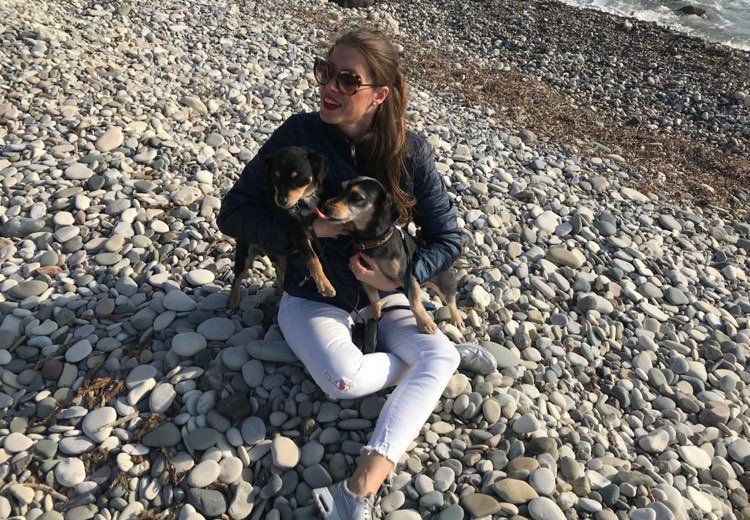 Pet owners get perks. Decreased levels of stress, an improved immune system, and lower cholesterol are all among the proven benefits of having an animal in the home. But during the coronavirus measures, owning a pet has any number of other advantages, not least the increased freedom of dog walking, the crazy companionship of a cat, or the steady routine that comes with taking care of a living creature! We ask three Cyprus residents how their much-loved pets have helped them through isolation.

Director of the Little Muse Theatre and dedicated animal lover, 40-something Catherine Beger has had pets as far back as she can remember. “When I was five, there was Nellie the Staffordshire Terrier, who’d accompany my father and me everywhere, even on summer hols in our VW van!”

Currently, Catherine and her 10-year-old daughter, Daisy, are the proud owners of Fishy the fish, Chestnut the hamster, and Nookie the dog – “no reference to anything dodgy in that name,” Catherine laughs. “It’s just that our two previous dogs were called Noodle and Lucky, so Nookie is an amalgam!”

A Cypriot poodle, Nookie was rescued from the streets of Larnaca, when Catherine found him roaming the town centre. “You know how it goes: we petted him a bit, and he followed us, and then he was there every day – so we just had to take him home.”

14 years on, and Nookie is a much-loved member of the family, and has been a huge comfort during the measures. “Of course he’s helped us get out of the house,” Catherine smiles. “And though he’s quite old and can’t go long distances, I just jog on the spot as he pootles along, and convince myself it’s good exercise. But where Nookie’s really been a huge help is with Daisy – she’s missed seeing her friends so much that she’s created a deeper place for him in her life: cuddling him and talking to him, and watching movies with him on the sofa.

“The other day,” Catherine reveals, “I jumped the gun on the government bulletin and assumed Daisy would be returning to school; she was dancing round the house with happiness! When I realised it was just the older kids, she was ever so upset. But she went and gave Nookie a great big hug and a cuddle, and I could see that really calmed her down.

“Having a pet,” Catherine adds, “is such a help during isolation. It’s unconditional love: dogs especially are so loyal; they give love and need love, and that provides you with a purpose – you need to feed them and exercise and stroke them. When you have a pet, you’re never alone.”

“I love animals so much I haven’t eaten one since I was 10!” says artist and writer Lara Benjamin. A self-confessed cat lady, Lara comes from a “feline family: my first pet was Mitsy the tabby, who slept in my crib each night. And I was always the child who’d rescue abandoned animals and bring them home to my exasperated parents.”

But when Lara and her husband George first moved in together, things changed. “He’d never had pets, so I just wasn’t sure. But for me, a house isn’t a home without an animal and, a year in, I managed to persuade him we should take in an abandoned kitten we’d found at a building site.” Named – appropriately – Skip, the kitten grew up to become “an absolute monster cat, just like a lynx!” laughs Lara. “And my husband’s love for him has turned into a full-on romance – now I’m just the third wheel in that relationship!”

Lily the Egyptian cat was a later addition: found starving and injured on the road through Tseri, she’s now over a year old but still “a scrawny, gangly little thing, a bit like a teenager who hasn’t grown into her looks yet. She’s quite young,” says Lara, “so she’s very mischievous, climbing all over everything or just sitting in her box in the kitchen for hours on end, posing!

“I think that’s where having pets has been such a help during the measures,” Lara continues. “Cats are just hours of entertainment – they’re all completely eccentric with very individual characters. One of the first things we realised during the stay-at-home period was how much joy we found in our cats. It’s something I’ve been talking about with all of my friends – how much it’s meant to them to have pets during isolation; the love and the joy they bring.

“Of course, when Lily’s rolling round on my yoga mat, attacking my feet during online classes, it’s certainly an increased challenge for the concentration! But then when I’m working at my desk, she comes and cuddles up on my lap. There is no sound in the world more calming than a purring cat, and she’s just a huge comfort.”

“Ever since I was born we had dogs in the house,” says Laura Ker-Lindsay. “Chewie the chow chow used to sleep outside my bedroom door every night, and follow me up and down the garden path when I rode my tricycle! But my first dog of my own has been Louie, a mongrel – probably an American Pinscher terrier cross.”

Found on the streets of Nicosia, nine-year-old Louie was an instant hit with the then 27-year-old Laura. “He wandered into my brother’s garden, and my nephew kept asking ‘Aunty Laura, will you keep him?’ So I did! I took him to the vet and found he had no chip, so off we went to the doggie spa. And when they cut off all his raggedy hair he just looked so cute and so lost that I fell in love. I’m still not sure what breed he is, but it doesn’t matter: he’s captured my heart!”

Three years ago, when Laura realised she was working full time and Louie needed a little company, Oscar came along. “I was looking for a puppy who looked just like Louie, and I came across baby Oscar at the Nicosia Dog Shelter. His mother had just given birth, and he was the ugliest in the litter. But when he came straight over and sat on my feet I said ‘that’s it! We’re taking him!’ Louie,” she adds, “was NOT impressed by this addition to the family! But now they’re inseparable.”

Although Laura lives in Nicosia, when the measures began, she and her partner moved straight down to their house on the beach. “We knew it would give both us and the doggies more freedom,” she explains. “And being able to take them out for a walk by the sea has been such a freeing experience when you’re feeling trapped and isolated.

“My dogs cheer me up on a daily basis,” she smiles. “When I feel sad they both come and sit on my lap of their own accord – they sense when I’m down and do their best to cheer me up. Sometimes they just lie on the middle of the floor with all four paws in the air and it makes me laugh. And watching them play in the garden and on the beach – it makes you realise how simple life really is, how the simple things are all we really need to make us smile, no matter what life throws at us.”

So how many dish towels do you need? by Hestia Home