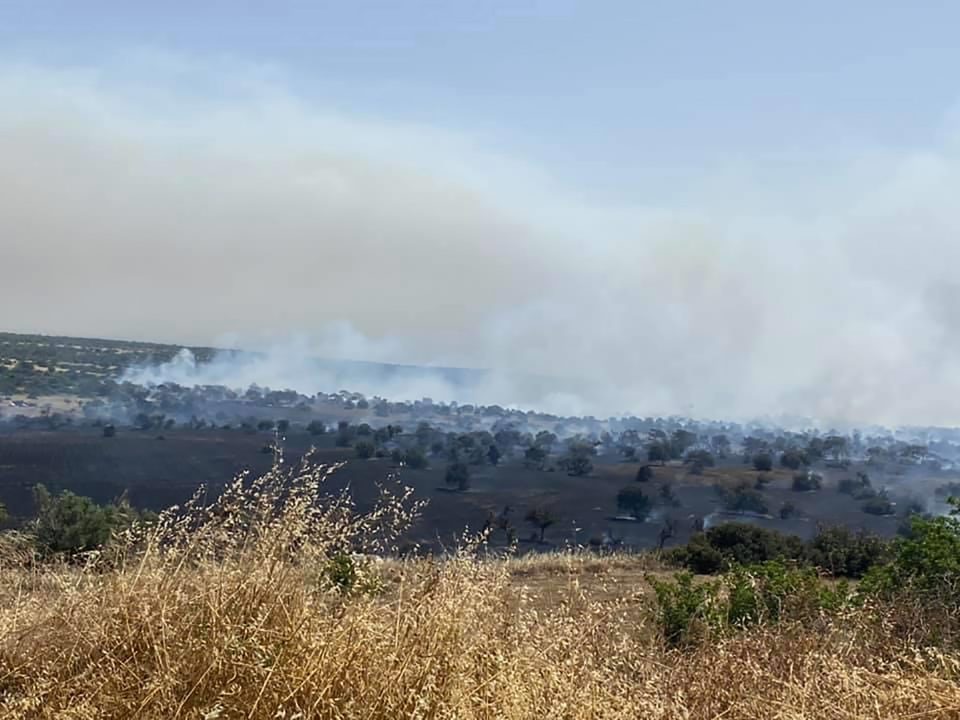 One of the leaders of the Maronite community living in Kormakitis in the north called on the Republic on Monday to help farmers who lost their crops and trees during Sunday’s wildfires.

Kormakitis was one of the villages in the north to have been badly affected by the fire that burned around 5,000 hectares of farm and forest land, including centuries-old olive trees.

“The extend of destruction is unbelievable,” he said.

He added that the fields were full of crops ready to be harvested so it was easy for the fire to spread.

According to Koumettou, fields full of wheat, orchards, carob and ancient olive trees were burned.

“People lost their properties, they saw the trees they inherited from their parents and grandparents destroyed,” he said.

The level of destruction was such that if one stands outside Kormakitis can now see straight to the sea.

“Such is the level of devastation,” he said.

He added that both the around 56 people who remained in Kormakitis since 1974 and the 150 people who resettled in the village recently including young families with children, saw within a few hours their labour gone.

Most residents were crop producers and animal farmers.

Koumettou said after restrictions in crossing between the two sides were imposed in March, several of them who got stuck in the government-controlled areas could not go to the village and harvest their crops and had to pay others do it.

“They had a lot of expenses to hire people to harvest, and now the fire added to their problems,” he said.

Koumettou expressed hope that as soon the assessment of the damage starts within the coming days, the state will help them, because this will be the final blow for many.

Authorities in the north said on Monday that the fire in Kormakitis started from the roadside and probably caused by cigarette butts while another one between Diorios and Kapouti that are very close to Kormakitis, is believed to have started from an electric cable or transformer. The second fire started within the military area in Diorios, it was reported in Turkish Cypriot media.

President Nicos Anastasiades responded positively to a request by the Turkish Cypriot side on Sunday for help to tackle the fire by sending in an aircraft from the forestry department and one helicopter. Three firefighting helicopters also arrived from Turkey.

Some Turkish Cypriot dailies on Monday reported that it was the first time since 1974, that such assistance was requested from the south.

Turkish Cypriot leader Mustafa Akinci said that the help was requested following a consensus reached with the ‘cabinet’ and that his office had initiated the necessary contact with the Greek Cypriot authorities.

The destruction of many ancient olive trees located in Kapouti was among the main issues discussed on social media and the press in the north. The area, which is called ‘Monumental Olive Trees Centre,’ is recognised by the EU as a heritage monument.

Reportedly, 90 per cent of the around 2,000 olive trees, the oldest ones being 800 years old, were destroyed by Sunday’s fire.

One of the oldest trees there, the Queen, did not burn but another one around the same age, the King, was destroyed, reports in social media and in the press said.