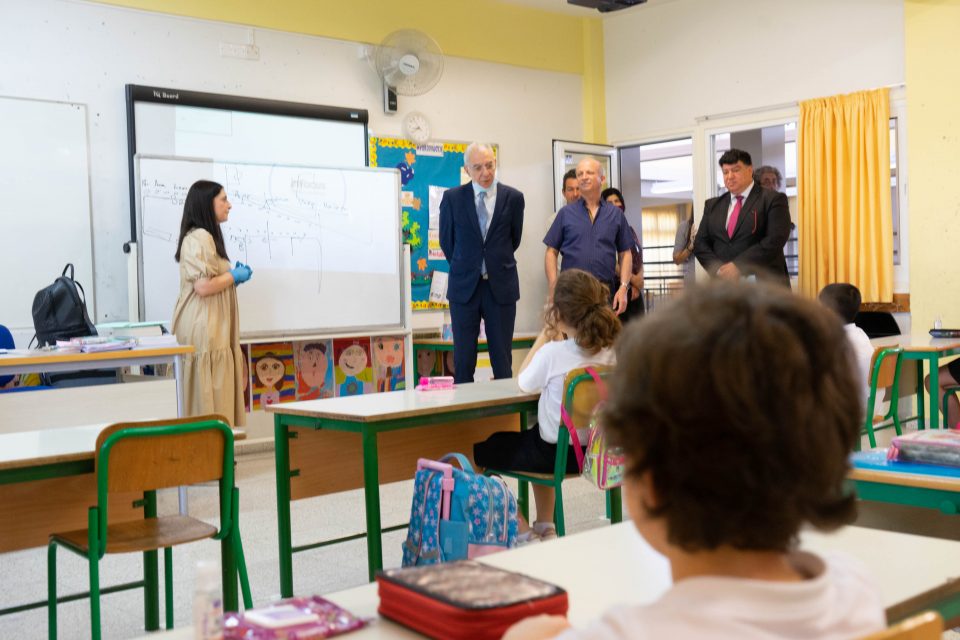 Prodromou visiting a school in Engomi on Thursday

Rafaella sneezed into her elbow during the school break. Her friends tried to remain calm but took a timid step back. A masked journalist jokingly walked further away from her. The eight-year-old girl laughed it off but defended herself by saying that she had covered her mouth.

“Hey, she is not keeping social distancing,” yelled a young boy, pointing at another classmate.

Children in primary school and gymnasium returned to school on Thursday.

“We found out that children did return to schools and only a few of them are missing,” Education Minister Prodromos Prodromou said.

Wearing a mask on his chin, the minister along with his team – who were not wearing masks – toured kids’ classrooms on Thursday to brief them on health regulations.

“I was hoping my children would be in the second group and go to school next week. In case something happened, I didn’t want to risk the health of my kids,” Victoria Dimioti, who dropped off her two primary school children, said.

Teachers doubled their patrols in the yard during breaks to check that kids abide by the restrictive measures, Stylianou said. According to the assistant principle, a cleaner and a teacher sacrifice their break to stand at the toilets and check everyone respects health regulations.

The teachers’ lounge was transferred into the hall. “It’s inconvenient, but we couldn’t fit in the previous lounge,” a teacher said.

Despite those changes, children seemed to enjoy being back with their friends.

“Are you happy that you returned back to school?” the minister asked a class of five seven-year-olds. They all nodded. Many students were wearing masks inside the classroom and had antibacterial gels ready to use on their desks.

In primary schools some lessons have been adjusted according to the restrictive measures while some have been cancelled completely. Art is expected to take place when children bring their own material, while PE lessons are currently postponed.

“We are doing different things, a special lesson,” the art teacher told the minister.

Physical education instructor at Engomi gymnasium secondary school Nicos Karapanos told the Cyprus Mail that even though his lessons were cancelled, he came to school to assist with checks.

It is difficult for teenagers not to get carried away when talking with friends. Hence, they might forget to keep social distancing at breaks, despite attempts to assign separate break areas for different groups, he said.

“Children might be older, but they need support and reminding of the measures,” he added.

“A big part of school is socialising, which is now lost, so what’s the point?” a mother who didn’t send her daughter on Thursday said.

However, for students in gymnasium and lyceum if they do not go to school absences will be counted for children not belonging to or living with someone in a vulnerable group.

Parents of children with special needs reacted when they were instructed to avoid taking them to school at this stage. They are waiting for a ministry committee to assess all cases separately and issue specific instructions.

Special needs schools will not open at this stage following experts’ instructions.

“It is a matter of a few days to examine those cases,” the minister said.

Political parties accused the ministry of a lack of organisation and discrimination towards those children.

“Next year we will be more prepared,” Prodromou said.

‘Matches without fans sadder than dancing with your sister’

Pournara staff doing all they can to contain scabies outbreak, minister says