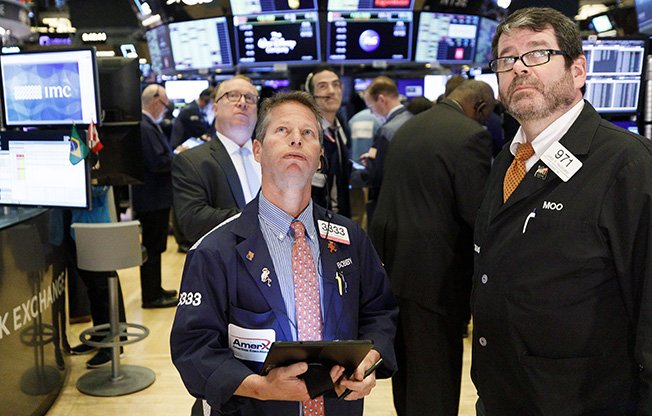 Traders on the floor of the New York Stock Exchange. Most analysts are finding it terribly difficult to make any concrete recommendations for stock picks

Stock markets around the globe have, for the past few months, been stuck in a kind of boom-or-bust reactivity to every event.

At the beginning of March, the S&P 500 was just above 3,000; by the first of April, it was down to about 2,500 and by May 1 the index was back up to about 3,000 again. Dow Jones Eurostoxx 50 plunged from nearly 4,000 at the end of February to about 2,500 in mid-March, and has been range-bound since then. Japan’s Nikkei has done a similar whipsaw between the end of February and May.

“We need to see bad data getting less bad,” complained stock market analyst Barry Bannister of Stifel. One day there are announcements of shocking jumps in unemployment numbers, and the next day the price of oil plunges again.

For each announcement of a potential vaccine for the novel coronavirus, there is a corresponding jump in stock prices, which then fall again when some experts downplayed or contradicted these medical advances.

“The truth is that no-one knows what is going to happen next,’ remarks stock market analyst Russ Mould of AJ Bell. ‘The markets have swung from utter despair to greed very quickly, when perhaps the real state of affairs lies somewhere between the two.”

Analysts have begun talking about ‘FOMO’ rallies – ‘fear of missing out.’
With so many challenges to the economy, it’s hard to explain otherwise the way investors rush in where angels fear to tread.

Goldman Sachs chief US equity strategist, David Kostin, wrote in a report that another boom-or-bust reaction will soon take over and send the S&P 500 Index down almost 20 per cent in the next three months.

“A single catalyst may not spark a pullback, but a number of concerns and risks exist that we believe, and our client discussions confirm, investors are downplaying,” Kostin writes in the report. He says the S&P 500 will probably drop to 2,400 over the next three months before it rebounds to 3,000 by year end.

In Europe, a slew of disappointing corporate earnings may put an end to ‘FOMO’ stock market bets.

The emergence from lockdown in May will come too late to affect most corporate results announcements in Europe. Sales have slowed to glacial point, and deal-making has been on hold.

Companies listed on the pan-European STOXX 600 are now expected to report a decline of 48.4 per cent in second-quarter earnings, down from a drop of 46.7 per cent forecast the week before, according to data from Refinitiv.

And analysts expect a further 35 per cent drop in earnings in the third quarter – although scenarios for a restart and recovery vary.

Most analysts now predict an upsurge only in the first two months of 2021. Although stock markets usually lead the economy by about six months, no one expects such an early resurge in the current climate.

Most analysts are finding it terribly difficult to make any concrete recommendations for stock picks, but Baillie Gifford partner Tom Slater takes a stab at it: “We haven’t, as a society, shut down the economy voluntarily before”, he points out.

“Instead of trying to predict the path from here, we focus much more on whether we’re investing in companies that are flexible, that are resilient, and that can be robust in the circumstances being thrown at them.”