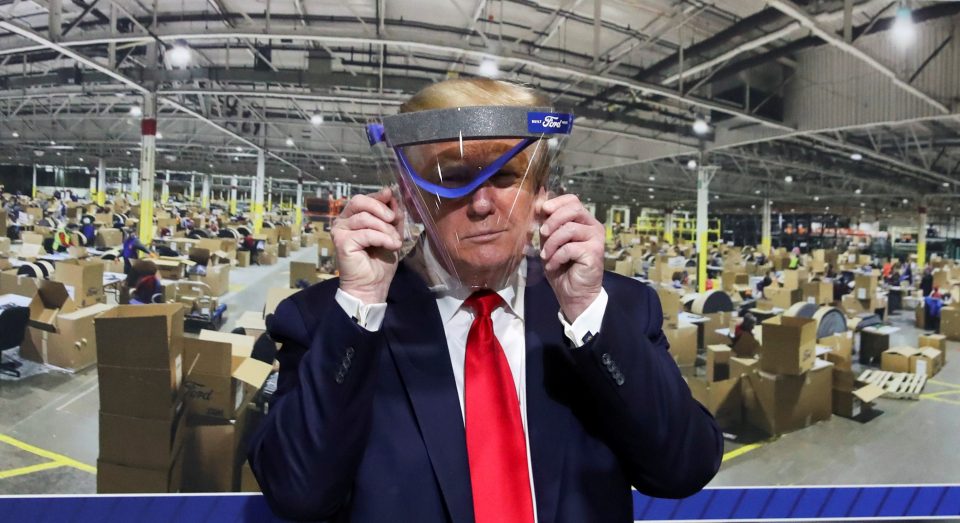 U.S. President Donald Trump holds up a protective face shield during the tour of the Ford Rawsonville Components Plant that is manufacturing ventilators, masks and other medical supplies

President Donald Trump traveled on Thursday to the crucial U.S. election battleground state of Michigan to visit a Ford Motor Co plant amid tensions with its Democratic governor during the coronavirus pandemic, opting not to wear a protective face mask for the cameras.

Trump toured the Ford plant, which has been recast to produce ventilators and personal protective equipment, and held a roundtable discussion with African-American leaders concerning vulnerable populations hit by the virus.

Trump, who has said he is taking a drug not proven effective for the coronavirus after two White House staffers tested positive in recent weeks, did not wear a mask during any of his public events at the plant in the city of Ypsilanti even though Ford on Tuesday reiterated its policy that all visitors must wear them.

Trump has consistently disregarded guidance from the U.S. Centers for Disease Control and Prevention urging people to wear masks in close company to try to curb the spread of the virus.

Surrounded by Ford executives wearing masks, Trump told reporters he had put one on out of the view of cameras.

“I had one on before. I wore one in the back area. I didn’t want to give the press the pleasure of seeing it,” Trump said.

When asked if Trump was told it was acceptable not to wear a mask in the plant, Ford Executive Chairman Bill Ford said, “It’s up to him.”

Here is a quote from Trump:

“Honestly I think I look better in a mask,” Trump added jokingly.

The company later said in a statement that the chairman had “encouraged” Trump to wear a mask when he arrived, adding that the President had obliged during a private viewing of three two-seater Ford GT sports cars but then removed the face covering for the rest of the visit.

Trump, a Republican seeking re-election on Nov. 3, has urged states to loosen coronavirus-related restrictions so the battered U.S. economy can recover even as public health experts warn that premature relaxation of restrictions could lead to a second wave of infections.

Michigan Governor Gretchen Whitmer, seen as a potential vice presidential running mate for presumptive Democratic presidential nominee Joe Biden, is facing a backlash from some critics against her stay-at-home orders in a state hit hard by the last recession. Trump has encouraged anti-lockdown protests against Whitmer held in Michigan’s capital.

Whitmer, whose state has been hit by devastating floods, on Thursday moved to further reopen Michigan’s economy through a series of executive orders.

Trump on Wednesday threatened to withhold federal funding from Michigan over its plan for expanded mail-in voting, saying without offering evidence that the practice could lead to voter fraud – though he later appeared to back off the threat.

At the plant, Trump repeated his assertion. “Voting by mail is wrought with fraud and abuse.” Democrats have accused Republicans of pursuing voter suppression policies aimed at voters who tend to back Democrats.

Trump on Thursday pledged federal support to help with the “very bad” dam breaks in Michigan. Rising floodwaters have displaced thousands of residents near the city of Midland.

Whitmer spoke with Trump on Wednesday.

“I made the case that, you know, we all have to be on the same page here. We’ve got to stop demonizing one another and really focus on the fact that the common enemy is the virus. And now it’s a natural disaster,” Whitmer told CBS News, describing her conversation with Trump.

Whitmer added, “Threatening to take money away from a state that is hurting as bad as we are right now is just scary, and I think something that is unacceptable.”

During the roundtable discussion, Trump said he expected the CDC to put out guidance on reopening places of worship as soon as Thursday. Trump, whose conservative political base includes evangelical Christian voters, spoke on the need to reopen churches, which like other parts of society have been affected by social distancing policies during the pandemic.

Trump won in Michigan in the 2016 election, the first Republican to do since 1988.

Could it be that the key to world peace can be unlocked by animals?