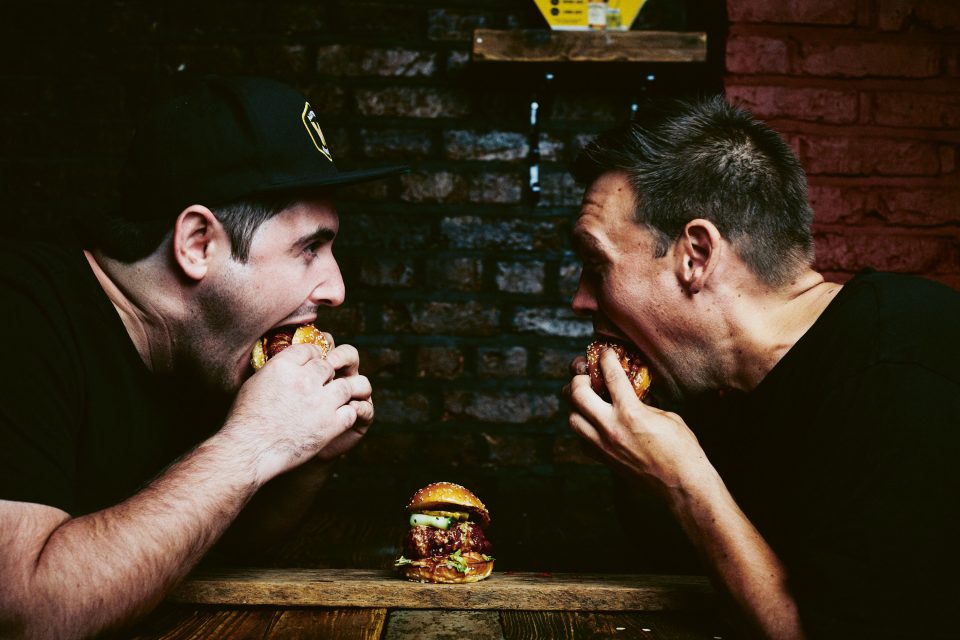 David and Ben, co-owners of Wingmans and authors of Wings and Things by David Turofsky and Ben Ford (Quadrille, hardback & ebook). Dan Jones/PA.

There’s something immensely tactile about eating chicken wings. The deep orange of Buffalo sauce streaking your forearms, nubbly, crispy bits of fried coating to nibble off, a stack of stripped wings piling ever higher in a basket in front of you.

They’ve known each other since they were kids growing up in north London, but started working together after Turofsky returned from a year ostensibly studying in America. In fact, says Ford with a laugh, “he came back with this fiendish appetite for chicken wings.” “And buffalo sauce, generally,” adds Turofsky, proudly.

While admittedly “a chicken concept” in their new book the mates are determined to cater to all tastes and lifestyles, whether you’re vegan or gluten-free, halal or veggie (take their Shanghai cauliflower, or tempura oyster mushrooms).

The key to great wings, they argue, is to follow in the great American tradition and toss them in sauce.

If you’re more used to ordering a bucket of wings than snipping wing-tips, marinating and deep-frying your own at home though, Turofsky’s top tip is to “cook with love!”

Sauce and combo wise, Turofsky says “don’t be afraid to experiment” either.

In a large bowl combine the wings with the dry spices and let marinate in the fridge for at least one hour or up to four hours – keep chilled until ready to cook.

Preheat the oven to 180C. In a small saucepan bring 150ml water to the boil with the sugar. Add the honey, zest of two lemons and the ginger to the syrup. Allow to reduce slightly until the syrup takes on both flavours. Sieve the syrup into a clean container.

Soften the shallots in a small pan with the butter. Pour the syrup onto the softened shallots and mix together. Line up the wings on a wire rack over a baking sheet and bake for 15 minutes.

After 15 minutes, brush the wings with the glaze and continue to cook, applying fresh glaze every five minutes for a further 15 minutes. Reserve some glaze to serve.

Put the wings in a bowl and toss with a little reserved glaze ensuring they are fully coated.

Arrange in a serving dish and garnish with the remaining lemon zest and five to 10 twists of black pepper.

2 or 3l vegetable or rapeseed oil, for cooking

A few sprigs of fresh coriander or cress

In a large bowl combine the wings with the dry spices and the buttermilk. Let marinate in the fridge for at least one hour or up to four hours. Combine the two flours and set aside. Drain the wings from the excess marinade and toss through the flour – keep chilled until ready to cook.

Preheat a deep fryer to 180°C. Place the wings in the basket and lower slowly into the fryer.

Cook for seven or eight minutes ensuring they hit 75°C at the core of the thickest part of the wing and the juices run clear. If they don’t hit 75°C after the first eight minutes just carry on cooking for a further minute.

Heat some oil for the garnish in a wok and fry the chillies, spring onions, green pepper and curry leaves for a couple of minutes until crispy.

Pile the wings high on a plate, dust with the Szechuan seasoning and garnish with the fried chillies, spring onions, green pepper and curry leaves. Top with the coriander.

Classic colognes: 6 men’s fragrances that have stood the test of time

The good guys: how men can be allies to women at work

Try these fun activities at home to kill boredom

Check you out: How to wear heritage patterns this season