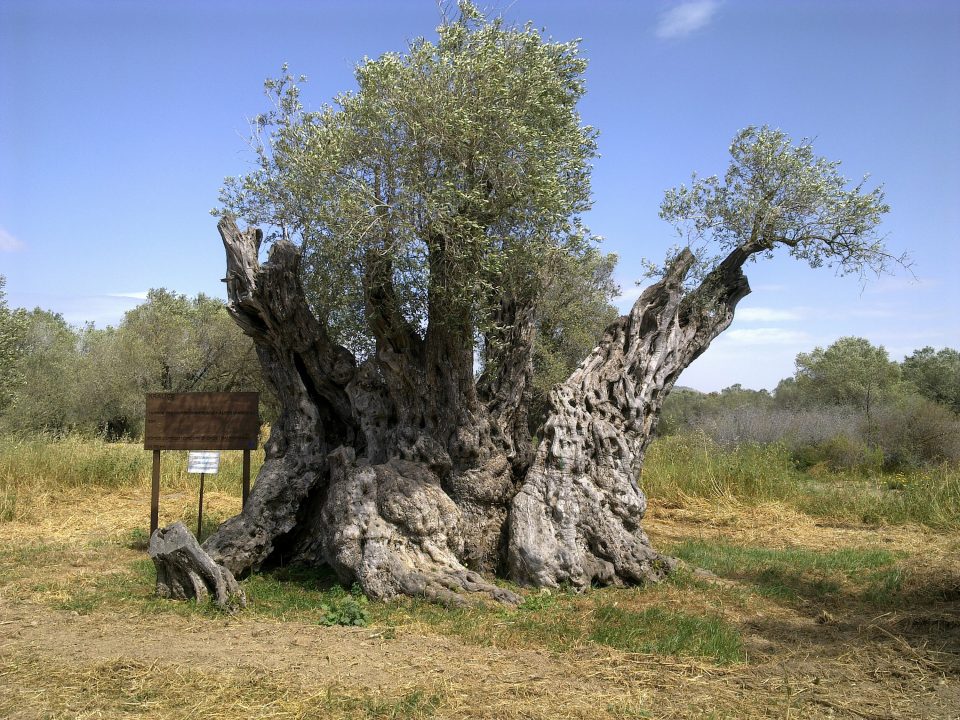 The King before it was destroyed in the fire

Cypriots on both sides of the divide remain shocked and dismayed at the devastation to the ancient Dematona olive grove caused by last week’s fire that burnt over 5,000 hectares of forest land and farms in the north, reducing some of what had been among the island’s oldest olive trees to nothing more than a ghostly pile of ashes.

The unique grove, located in the vicinity of the village of Kapouti [Kalkanli], long declared one of the natural treasures of the island, is regarded as one of the north’s most important cultural heritage sites.

The grove lies within the Ayia Irini [Akdeniz] area designated by the Turkish Cypriot authorities as one of six Special Environmental Protection Areas (SEPA) as well as the potential Natura 2000 sites.

Of the estimated 2,000-plus olive trees growing in the valley, some 400 are over 500 years old, among them, the gnarled ancients estimated to have stood their ground here for 800 years and more. One of them, the King, was destroyed.  It was about 16 metres in diameter and was the second largest olive tree in the grove dating back to the 12th century

“These trees were planted in the valley during the Frankish times in orderly lines and because of this the area was called also Ordino. The name Dematona came much later,” the well-known archaeologist and writer Anna Marangou tells the Sunday Mail.

“Unfortunately there is practically nothing written about the place in the materials available in Cyprus. But I am sure, it must be mentioned in some archives in Venice. It was a large estate and there were two churches located next to it, of which only piles of stones are left.”

She notes that the name Dematona which came into use among the local population was linked with a belief that the grove was created during the Frankish era in honour of the Virgin Mary (hence Dematona from Madonna). However, frustratingly, it has not been possible to verify since as there are no written references to any church or chapel dedicated to the Virgin Mary in this location.

For hundreds of years, the olive trees of the Dematona valley have been owned by the inhabitants of Kapouti on an individual and family basis.

“The place was a paradise,” according to the folk music expert and singer Michalis Terlikkas, who was born in the village in 1955.

“Back before 1974, when you were there you could not see the sky. These old trees were not pruned the same way as today. They would create a kind of a canopy over our heads,” he remembers.

Describing a visit he made in 2009 with his father to the Dematona olive grove, since renamed  the Ancient Olive Trees Monument Park, Costas recalls how his father identified the two 500-year-old trees he used play around as a child as well as the nearby cave where he would shelter when it rained. Melis, Costas writes, would proclaim without hint of exaggeration that this was “paradise on earth”.

A saddened Michalis Terlikkas speaks of the sense of helpless desolation he and his fellow villagers have felt since news of the fire. It is doubly painful because, in the current restrictions of pandemics and closed crossings, they had been unable to travel to the valley to see for themselves just what had happened to their beloved trees.

“To give you an idea of just how devastated I was, on the same day as the fire, that very morning, two of my carob trees, trees I myself planted 25 years ago right in front of my house, fell and I was very upset. It was only when I called one of my brothers to tell him about the damage that I heard about Dematona… And believe me the Dematona news made me much more upset than the demise of the two trees I had planted myself,” he says.

Speaking from Shia, the village between Nicosia and Limassol, where he currently lives, Terlikkas falters for a moment before confiding “the pain is just indescribable.”

Like many other Kapoutians, the singer’s family owned land, trees and rights to water usage in the valley. In Melis Constantinou’s case, the family inheritance there consisted of four olive trees.

Terlikkas recalls how, when the crossings first opened in 2003, he immediately drove to the village and then went to Dematona to check out the situation there.

“It wasn’t good. The trees were very dry and not well cared for. The water from the valley’s natural spring, one of the very few that hadn’t dried out in the north, was not being used for watering [the trees]…nor was the big water pool built in 1952 for watering the valley being used.

“We went to the current residents of Kapouti, Turkish Cypriots from Arodes in Paphos, and talked to them about it. When we came back after 20 days, the situation improved and the pool was full of water,” he remembers.

Cengiz Serin, one of the Turkish Cypriots in Kapouti, is the president of the Kalkanli Ancient Olive Trees Monument Association, the organisation established in the mid-1990s to take care of the trees. After Cyprus joined the EU in 2004 and funding became available for projects in the north, the association applied for EU help to take better care of the site. As a result, the grove’s watering system was upgraded with new pipes and the grove itself was fenced off. Information boards about the grove and the trees were put in place along with discrete wooden benches where visitors could sit and contemplate their surroundings. Like royalty, the ancient olive trees began to receive a steady stream of admiring tourists.

Serin, who arrived in Kapouti at age eight, currently is an owner of 50 trees in the valley. These were given to him by the Turkish Cypriot authorities, calculated on the basis of the number of trees his family had left behind when they moved from the south. He also takes care of 100 other trees, currently ownerless.

He tells the Sunday Mail that last Sunday, when the fire broke out, one-third of his trees were burnt, including two that were over 300 years old. All told, he estimates that for the grove as a whole, about 50 per cent of the trees have been lost.

“In the case of the oldest trees, of the nine that were given names because of their special age and locations, we have lost seven. Only the Queen and Aphrodite have survived. Out of the 400 oldest trees, we think we’ve lost 60 per cent.”

That’s an estimate, because “we have not done a proper count yet”.

Serin is hopeful that many of the trees, the younger ones especially, will flourish again. Unfortunately, he doesn’t think the same will apply to the elders.

“We will do our best and fight for all of them. We have already started a campaign to get the financial support needed to create a better watering system and better protection against fire. We have talked to the people from the EU already and they have promised us some help,” he says.

Terlikkas also holds out hopes that many trees will flourish again noting their phoenix-like capacity to come back.

“There are trees in Dematona that were already reborn after fires. They will do it again.”