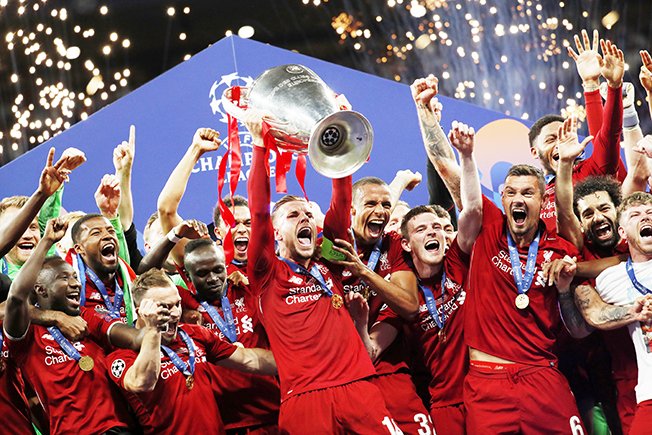 Jordan Henderson lifts the Champions League trophy last season. The Liverpool captain says that lifting the Premier League trophy without fans there to see it would be a "pretty strange" experience

Lifting the Premier League trophy without fans there to see it would be a “pretty strange” experience, Liverpool’s Jordan Henderson has said.

Liverpool need just six points from their remaining nine games to win the league for the first time in 30 years but there is still no clear date on when the season will resume after it was suspended in March due to the Covid-19 pandemic.

Fans will not be allowed to attend games in line with the government’s protocols for the return of elite sport.

“Of course it would feel different because if you win any trophy and receive it without any fans there, it would be pretty strange,” club captain Henderson told BBC Radio.

“It’s still not over, we still have work to do. We want to finish as strongly as we can to make sure it is a full season.

“After that, whether we win it or whatever, then receiving the trophy and the fans not being there… you just have to deal with it when it comes.”

Henderson has also spoken of his pride at how Premier League footballers have come together to contribute towards the NHS during the coronavirus pandemic.

As the country dealt with the awful situation presented by the global health crisis, top-flight footballers came in for criticism which intensified last month when Health Secretary Matt Hancock called on players to do more.

By then news was starting to filter out about a joint fund that Premier League captains were working on and Henderson has been widely credited with leading the #PlayersTogether scheme that was announced on April 8.

The initiative is directing funds to the NHS Charities Together group for distribution to good causes working to provide support to NHS staff and patients.

Speaking for the first time about the venture, Henderson told BBC Radio 5 Live: “We wanted to make sure it was the right thing we were doing and we wanted to do it properly.

“It did take a bit of time but ultimately we’ve come together and done an amazing thing and raised a lot of money for charities that need it and support the people who need it, which has been massive for them.

“It’s been a real positive thing during this lockdown that we’ve all come together to try to help as best we can in this awful time.

“It was a real collective effort and everybody wanted to do something – and to do it together made it just even more powerful and helped the people that needed it the most in terms of the NHS key workers and volunteers as well.

“We made sure the funds were going in the right place, which we were more than happy with.”