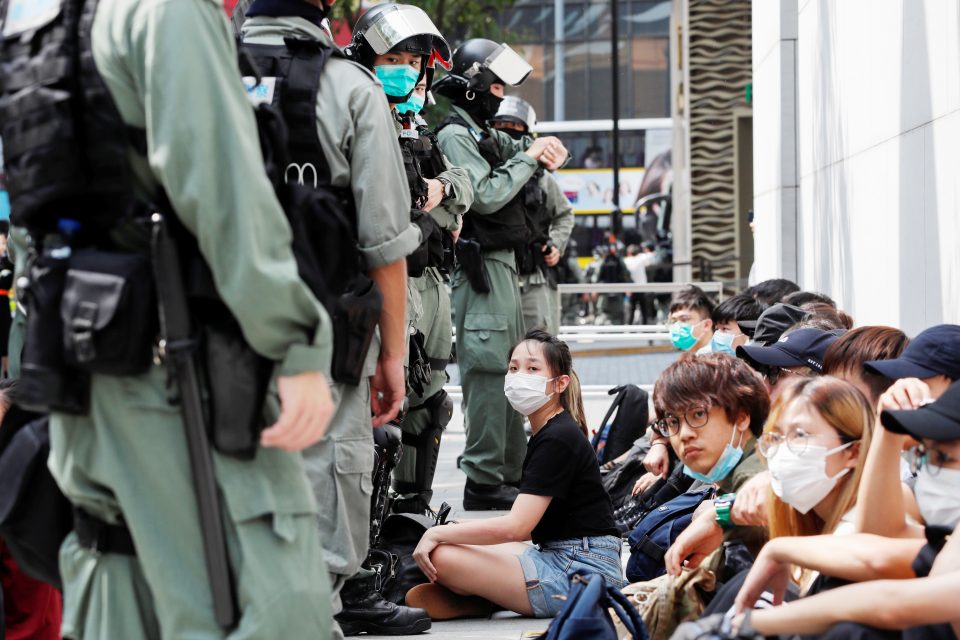 Anti-government demonstrators are detained by riot police during a protest at Causeway Bay as a second reading of a controversial national anthem law takes place in Hong Kong, China May 27

Taiwan promised on Thursday to settle Hong Kongers who flee the Chinese-ruled city for political reasons, offering help from employment to counselling, and prompting angry condemnation from Beijing as it pushes security legislation for Hong Kong.

Taiwan President Tsai Ing-wen this week became the first world leader to pledge specific measures to help people from Hong Kong who may leave the former British colony because of the new legislation.

Chen Ming-tong, head of Taiwan’s top China-policy maker, the Mainland Affairs Council, told parliament the government will establish an organisation to deliver “humanitarian relief” that includes settlement and employment in a joint effort with activists groups.

He said counselling services will also be available for Hong Kongers, some of whom may take part in increasingly violent pro-democracy protests in Hong Kong.

“Many Hong Kongers want to come to Taiwan. Our goal is to give them settlement and care,” Chen said, urging the public not use the word refugee as it could be “emotionally harmful” for people from the city.

Chen did not give details, such as scale and timing of the relief when pressed by lawmakers, saying the government is still working on the programme.

Hong Kong’s demonstrators have won widespread sympathy in democratic Taiwan, which China considers as its territory to be taken by force, if necessary. Taiwan has shown no interest in being ruled by autocratic China.

Help for Hong Kong has won rare bipartisan support in politically polarised Taiwan and three opposition parties have introduced bills to make it easier for Hong Kongers to live in Taiwan if they have to leave the city due to political reasons.

Taiwan has no law on refugees that could be applied to protesters seeking asylum, but its laws promise to help Hong Kongers whose safety and liberty are threatened for political reasons.

Some say Tsai’s government is not moving fast enough.

“Please come up with details of the humanitarian relief at the soonest. Don’t wait until people shed blood like water,” Chen Yu-jen, a lawmaker from main opposition Kuomintang party, said.

Ivan Tang, a Hong Kong pro-democracy activist, welcomed Tsai’s support and said there was a sense of urgency among protesters in the city, some of whom had been barred from entering Taiwan because of travel restrictions to contain the coronavirus pandemic.

Taiwan has become a popular destination for Hong Kongers leaving the city, with the number of Hong Kong citizens granted Taiwan residency jumping 150% to 2,383 in the first four months of 2020 compared with a year ago, official data shows.

University applications to Taiwan from Hong Kong also rose 62% in 2020 from a year ago. The island’s education ministry said this week it was planning to raise the quota for Hong Kong students.