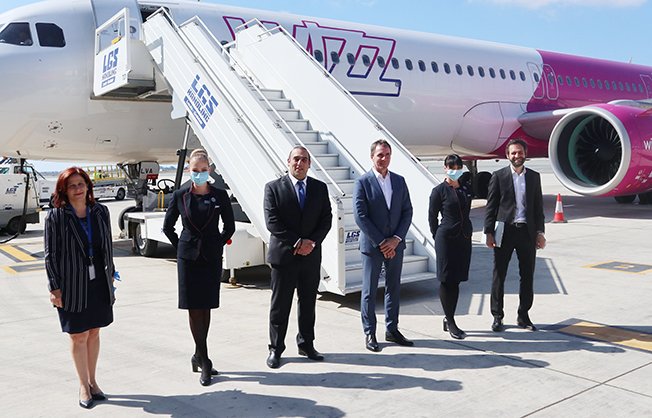 Along with the establishment of the new base, Wizz Air announced 11 new services to seven countries from Larnaca starting from July 2020. Seats on the new routes can already be booked on wizzair.com or on the airline’s app from as low as EUR 24.99

WIZZ Air is now Europe’s largest airline in terms of seat supply, according to industry data provider OAG, so it is a signal mark of confidence that the Hungarian low-cost airline is establishing its 28th base at Larnaca airport.

The airline will base two Airbus A320 aircraft at Larnaca airport in July.

As Wizz Air sets up its base in Larnaca, the activity will create over 100 new jobs, both with the airline, and even more jobs in associated industries.

A ‘base,’ generally means an airport at which the airline permanently bases aircraft and crew. The aircraft based at the airport do not necessarily always have to be the same tail numbers, but the airline will typically keep a consistent complement of aircraft at a base. The crew don’t overnight in hotels; they go back to their own homes at the end of day.

This means that the airline has important route operations from the airport, and Wizz Air, which is now about 16 years old, is also expanding its routes from Larnaca.

The two Airbus A320 aircraft will support the operations of 11 new routes to Athens, Thessaloniki, Billund, Copenhagen, Dortmund, Memmingen, Karlsruhe/Baden Baden, Salzburg, Suceava, Turku and Wroclaw totalling one million seats on sale from Larnaca in 2020.

All of these destinations are on the government’s list for permitted arrivals in Cyprus, and this could give a boost to the Cyprus tourist industry.

Speaking at a press conference in Larnaca on Thursday, József Váradi, CEO of Wizz Air Group said: ”After ten years of successful operations to Larnaca International Airport, I am delighted to announce our newest base here, as we see the potential and the demand for low cost travel in Cyprus which is one of the most popular and rapidly developing tourist destinations.

“We are dedicated to developing our presence in Cyprus, and offering more affordable travel opportunities to and from Larnaca, while keeping ourselves to the highest standards of our sanitising protocols.”

Eleni Kaloyirou CEO of Hermes Airports added: The choice of Cyprus as the 28th base of Wizz Air at such a crucial time for the aviation industry is a great vote of confidence for us and highlights the rich prospects of Cyprus as a destination.

Around 600,000 visitors are expected to arrive on the island in August, transport minister Yiannis Karousos said during the event.

“We are starting the effort to restore connectivity in our country in the best possible way after we have agreed with one of the largest airlines in Europe, Wizz Air, to establish a base at Larnaca airport,” the minister said. “Initially, there will be two aircraft and then the number of aircraft will increase and the airline will add to its existing routes and destinations another 11 flights to 11 airports and seven countries.”

He added that the benefits for Cyprus were very important, both touristically and financially, as jobs will be created and the fact that the company’s intention is to increase passenger traffic and not to compete with other airlines is also significant.

The deputy ministry of tourism is in daily contact with almost all airlines, Karousos added, in a coordinated effort to bring additional flights to and from various destinations.

He also talked about the gradual lifting of measures starting from June 9. While initially passengers from some countries will need a health certificate, he believes that the tendency is for countries to be upgraded as time passes and things will get easier for passengers travelling to Cyprus.

“According to calculations we have made and based on the data we have so far,” he continued, “in August we will have about 600,000 passengers in Cyprus”.

Asked to comment on the fact that during the lockdown private flights by Russian businessmen to Cyprus took place, the minister of transport said that “any scheduled flights are flights licensed by both the ministry of foreign affairs and the ministry of transport, while no flights were prohibited, private or commercial, if they were licensed. Cypriot citizens or those legally residing on the island, if they had permission, could return to Cyprus either by private jet, commercial flight or repatriation flight.”

All safety rules were followed and whoever returned to Cyprus followed the same protocols, he said, adding that “the virus does not discriminate if someone comes in a private jet or a passenger flight.”

For his part, deputy minister of tourism Savvas Perdios also hailed the Wizz Air move as a great success, “especially under the conditions we live in” and reiterated nobody knows which airlines will be able to survive and how many routes they will be able to maintain worldwide.

Perdios expressed optimism that word was going out abroad and through international media about Cyprus and what it had achieved in containing the pandemic, and how it would tackle any difficult situations.
The fact that Cyprus has decided to treat people who contract the disease during their stay on the island and to offer their family a place to stay is something only a few countries are able to do, he said. “This has been greatly appreciated by our partners abroad and will be one of our strong points this summer,” he added.

That daily tea habit really is boosting your health