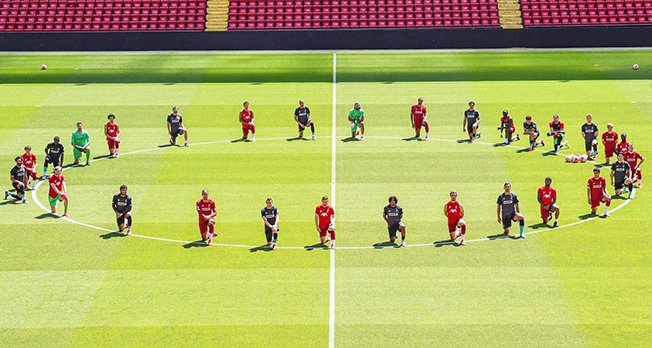 With protests continuing following the death of African-American George Floyd last week, the Liverpool squad on Monday issued their support by taking a knee for #BlackLivesMatter.

The squad were pictured taking a knee around the centre circle at Anfield with several stars tweeting the image with the words ‘Unity is strength’.

It is a welcome contribution from the club, as the Liverpool squad are role models for many around the world, both young and old, from every creed and religion.

Marcus Rashford also spoke out over the killing, saying society is “more divided than ever” in a powerful anti-racism message.

Floyd died last Monday after a white police officer held him down by pressing a knee into his neck and many sports stars have joined in the widespread condemnation.

Manchester United and England forward Rashford said: “I’ve been trying to process what is going on in the world.

“At a time I’ve been asking people to come together, work together and be united, we appear to me more divided than ever. People are hurting and people need answers.
“Black lives matter. Black culture matters. Black communities matter. We matter.”

Rashford has followed his England team-mate Jadon Sancho in addressing the issue after the Borussia Dortmund winger said “we shouldn’t fear speaking out for what’s right”.

‘Justice for George Floyd’ was scrawled on the T-shirt revealed by the Borussia Dortmund winger after scoring the first of what proved to be his maiden senior hat-trick in a 6-1 win over Paderborn.

Ferrari Formula 1 driver Charles Leclerc also gave his opinion after Lewis Hamilton appeared to criticise those in his industry who had chosen not to speak out.

Six-time world champion Hamilton posted on Instagram “I’m one of the only people of colour and yet I stand alone”.

Leclerc responded by writing on Twitter: “To be completely honest, I felt out of place and uncomfortable sharing my thoughts on social media about the whole situation and this is why I haven’t express myself earlier than today. And I was completely wrong.

“I still struggle to find the words to describe the atrocity of some videos I’ve seen on the Internet. Racism needs to be met with actions, not silence. Please be actively participating, engaging and encouraging others to spread awareness.

“It is our responsibility to speak out against injustice. Don’t be silent. I stand #BlackLivesMatters.”

Williams driver George Russell added on the same social media platform: “Now more than ever, we need peace and equality in this world.

“It’s time we all stand together and kick racism out of our societies for good. Use your voice. We’re all responsible for ending the injustice.”

Former England captain David Beckham posted on Instagram: “My heart goes out to George’s family and I stand in solidarity with the black community and millions of others across the world who are outraged by these events. Its heartbreaking to see that in 2020 this is still happening.”

NBA side the Washington Wizards released a joint statement on Twitter, criticising the US government.
It read: “We will no longer tolerate the assassination of people of colour in this country.
“We will no longer accept the abuse of power from law enforcement.

Former West Ham and Newcastle goalkeeper Shaka Hislop lives in Boston and joined a protest march over the weekend.

The 51-year-old is honorary president of ‘Show Racism The Red Card’.
“This is a political issue to be confronted, not a political football to be passed around. And the history of it has to be recognised and respected if it is to be dealt with effectively,” he said.