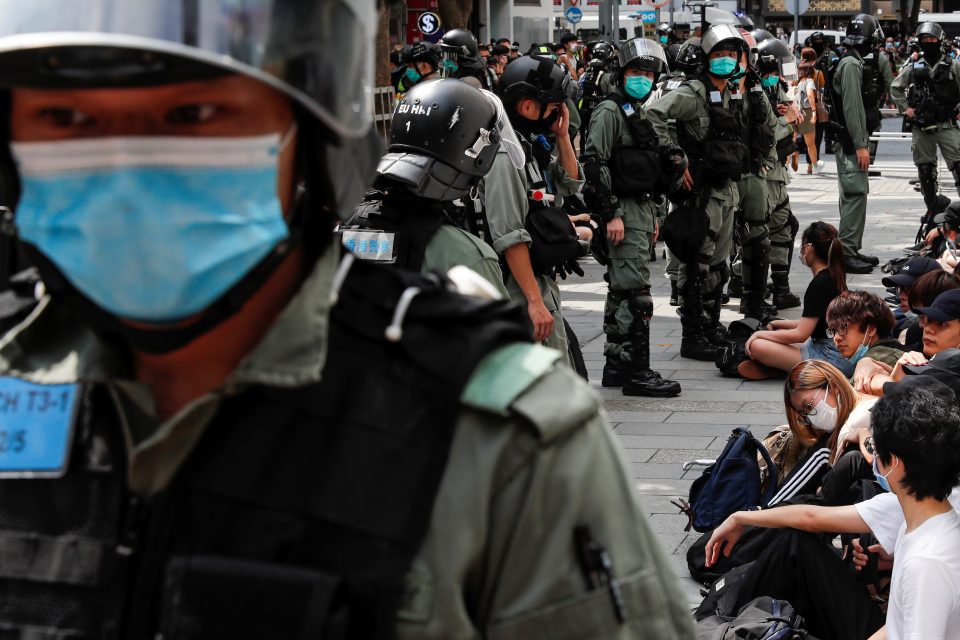 Anti-government demonstrators are detained by riot police during a protest at Causeway Bay as a second reading of a controversial national anthem law takes place in Hong Kong, China May 27, 2020. REUTERS/Tyrone Siu

Hong Kong leader Carrie Lam accused foreign governments on Tuesday of “double standards” in their reaction to Beijing’s plans to impose national security laws on the city, pointing to anti-police brutality protests in the United States.

In her first public appearance after Washington said it will remove Hong Kong’s preferential treatment in U.S. law in response to Beijing’s plans, Lam warned countries threatening actions against the city that they may hurt their own interests.

“In the U.S., we see how the riots were being handled by the local governments, compared to the stance they adopted when almost the same riots happened in Hong Kong last year.”

The laws could also see Chinese intelligence agencies set up shop in the global financial hub.

U.S. President Donald Trump, saying Hong Kong was no longer sufficiently autonomous from Beijing as promised at the time of the 1997 handover of the territory by Britain, said Hong Kong will no longer be treated differently from China in U.S. law.

Hong Kong and Beijing authorities insist rights and freedoms will be preserved, remarks echoed by Lam on Tuesday. She said “public concerns” about the legislation were understandable as a draft was yet to be finalised.

In Washington, police fired tear gas and rubber bullets to disperse peaceful demonstrators near the White House on Monday as Trump vowed a massive show of force to end violent protests over the death of a black man in police custody.

Dozens of U.S. cities remain under curfews not seen since riots after the 1968 assassination of Martin Luther King Jr. Police in some places were also seen joining marches and kneeling in solidarity with the protesters.

Protesters in Hong Kong have mainly been asking for universal suffrage and an independent inquiry into how police handled the demonstrations.

Hong Kong, where protesters reject Lam’s description of the demonstrations as riots, has not enforced curfews. Police have been accused of disproportionate use of force, which officials have denied.

In a separate statement, the Hong Kong government said Lam will travel to Beijing on Wednesday to share her views on the legislation. The top officials for the justice and security departments, Secretaries Teresa Cheng and John Lee, and police chief Chris Tang will join her.

The legislation revived protests in Hong Kong last month, prompting police to fire pepper pellets in the heart of the financial district and make hundreds of arrests.

Demonstrations could continue in coming days, including against a controversial bill that would criminalise disrespect of China’s national anthem, due for further debate in the legislature on Wednesday.

Police this week rejected for the first time in three decades an application to hold an annual vigil on June 4 to mark the anniversary of Chinese troops opening fire on protesters in and around Beijing’s Tiananmen Square, citing coronavirus concerns after new local transmissions were reported in the city.

Lam has repeatedly said a ban on gatherings larger than eight people was to maintain social distancing and had no political overtones.

The restrictions also threaten plans for legally organising anniversary marches of the anti-government protests that started in June last year.

Calls for Hong Kong people to light candles across the city on June 4 and for further demonstrations to be held throughout the month have emerged online anyway.

Man arrested in Limassol in connection with assault