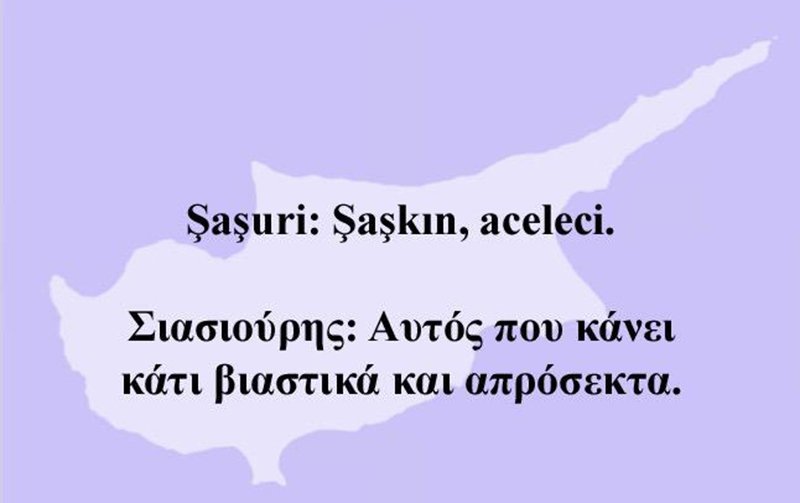 Language separates us from the beasts – but also, alas, from each other. God came up with the Tower of Babel, but humans perfected the art of linguistic division and sub-division all by themselves. Take, for instance, Cyprus, where the official languages are supposedly Greek and Turkish – but what we actually speak (at least when not trying to ‘talk proper’) creates confusion and hilarity in both Greece and Turkey. Turkish Cypriots trying to converse in the motherland tend to be met with ‘Are you from Cyprus? What a cute accent!’, says 19-year-old Vasilis; meanwhile, “with us [Greek Cypriots] in Greece, it’s like ‘Oh my god, I don’t understand a thing! What’s he saying?’.”

Vasilis is one of five people behind a social-media hit called Cyprus Words, looking to celebrate Cypriot culture through our oft-derided dialect. He doesn’t claim to be the spokesman for the team, much less its leader – but he is, in a way, its fulcrum, being the common link between the other four members. It was Vasilis who brought in Constantinos, whom he knew from the army, and Umay, whom he knew from uni (he’s studying Architecture at Northumbria University in Newcastle), having previously become friendly with Melis and Huseyin who ran a similar Twitter page on words from the Turkish Cypriot dialect. The trio decided to replace that page with an expanded bicommunal version – and Cyprus Words was born, its success surprising even its creators. 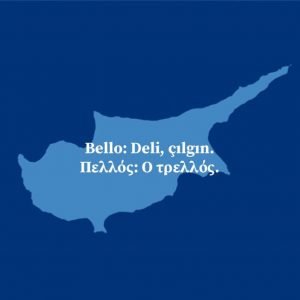 The project has been running for less than a month, but its Instagram page (cypruswords) already has over 900 followers. It’s all the more gratifying in that the whole thing is quite small-scale, a “fun page” put together by the five friends, all of whom are young (in their late teens or very early 20s) and presumably had time on their hands during lockdown. The layout is simple: a new word goes up every three days, usually with a picture post on the same day. The photos depict views of Cyprus, the kind designed to evoke nostalgia in those living abroad (“Christmas! When visiting family” sighs a fond comment – accompanied by a big red heart – on a photo of old Nicosia). The words appear in both Greek and Turkish, with definitions in those languages, plus a caption in English.

So which words count as ‘Cyprus words’? That’s a whole taxonomical question in itself. Language doesn’t just divide us, it also unites us – but language is hard to pin down. The ideal candidates for the project are words which are used only in Cyprus, by Greek and Turkish Cypriots alike, reflecting the unique history of our island as experienced by all its inhabitants. There are about 3,500 such ‘common’ words, enough to keep Vasilis and Co. going for decades. But it’s not always that simple.

‘Pattiha/battisha’, for instance – the local word for ‘watermelon’ – is a great Cyprus word; it’s Arabic in origin, reflecting the island’s history (our dialect also includes quite a few Italian words), and entirely unknown in either Greece or Turkey. Even ‘pattiha’, however, isn’t perfect; it’s falling out of currency among Turkish Cypriots, who mostly use the standard Turkish ‘karpuz’. Also good is ‘pezevenk/pezevenkis’, a term of abuse (literally a pimp; used to mean an immoral person generally) widely used on both sides – but ‘pezevenk’ isn’t unique to Cyprus, being a Turkish word also used in Turkey itself. In the same vein, ‘brostimo/prostimo’ (meaning a fine) is a Greek word, employed in the same way by mainland Greeks. All three have appeared on ‘Cyprus Words’, but for instance ‘trapezi/trapez’ (‘table’) is still being discussed – just because it seems a bit weird claiming a Cyprus connection for such an incredibly common Greek word. 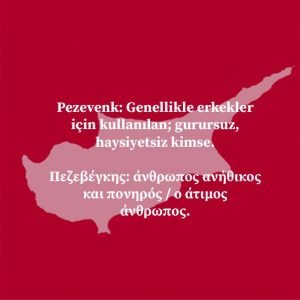 The five team members talk every day, arguing the merits of specific words and voting on which ones to include. The vote is strictly democratic, says Vasilis, and some may be amused to note that Turkish Cypriots (for once) have a slight majority – though in fact that’s the kind of comment that doesn’t really fit with the ‘Cyprus Words’ ethos. “We’re trying to keep it non-political,” emphasises Vasilis.

There it is, the elephant in the room – the sad reality being that, just as having Greek and Turkish on the same page is a red flag (for some people), celebrating Cypriot dialect is automatically a political act (for some people). Already, as the page becomes more popular, it’s starting to attract comments from the easily offended – yet in fact ‘Cyprus Words’ is so charming precisely because it doesn’t pontificate. It really does come across as a modest attempt by five earnest youngsters to revel in their common heritage, the fact that they’re among the few people in the world who’d recognise ‘misharo/misharos’ as a word for a small lizard, and ‘pelekanos/belegano’ as a word for a carpenter. Our aim is “to reveal their Pancyprian character,” says Vasilis, speaking of these words – “and when I say ‘Pancyprian’ I mean from the Karpas to Paphos, not just Nicosia to Paphos!”. Good point.

3 Ways to Clear Negative Energy From Your House