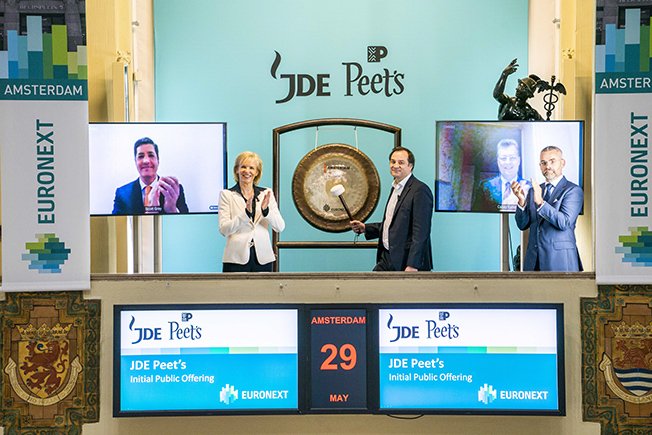 Fabien Simon (C) of coffee maker JDE Peet's beats the gong of the Euronext stock exchange in Amsterdam. The parent company of Douwe Egberts among others, has gone public on the Amsterdam stock exchange

The first major IPO in some months, that of coffee brand JDE Peet’s on the Amsterdam Stock Exchange on Friday, raised $2.5 billion and gave investors around the globe the first twinge of that recovery feeling.

That IPO took only 10 days to raise the large sum and was heavily oversubscribed. Shares in JDE Peet’s jumped by 17 per cent early in its first trading day, and kept rising to close at €36.08. It continued moving higher on Monday. The current market cap is at €18.225 billion.

JDE Peet’s is part of the Reimann family’s JAB Holding Co, which in recent years has acquired a number of major coffee brands including Dowe Egberts, Kenco, Caribou Cofaxfee and Keurig Green Mountain.

This is the largest IPO since 2018, when braking systems maker Knorr-Bremse raised €3.9 billion in October 2018 on Deutsche Börse Xetra. It has sent vibrations throughout the investment community who are hoping that a new IPO season will finally open.

The IPO certainly seemed to lift animal spirits on global exchanges, where investors seemed prepared to downplay the tensions between the Trump administration and China, as well as the novel coronavirus crisis.

“Signs of improvement in growth and gradual opening up of economies have helped boost sentiment from a very low base,” said Mark Nash, head of fixed income at Merian Global Investors. “And there’s still no sign of debilitating second wave of infections.”

Overall, analysts expected far worse from the White House which has only revoked special trade privileges for Hong Kong in retaliation for Beijing’s decision to impose a controversial security law on the former British colony. As Hong Kong does not depend greatly on its trade with the US, investors there seemed unruffled and sent stocks 3.4 per cent higher.

Japan’s Nikkei jumped 0.8 per cent to a three-month high. The Shanghai Composite closed up 2.2 per cent.

But, all that good feeling evaporated as Chinese agricultural firms reportedly moved to cease buying some American agricultural goods. This threatened phase one of the trade agreement between the US and China. Beijing had pledged to buy agricultural goods as part of that agreement.

The bad news from China caused European stocks to reverse gains made in the morning. Germany’s DAX was down 1.65 per cent, hurt as well by news that the IHS Markit German Manufacturing PMI for May 2020 (final) came in at 36.6, slightly lower than analysts had expected. France’s CAC 40, on the other hand, was up 1.25 per cent.

In the US, however, the riots that have broken out in the wake of the George Floyd alleged murder by police officers in Minneapolis have hurt market sentiment. Futures were flat at about an hour before the open, suggesting that stocks will see a lacklustre start of the day.

In the US, investors will be looking at data from manufacturing PMIs for May, and the significant manufacturing index from the Institute of Supply Management. A reading of construction spending for April also is due.

US stocks have enjoyed a remarkable, steady rally over the past few weeks, with the S&P 500 climbing 35 per cent.

A report by Goldman Sachs warned that the dizzying gains won’t last, as a rebound from these highs is likely. Short-sellers are apparently going to have the last laugh.