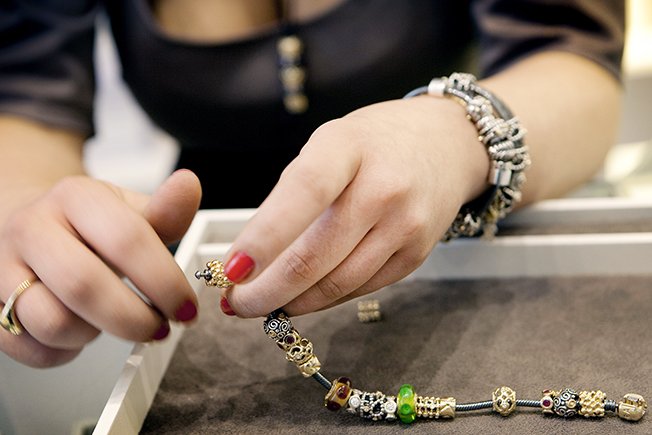 A woman looks at a bracelet at a Pandora store. The Copenhagen-based jewellery manufacturer which had revenue of €2.9 billion in 2019

Pandora, the world’s largest jewellery brand, announced on Tuesday that it will entirely stop using newly mined silver and gold in its jewellery by 2025, and only buy from recycled sources.

This, the company says, will cut carbon emissions by two thirds for silver and by more than 99 per cent for gold.

“Silver and gold are beautiful jewellery materials that can be recycled forever without losing their quality. Metals mined centuries ago are just as good as new. They will never tarnish or decay. We wish to help develop a more responsible way of crafting affordable luxury like our jewellery, and prevent that these fine metals end up in landfills. We want to do our part to build a more circular economy,” comments Alexander Lacik, CEO of the Copenhagen-based jewellery manufacturer which had revenue of €2.9 billion in 2019.

But jewellers in Nicosia and Limassol took a different view. “We’re headed into a recession,” warned Tonia Theodoru, of Tonia Jewellers in Limassol. “That means that many jewellery manufacturers have lots of stock, and so they can recycle that to save money. That’s probably what is behind Pandora’s decision to go with 100 per cent recycled gold and silver.”

A spokesperson for Pandora told the Cyprus Mail that the company did, indeed, recycle some of its stock, but that most of the gold used in its two Thailand factories (with only skilled adult labour) comes from certified refiners.

Still, Panikos Chasikos, vice president of the Cyprus Jewellers Association and owner of Emerald Jewellery in Nicosia, thinks that cost is a factor that Pandora isn’t mentioning. “Recycled gold can be acquired for less than the official price of gold that is determined by the World Gold Council in London. Using recycled gold may save energy, but it also saves money.”

Here, the spokesperson for Pandora is adamant: “We never pay less than the spot price for the gold and silver we acquire,” he says.

Pandora does buy parts for jewellery that are used in their products, and this accounts for a small percentage of the gold and silver it uses. Pandora assures the provenance of these supplies. ”

Pandora is not the only jewellery maker to emphasise the use of recycled gold and silver. Quite a number of manufacturers, particularly in the US and UK, have made a point of having all materials they use sourced from traceable and recycled supplies.

But this has not affected the pace of gold mining which has remained constant at a volume of 2,500-3,000 tonnes per year for many years.

There is a great opportunity, analysts say, in recovering both gold and silver from waste electrical equipment. The United Nations (UNs) estimates of global waste electrical and electronic equipment’s (WEEEs) production were 14 million tons in 1992, and then more than 50 million tons in 2017, and the number is growing at an exponential rate, i.e., approximately 10 per cent every year.

Pandora says that it will try to find ways to increase the relatively small amounts that have been recuperable up to now. New processes are needed.