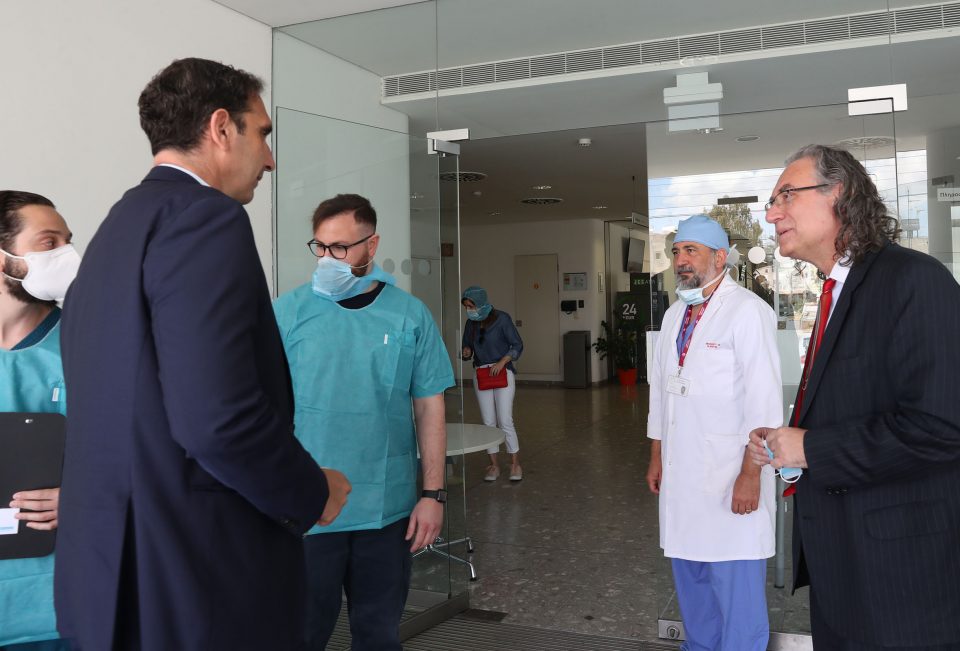 Health Minister Constantinos Ioannou at the Aretaeio hospital on Wednesday

More than 500 patient referrals have been issued during the first two days since inpatient care was introduced in Gesy, Health Minister Constantinos Ioannou said on Wednesday.

“Things are going well,” he said following visits to the Nicosia general hospital and Aretaeio which is among the private hospitals that joined Gesy.

The second and final phase of Gesy covering inpatient care rolled out on Monday.

The minister said 30 private hospitals had signed contracts to participate in Gesy by Wednesday morning while five more were to do so within the day. More will follow within the coming days, he said.

Since Monday, more than 500 beneficiaries have been served as regards inpatient care, he said, adding that there was no information so far as to which hospitals they had been referred to.

The minister said he discussed with the heads of the two hospitals he visited progress so far, pointing out that cooperation between the private hospitals and the Health Insurance Organisation (HIO) that runs Gesy, was very important.

“Only through this cooperation can possible problems be solved and overcome and Gesy improved,” Ioannou said.

Asked about the viability of public hospitals, Ioannou said it was a matter of concern.

“In order for public hospitals to be viable, there must be a cost control. If costs increase recklessly either through wage concessions or through other concessions, they will not be viable,” he said.

He also referred to the consultations between public sector doctors and the state health services organisation (Okypy) that runs state hospitals, on incentives to stop specialists joining the private sector due to better pay.

After a long meeting on Tuesday between Okypy and doctors’ unions on the matter, the two sides agreed to meet again on Wednesday.

Ioannou said he was not concerned and that the issue was being handled by Okypy, with the contribution of the health and finance ministries.

“I think the data, especially the financial ones, are very good,” he said.

Okypy spokesman Charalambos Charilaou told state broadcaster CyBC on Wednesday morning that all that was left was for the two sides to agree on some details, mainly on a formula on the doctors’ productivity.

Head of Pasyki state doctors’ union, Soteris Koumas, told CyBC on Wednesday morning that they have agreed on an across the board pay raise of €1,850 per month to be made available directly to the specialists.

He said that their disagreement, which concerns the remaining €6m of the budget, was over doctors’ productivity.

Koumas said Okypy responded negatively to the unions’ question on whether any additional proceeds to be gained due to doctors’ productivity would be added to the amount discussed.

“That was the deal breaker,” Koumas told CyBC.

Charilaou said that a special committee, in which state doctors would participate, is to look into the matter.