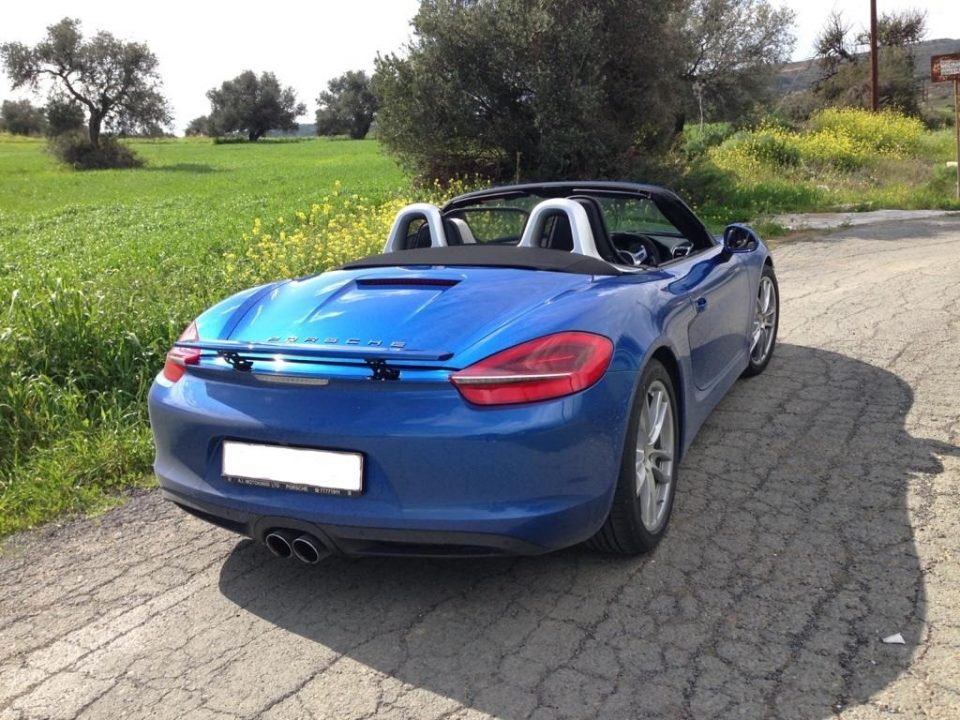 I recently drove a 2015 Porsche Boxster. The standard ‘S’ model produces around 315hp from is 3.4 litre flat-six. This particular example, however, was so heavily optioned by its owner that it not only cost him 50% more than the base car would have, but produces north of 350hp. That, unarguably, is a healthy dollop of power, but having reviewed a G class with well over twice the ponies a few years ago, I didn’t expect to be blown away by the Boxster’s straight-line performance. Indeed, I wasn’t, but my sunny morning drive through along beautiful mountain roads near Argaka did get me thinking: how many horsepower do you actually need?

I pose this question because I am of the opinion that manufacturers these days have lost the plot when it comes to horsepower. To explain why, I’ll start with a short history lesson.

In the 1980s, the likes of the Ferrari F40 and Porsche 959 – the most powerful vehicles for sale at the time, produced in the region of 450hp. Fast forward a couple of decades to 2000, and the most powerful car you could buy, albeit only second hand after 1998, was the 618hp McLaren F1. An increase of around 200hp. So, building on this rate of improvement, we might expect the state of the art hypercars of 2020 to be producing somewhere in the vicinity of 800hp? Or maybe even 900hp? Nope.

Reviewing the hypercar market of today, it becomes quickly obvious that to compete at the pinnacle of power in 2020, you need to be knocking on the door of 2,000hp. A figure evidenced by the Pinnifarina Batista (1,900hp), Rimac C2 (1,914hp) and jaw-dropping Lotus Evija (2,000hp). Now, bar Lotus, you probably haven’t heard of those companies, and there is good reason for that. See, the final 20% of the push towards 2,000hp has been made entirely by electric vehicles, with the new developments accommodating a shift away from century-old international combustion technologies, working fast to level the propulsive playing field and in doing so welcoming various new players to a previously stalemated market. Still, even conventional internal combustion cars have seemingly been on the power-roids.

The original Bugatti Veyron undoubtedly played a leading role in this progression. When it went on sale back in 2005 it was unlike anything anyone had ever seen. 1000hp, in an age when even the famous Ferrari Enzo was packing just 650hp was absurd. Even with a sticker price of around €1.2m, Bugatti lost an estimated €5m on each car they sold. An unprecedent luxury in research and development afforded only by Bugatti’s lenient rich-daddy – VW.

The Veyron signified a paradigm shift in what was mechanically thought to be possible and its 1000hp seems to have intoxicated the sports car industry in the 15 years since its release. Today, companies like Koenigsegg, Hennessey and Bugatti will all sell you an internal combustion car with a factory warranty pumping over 1,500hp.

Interesting, no doubt, but not very relatable. I have never driven any of these cars, and I’ll hedge a bet that most reading this haven’t either, considering the cheapest model amongst the three would set you back about €2.5m. Even so, the trickle-down effect on the rest of the market has been profound. Pre-Veyron, the Ferrari 360 (the mid-engined V8 Ferrari of the time) had 395hp. Today’s equivalent, the F8 Tributo, makes 710. That is a huge step-up for a model which targets the same buyer and occupies the same space within the Ferrari line-up.

Power has become cheap too. In America, you can buy a brand new 797hp Dodge Challenger for under $70,000. While we aren’t quite as ‘lucky’ here in Europe, you can get 600hp – a figure just 10 years ago reserved for the most expensive supercars – on the side of just about anything; be it a 7-seat Mercedes GLS63, a family saloon in the BMW M5 (below left) or even a luxo-barge Rolls Royce Wraith (below right).

But just because you can have it, do you really need it? I don’t think so, and this brings us back to the lovely little Boxster I have been driving. You see, for the €105,500 paid by the car’s owner back in 2015, he could have bought something much faster. And before stepping inside I was under the impression that he probably should have. Or at least I would have. But after just a few minutes of driving, not only was I convinced he had made the perfect choice, but out of amazement at just how fun an experience it was, the very idea for this article was conceived.

Put it in ‘Sport-plus’ mode, open the valves on the optional sports exhaust (because why not) and mash both pedals. Then, when you’re confronted by ‘launch control activated’, release the brake. The acceleration won’t change your life – I managed 0-100km/h in just over 5 seconds. What truly overwhelms, is the glorious, spine tingling wail from the naturally aspirated flat 6 behind you. I realise that not everyone appreciates the way a car sounds, but I challenge even members of the Prius owners’ club not to crack a smile when this car is at full pelt. The power comes high up in the rev range, so you have to wring it out up past 6,000rpm to get a real move on, but my what a pleasure that is! It screams on the way up and crackles on the way down, each instantaneous downshift from that amazing PDK gearbox summoning a fresh wave of sumptuous burbles. You can’t help but smile.

You see, adding horsepower is fun and all, but very often it doesn’t change what you can actually put to the road. The limiting factor in most 0-100km/h times is not power, but rather traction, and to extend the discussion beyond 100km/h would be to disregard not only the majority of usage, but the law. No doubt, if you live in Germany and your commute consists of a long stretch of de-restricted autobahn, you can make the case that you need a 500+hp car. In Cyprus, it’s just irrelevant. Our roads in general are not long enough or wide enough to promote such driving, and ever more stringent policing of highways means that even on the few roads that are long/smooth enough, you run the risk of being slapped with a hefty fine. Not once while driving the Boxster did I think, ‘I wish I had more power’, rather I had the energy to focus on and appreciate the razor-sharp steering and near-perfect balance.

An end of these pointless ‘horsepower-wars’ could see a shift in focus that ultimately benefits more consumers. We have already seen a recognition of this from Volvo, who have implemented a 180km/h speed limit on all new cars. In the not-too-distant-future, electric motors will produce power that we never thought possible with internal combustion. When that time inevitably comes, the engines we will remember, the engines that we will savour and collect will be the ones with character; the ones that put a smile on your face. Engines like this legendary Porsche flat 6.

It is hard, because for the many of us that don’t get to experience supercars, our desires are shaped by what we can comparatively understand. The internet has provided us with ever-easier ways to fuel our fanaticisms – the numerous and easy-reading ‘top 10’ lists online, where horsepower is often the variable by which cars are ranked, pointing us and in turn the market towards ever more powerful products. Porsche may have ceded the ‘bedroom pinup’ accolade to the likes of Bugatti, but for real drivers, for the true petrolheads amongst us, cars like the Boxster remain irresistibly brilliant.