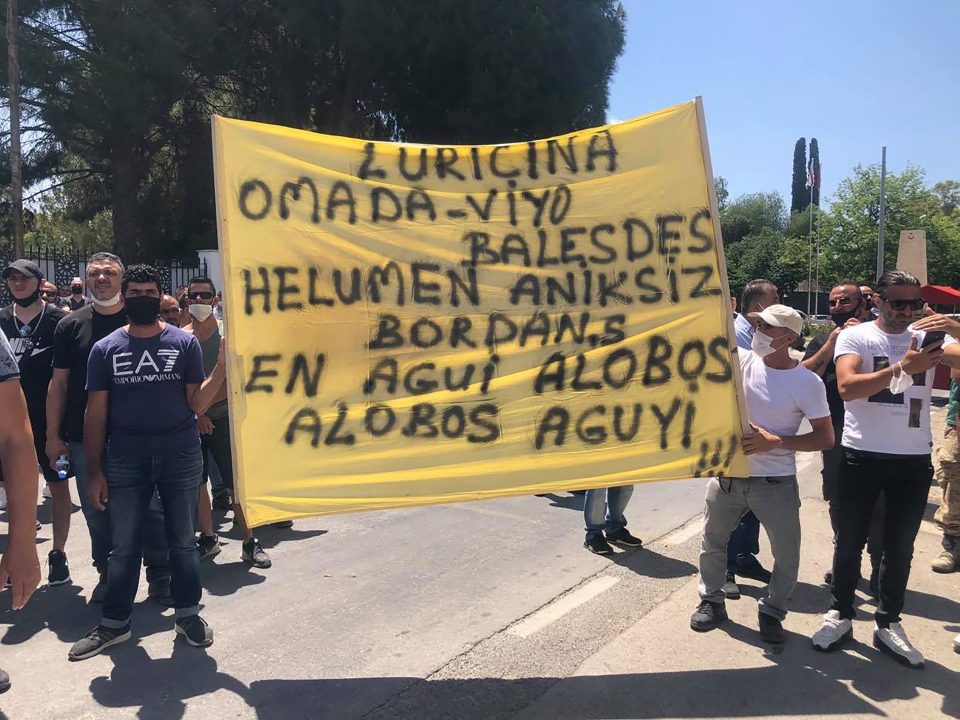 Meetings between stakeholders were ongoing in the north over reopening checkpoints while for the second time this week, Turkish Cypriots living in the north who work in the Republic, held a protest on Thursday.

A meeting between Turkish Cypriot leader Mustafa Akinci and ‘Prime Minister’ Ersin Tatar ended with the former stating his own advisors outlined the situation in the Republic was under control and crossings should be able to be restart.

Tatar said there was no question that crossings should reopen but it was a matter of the conditions which would enable it.

Protestors are demanding a date be set on allowing crossings between both sides so they can return to work, namely June 8.

Holding posters reading “We want to return to work”, “open the checkpoints so we can go to work”, “Tatar-Ozersay out” and calling on the ‘government’ to quit, dozens of protestors gathered in northern Nicosia at around 10:30am and marched to ‘parliament’ at around 11am where they protested for about an hour and a half.

A number of Turkish Cypriots working in the Republic cannot cross over after the closure of crossing points to stop the spread of the coronavirus. A similar protest was held on Tuesday.

Akinci appeared to be dismayed that the Turkish Cypriot side had failed to prepare a comprehensive epidemiological report in time for the meeting on Monday with the bicommunal technical committee on health.

Commenting on the conditions for reopening the crossings Akinci said “what do we want? What is the position of our experts on this? This is what is missing. The Greek Cypriot side has shared with us its epidemiological report.”

The health ‘ministry’ in the north is apparently preparing its own report Akinci said, which was supposed to be delivered to him by Tatar. “I had wished that this report was ready before the technical committee on health. Just like the Greek Cypriot members did, our members should have had such a report on hand. Unfortunately this did not happen. Some members verbally gave some data but the Greek Cypriot side submitted an official report.”

It is the scientists which should set the criteria on reopening the crossings, Akinci specified, while more meetings are set to be held this week with the ‘minister’ of health, deputy ‘Prime Minister’ Kudret Ozersay and members of the technical committee on health.

During the protest, Tatar as well as other ‘deputies’ who were in ‘parliament’ went out to speak to protestors. Tatar told protestors it was his greatest wish that they be allowed to go back to work and that discussions on finding a solution were ongoing.

He asked five protestors to come to ‘parliament’ as representatives and outline their issues but they refused and said they expect the ‘government’ to give them a clear date as to when they can return to work, as they run the risk of losing their jobs.

Israel-Gaza fighting rages as diplomacy yet to gain traction (Updated)