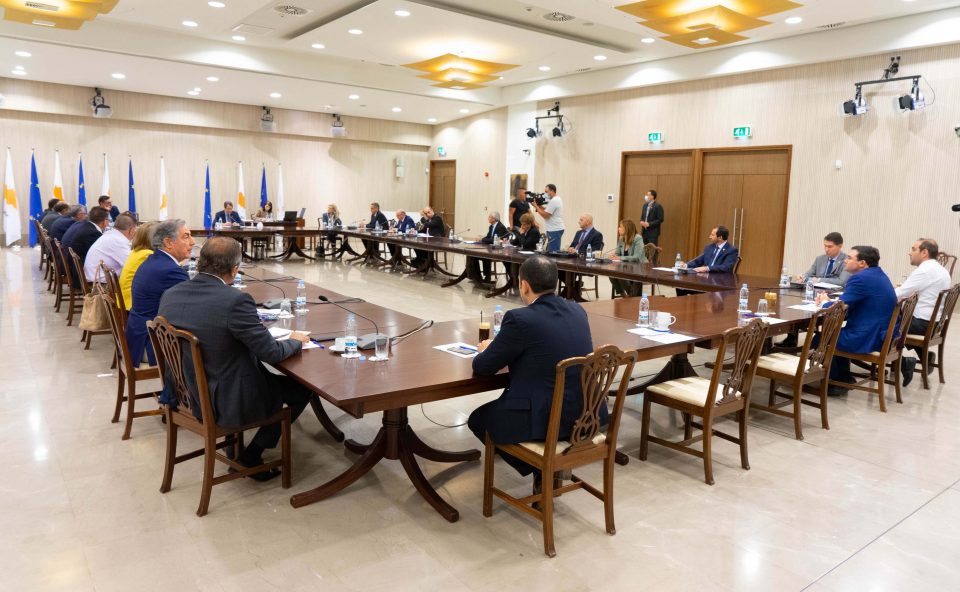 The meeting at the palace with the social partners

The government’s priority is to support employment and it is determined to do whatever possible within its means to preserve jobs, the deputy government spokesman said on Friday.

As part of this policy, President Nicos Anastasiades held a broad meeting with employers, unions, and tourism stakeholders to discuss further measures that could be rolled out to tackle the fallout of the coronavirus crisis.

“The meeting took place in the framework of the social dialogue on the next phase of the labour ministry schemes to support workers and businesses,” Panayiotis Sentonas said.

Sentonas said the government was determined to preserve jobs but any schemes after June 12 will be based on the level of economic activity in the various sectors following the easing of the lockdown.

The spokesman said no decisions were finalised on Friday with the dialogue set to continue in the next days.

One sector that will continue to receive support is that of tourism, which has been hit hard by the virus crisis.

“How exactly the support programme of workers in the tourism industry but also other areas where support will continue, will be determined in the next days,” Sentonas said.

The spokesman could not provide any figures, saying this was the object of consultations between the finance and labour ministries.

“Decisions must be based on the state’s capabilities. Reflation of the economy seems to be going well in certain areas, but we are still in the phase where the circumstances change daily; it’s a dynamic situation.”

“Our main aim was to convince that all businesses which have suffered must be supported to avoid layoffs,” OEV chairman Giorgos Petrou said.

He said overall, bar some exceptions, businesses have managed to keep their staff through the lockdown.

“We hope this continues,” Petrou added.

The chairman of the chamber of commerce Christodoulos Angastiniotis said the tourism industry must be supported until October and possibly March next year.

“There is an intention to support employment within the state’s capabilities,” he said.

Other businesses could perhaps enter similar schemes like the existing ones but with lower subsidies, he said.