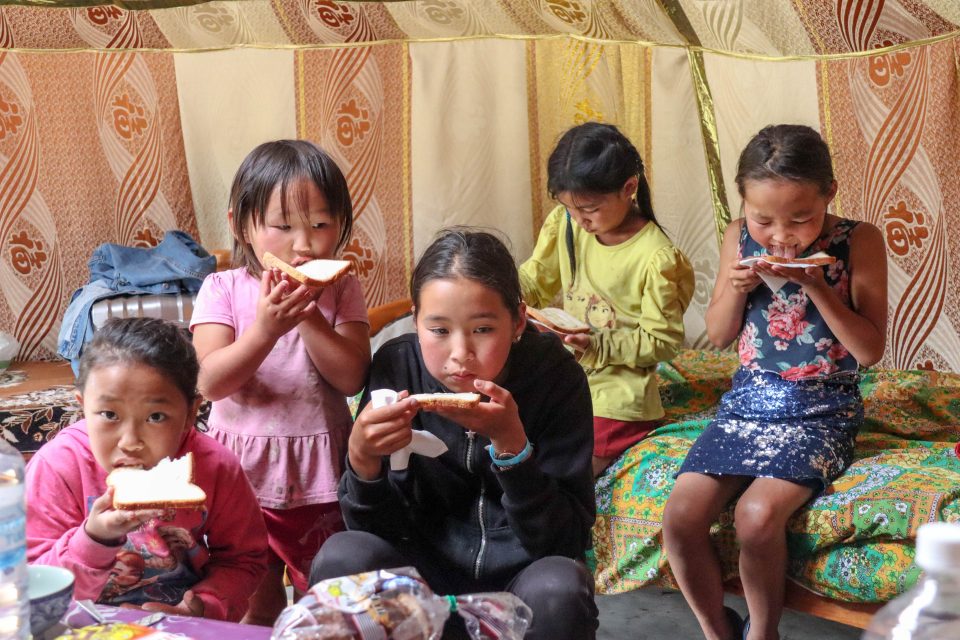 The Special K, Nesquik and Lipton tea boxes were not what I was expecting to see on the shelves of a supermarket on arriving in Mongolia’s capital city of Ulaanbaatar. As I moved around the shop and came across a small IKEA section, I was certain that globalisation had truly reached even the most remote places on earth.

Although the world’s least crowded country, Mongolia is highly polluted although the lifestyle is drastically different that of the West. Nonetheless, exploring its vast and varied landscape was an unforgettable experience, especially when staying with nomad families.

The population of Mongolia is just over three million, with about half living in Ulaanbaatar, hence the pollution and unbearable traffic levels. The rest of the population is spread around the country, with a third adopting the nomadic lifestyle.

Nomads have few belongings, even Marie Kondo’s minimalistic way of living fades in comparison. Moving twice a year to shelter from the harsh weather, it is only logical they minimise their possessions. After all, most of what they need they create themselves from their animals and nature.

They have no fridge, no oven, no European toilet (just a communal doorless wooden hut with a hole in the ground and a breathtaking view), no couches and no smart TVs. The walls of their homes – yurts (or, ger) – are made out of animal skin while a rare shower is taken in the river at night without the luxury of shower gel and shampoo.

Compared to our wifi dependent lives spending a few days with a nomad family, with no internet or technology of any form, was an eye opening experience.

A stay with nomads has to be booked in advance and includes a guide (Google maps simply won’t do it). Our guide Muggie was quick to explain the yurt. “All ger are built with the door facing south to always be able to get your directions,” she said. At the centre of the ceiling was a circular see-through structure which acts as a kind of clock to help nomads track the day with the sun as a guide. Time isn’t a strictly-followed concept though. These white, round, tent-like homes are circular for a reason – corners are believed to trap energy, so a round ger allows energy to flow freely.

Our host Bimba greeted us with milky tea – a big part of the local culture. In much the same way as a frappe serves in Cyprus, this milky tea, which often tasted like sugary warm milk, was too soothing to put down and was consumed throughout the day. 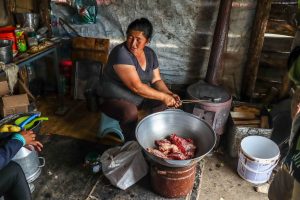 The main attraction in meals was lamb: homemade noodles with lamb bites, dumplings with lamb and a large BBQ meat feast which tasted very similar to kleftiko. In addition to the meat, dairy products make up a large portion of the Mongolian diet. Meat consumption is so high that it creates dark red circles on their cheeks, a facial feature Mongolians are known for but one they are not so fond of – women whiten their skin and try to widen their eyes.

The homes are surrounded by nothingness, endless fields and valleys of velvety green. But in the winter, Bimba and the rest will pack up and settle somewhere in between the mountains to protect themselves from the cold.

Her family are herders, producing several kinds of milk-based goods. A yoghurt biscuit we were offered on the first day was crunchy and sour, similar to dry trachanas. It was an acquired taste but I ended up asking for more. Trays of them lay in the sun drying and baking while Bimba was busy with chores – chopping wood, milking the cows or cleaning up after the children.

The men stay busy training the horses and riding their motorbikes between nomad communities.

From the outside, the nomad lifestyle seems overly simple yet Bimba’s family was always on the go. All the family help with jobs and although there was no internet they did have a solar-powered phone to share between them. 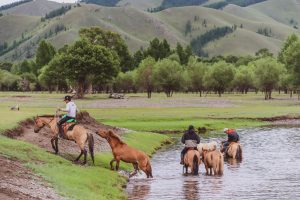 This does not mean they are not up to date with pop culture though. Dresses and backpacks of princesses from the Frozen film took pride of place for the young girls as they enjoyed a game of Uno. When I asked to take their photo, the duck face and the peace sign quickly made appearances, something they no doubt pick up from school, where they will spend the week as it is a long and bumpy ride, returning home for the weekends.

The days stretched out slowly but went by quickly, trying to help Bimba and going horse riding, staring at nature, reading a book, photographing and journaling.

While I was half way around the world and most definitely in a different place if not time, Bimba has only gone to Ulaanbaatar a handful of times and has never left Mongolia.

Perhaps their remote living has been a lifesaver. They were isolating and self-sustaining before the lockdown forced it upon the rest of us. Being effortlessly welcomed into their home, though we exchanged few words and mostly communicated with gestures and smiles, provided a striking memory of Mongolia and tiny insight into their culture. The nomads’ bare way of life – thriving in DIYs and sustainability – seemed primitive at first. Now, it appears more applicable than ever and perhaps there’s a lesson in how to have abundance by owning very little.

The reopening of the all new Almyra

The trials of travelling in the Covid era

How to find the best offshore investment fund?