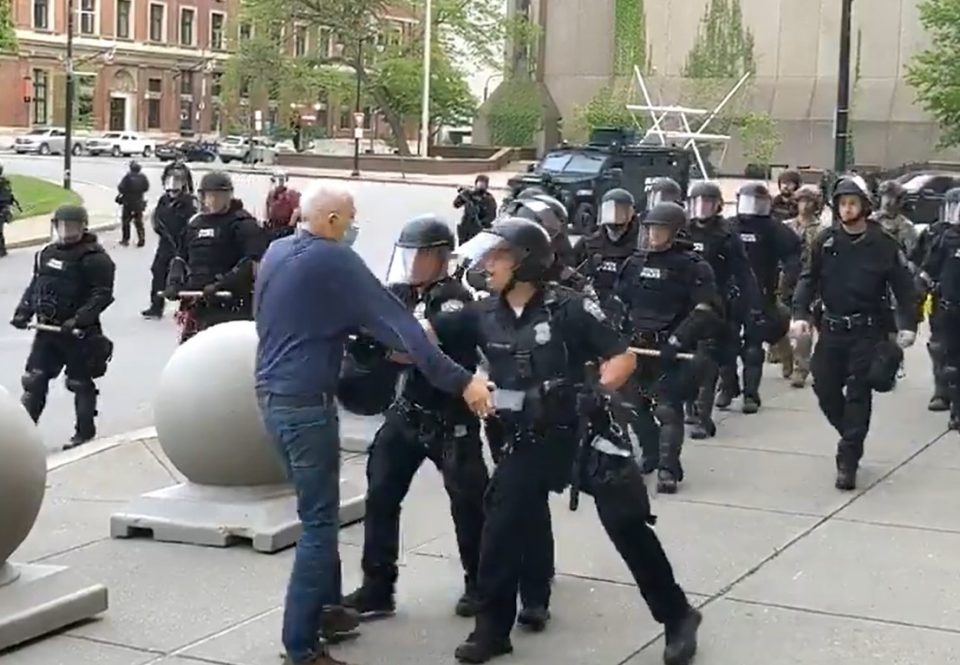 Two Buffalo, New York, police officers were suspended without pay on Thursday after a video showed them shoving a 75-year-old man to the ground, as protests over the police killing of George Floyd continued into their tenth night.

The video taken by a reporter from local public radio station WBFO and posted on its website and Twitter account shows the white-haired man approaching a line of officers in riot gear. One officer pushes him with a baton and a second one with his hand. The sound of a crack is heard and then blood trickles from the man’s head. The man, who is white, is not identified.

“I was deeply disturbed by the video,” Buffalo Mayor Byron Brown said in a statement. “After days of peaceful protests and several meetings between myself, police leadership and members of the community, tonight’s event is disheartening.”

Just about an hour ago, police officers shove man in Niagara Square to the ground (WARNING: Graphic). Video from: @MikeDesmondWBFO pic.twitter.com/JBKQLvzfET

The incident drew widespread condemnation on social media as protesters returned to the streets of several U.S. cities to demonstrate against police brutality.

The video in Buffalo shows the majority of the officers march past after the man falls, though the officer who pushed him with a baton starts to lean over him before he is motioned away by another officer. Someone is heard calling for a medic.

The radio station reported that two medics came forward and helped the man into an ambulance. Police later said that a man was injured after tripping and falling, the radio station said.

But after viewing the video, Buffalo Police Commissioner Byron Lockwood ordered an investigation and suspended the two officers, Brown said.

The 75-year-old victim was in stable but serious condition at Erie County Medical Center Hospital in Buffalo, Brown said. 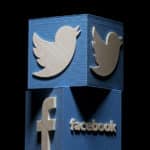 The clip, which is a collation of photos and videos of protest marches and instances of violence in the aftermath of Floyd’s death, has Trump speaking in the background.

The three-minute 45-second video uploaded on Trump’s YouTube channel was tweeted by his campaign on June 3.

The clip, which is still on YouTube, had garnered more than 60,000 views and 13,000 likes. The video-streaming platform’s parent Google did not immediately respond to a request for comment.

The social media platform has been under fierce scrutiny from the Trump administration since it fact-checked Trump’s tweets about unsubstantiated claims of mail-in voting fraud. It also labeled a Trump tweet about protests in Minneapolis as “glorifying violence.”

Trump has pledged to introduce legislation that may scrap or weaken a law that shields social media companies from liability for content posted by their users.