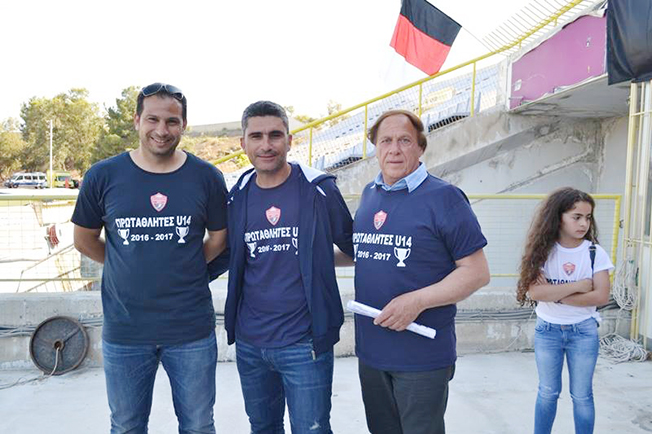 Karmiotissa academy director Andronikos Andronikou (2nd right) is a football veteran, having been in the game for decades The first issue he mentions is the compulsory military service young men have to do. 'Even now with the service reduced to 14 months, it’s still a problem', he says

It’s no secret that the development of homegrown players isn’t a priority for the majority of Cypriot football clubs. Though there’s talk about investing in academy football and developing players, the raw numbers don’t paint a pretty picture.

Last season, a total of 58 Cypriot players had some league playing time with their clubs. Of those 58, 12 had less than a total of 305 minutes of playing time, less than 10 minutes a game over the entire season.

If we look at Cypriot players under 22 years old, that leaves us with 14 players in total. Ten of those featured in eight games or fewer, with an average minutes-to-games-played ratio of 43 minutes, and an average minutes-per-total-games ratio of nine minutes for the entire season.

This season, looking at Cypriot players under the age of 22 and searching for players with at least 400 minutes of playing time, there are only six Cypriot-born players left. One of them is Kosti, owned by Greek club Olympiacos and loaned to Salamina. Danilo Spoljaric and Pavlos Korrea are also on loan but owned by Cypriot clubs.

The three other players under 22 with any significant playing time are Salamina’s Theodosis Siathas, Pafos’ Kyriakos Antoniou, and Ethnikos Achnas’ Giorgos Papageorgiou. None of the above features for a team from the top half of the table, although Spoljaric is owned by Apollon Limassol.

Finally, only five of these players were in the starting lineup at least four times throughout the season.

According to the CIES Football Observatory, the above findings are far from outliers.
Between 2009 and 2017, Cyprus had the fourth-lowest percentage in Europe of club-trained players per squad.

Club-trained players only made up 12.6 per cent of club squads during those eight years. Only Portugal (10.1 per cent), Italy (9.1 per cent) and Turkey (8.8 per cent) managed worse.
Cyprus also had the highest average squad age, roughly 28 years old, older than Italy and Turkey who had an average of 27.

We’ve looked at the number of young players who’ve managed to get some playing time this season. Now let’s look at their relationship with the national team.

Of the players mentioned above, only Kostis is a full international. Correa, Antoniou, Siathas and Spoljaric have been capped at younger age groups. Ethnikos Achnas’ 22-year-old midfielder Giorgos Papageorgiou has yet to feature for the national team at any level. 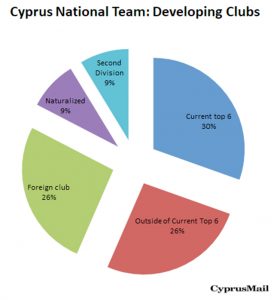 Looking at the game against Belgium which took place in November of 2019, the 14 players that featured for Cyprus have an average age of 26.2, which is not that bad, especially considering the presence of two 35-year-olds in Giorgos Merkis and Fotis Papoulis.

However, how much credit can Cypriot clubs really claim? Again, the squad against Belgium makes for an interesting picture.

A third of the squad was either developed abroad or naturalised. While another third was developed by a division two or non-top six club. While I wouldn’t claim that youth development has been willingly outsourced to smaller or foreign clubs, I would say that it’s been left to chance.

The first issue that Andronikou mentions is the compulsory military service young men have to do. “The army made them lose two years of full-time training. Even now with the service reduced to 14 months it’s still a problem”, Andronikou said.

“Apoel, Apollon, and the other big teams don’t care about the fine”, Andronikou said. “The CFA could enforce three Cypriot players in the starting lineup. This would make clubs seek out Cypriot players and invest in their academies”, he added.

Andronikou also spoke on the pitches currently being used in Cyprus. “Cyprus youth players play on the worst pitches in Europe! We have one pitch to share between so many squads, so many youth levels, maybe even fourth-tier senior teams”, Andronikou said.

Andronikou made specific references to the CFA and their handling of youth football as a whole. “Myself, and other academy directors, not once were we consulted on how youth development should be improved in Cyprus”, Andronikou said.

“The CFA came to split the academies as if this is going to upgrade things. We sent the CFA our rating which should have moved us up a level but they did not listen. We’ve sold players to so many clubs in Cyprus and abroad. Yet we need to charge children and raise money through raffles to pay the fines the CFA imposes on us”, he added.

Andronikou mentioned the way the CFA divided clubs after the league was cancelled. “These people don’t even answer my calls. They take decisions behind closed doors. After the cancellation, they decided to take the 10 top teams, because Apoel, Apollon, Omonoia, and the other big clubs were in the top 10 at the time. If one of them was out of the 10 they would come up with a different solution”, Andronikou said.

I asked Andronikou if he thinks Cypriot children are talented enough to make it and if so then why so few of them turn professional. “Our young players are better at younger levels than some of their European counterparts.

“Our kids have gusto and are competitive at younger levels. As soon as a child knows what football in Cyprus means, that big clubs only want to make money by qualifying for Europe, they get demotivated. There are no incentives for some of these children to persevere. The odds are not on their side”, he said.

Finally, he mentioned his disappointment about the CFA’s lacklustre promotion of women’s football in Cyprus and all the costs it involves: “They want to promote women’s football? Make the registration free! Make it free for young girls to play. They tell me to mind my wording. I’m an academy director. I don’t ask for permission when I speak. I want to help Cypriot football. I want to say that in my last days that football has progressed!”