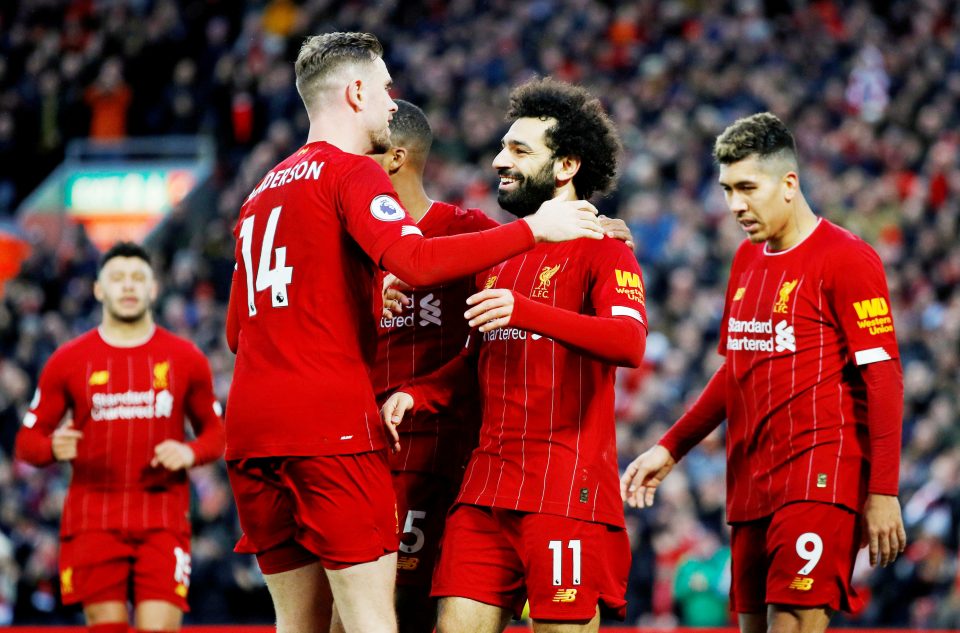 Liverpool’s 30-year wait for a Premier League title could end on home turf at Anfield after fixture details for football’s big return were announced on the same day that rugby union set a date for its own resumption.

The Reds need six points to seal their first championship since 1990, and Merseyside Police have given the go-ahead for what could be the crucial game against Crystal Palace on June 24 to be played at home.

Liverpool’s Premier League matches against Everton and Manchester City, both due to be away fixtures, are the only ones which might have to be played at neutral venues with police forces and local authorities giving approval for the rest of the initial 32 confirmed fixtures to remain as scheduled.

The league’s 100-day shutdown will end on June 17, starting with a double header to be broadcast on Sky Sports – Aston Villa hosting Sheffield United at 6pm before Manchester City welcome Arsenal at 8.15pm.

The first ever live Premier League fixture on BBC television will be Bournemouth versus Crystal Palace on Saturday, June 20, while BT Sport will feature a first of its own by screening Brighton’s match against Arsenal at 3pm on the same day – typically a ring-fenced ‘blackout’ window for domestic broadcasters.

BT has confirmed viewers will have the option to include simulated crowd noise as they watch.

The broadcaster will screen 30 of the remaining 108 matches in the 2019-20 season in the second tier, which is set to resume on Saturday, June 20 after being suspended since March.

Premiership Rugby’s restart will be just over two months behind but confirmation that the competition is aiming to get going from August 15 represents positive news for the sport.

Play was indefinitely suspended on April 8 but after an agreement was reached over the resumption of contact training, the date was fixed at a board meeting.

Premiership Rugby chief executive Darren Childs said: “Nothing will happen until it is safe to do so but we will do everything we can to resume the 2019-20 Gallagher Premiership Rugby campaign on Saturday 15 August.”

There is no such prospect in the Women’s Super League, where Chelsea have been confirmed as 2019-20 champions following last month’s decision to abandon the campaign.

The Football Association board reached the majority decision to settle the table on an unweighted points-per-game system, handing the trophy to Emma Hayes’ side and seeing Manchester City into the Women’s Champions League in second place.

Liverpool have been relegated to the Championship and will be replaced by Aston Villa, who were awarded the second tier title via a similar equation.

England international Jadon Sancho, already back in action with Borussia Dortmund, has been fined by the German league for breaching the country’s coronavirus restrictions to have a haircut.

The 20-year-old and team-mate Manuel Akanji were fined after photos emerged of them having a trim in their own respective homes, with neither the players nor the hairdresser wearing personal protective equipment (PPE).

“The players from Borussia Dortmund had obviously violated general hygiene and infection protection standards at home hairdressing appointments and in particular the medical-organisational concept of the DFL task force,” said the DFL.

The PGA Tour will allow spectators at next month’s Memorial Tournament.

The event from July 16-19, held at Muirfield Village in Ohio, will be the first with fans in attendance since the coronavirus pandemic.

The PGA Tour resumes next week with the Charles Schwab Challenge but the first five events will be behind closed doors.

With the PDC Home Tour drawing to a close, the organisation has confirmed the BetFred World Matchplay tournament will take place from July 18-26. A decision on the admittance of fans at Blackpool’s Winter Gardens will be made at the start of the month.

There was also a minor step forward for recreational cricket in England as club players were given the go ahead to train in groups of up to six, including a coach.

The move brings sport into line with more general Government advice at a time when furloughed county professionals remain unable to practise under the terms of the arrangement.

As Scottish football clubs look to return to training from June 11, Aberdeen say they remain committed to getting a Covid-19 testing machine but lower-league clubs have been told the costs of the screening regime will be prohibitive.