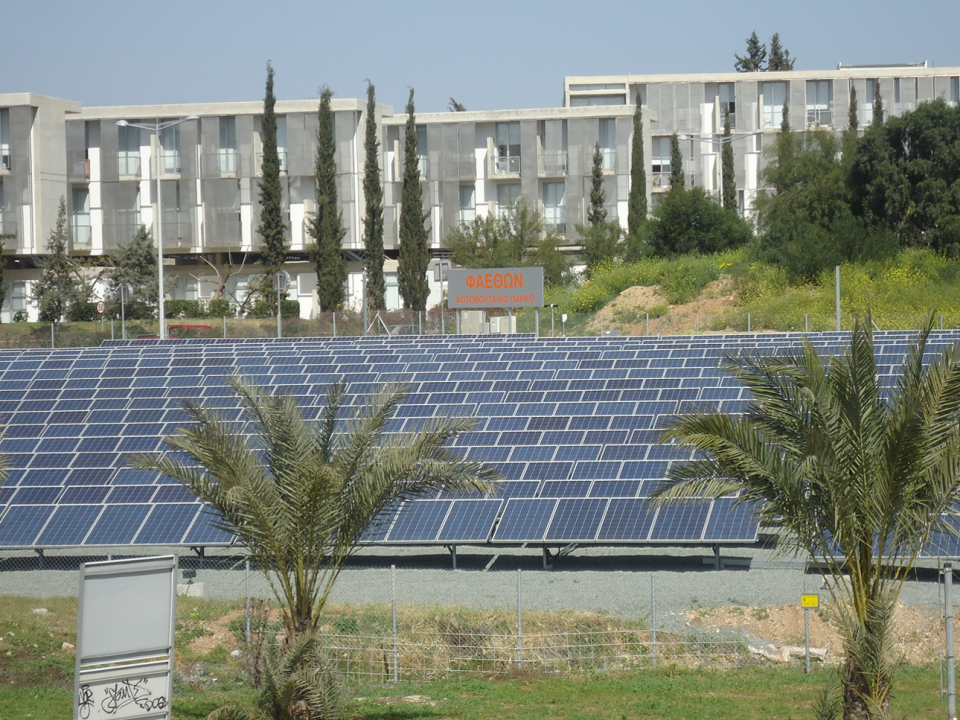 Photovoltaics at the University of Cyprus

For the first time in its history, Cyprus has the chance to be energy independent, and it’s not from gas

Down through history, the nations that had a competitive advantage were those that enjoyed scientific and technological superiority, and, of course, cheap energy.

For the first time in the history of mankind the countries of the south appear to have an important comparative advantage – the sun. In a few years, the sun will constitute the main source of electric power and this will make countries with high sunlight exposure more competitive at all levels. And of course, the stories about pipelines and natural gas will then sound as distant and obsolete as the telegraph does today.

Through access to cheap energy, there would also be access to abundant and cheap water. In a decade from today, southern Europe and Mediterranean Africa will export solar electrical energy to Europe. The Sahara desert will prove a big treasure. The south will be self-sufficient in energy, for which there will also be huge potential for export.

Let us focus on our own country though, and envision the creation of a sustainable, alternative green economy. Let us examine, how, on a practical level, we could create a virtuous energy cycle.

The production and supply of cheap electric power would not simply supply households and people. It would in parallel bring to the fore small industries and businesses that today are not viable because of the high cost of electricity. This alternative development would lead to the creation of thousands of new jobs.

For the sake of brevity, let us call this programme Kypros-2025. The Cyprus Republic, within the framework of an ambitious green development programme, must contribute by providing government land of an area of 30 square kilometres for the installation of photovoltaics of 2000MW on a long-term lease with favourable terms.

The big photovoltaic parks, with the use of alternative systems of electricity storage (hydro-storage, giant batteries and hydrogen production) will transform Cyprus into an autonomous country, energy-wise, with great political, social and economic benefits.

It is worth looking at the numbers. The cost of 2000MW photovoltaics, together with a system of electricity storage comes to about €2.4 billion. Such a system would provide us with 100 per cent of our electricity generation. Today the Electricity Authority of Cyprus spends about €500 million per year on the purchase of fuel (in normal times). This expense will become zero with the creation of Kypros-2025. In just five to six years, therefore, we would have saved from importing fuel an amount that would cover the total cost of the Kypros-2025 investment. Parallel to this, the cost of a kWh (kilowatt-hour) would drop from 12 cents today to 6 cents. This is the only real opportunity for people in Cyprus to benefit from a significant reduction in the price per kWh because those promising a price reduction with the arrival of natural gas are misleading people. For completing the Kypros-2025 project it would require about five years.

I am certain there are questions as to whether it is technically feasible to incorporate and adjust such a big photovoltaic system to the power network. The answers can be found in international bibliography.

Let us also look at the funding of Kypros-2025. The population of the Republic is today about 875,000. A social company could be established in which every Cypriot should be given the opportunity to invest, so as many people as possible would have a stake in it. It would be a low-risk investment and people would become stakeholders, enjoying a respectable annual return on their investment. Banks, which in today’s economic conditions have difficulty finding worthwhile projects to finance, could show an interest in financing such an investment.

The political significance of the Kypros-2025 project is huge as it will be based on social participation. The country’s citizens – ordinary people and especially the young must be part of production, development and prosperity. Our country and economy need a new model and new development architecture that will have at its centre the green economy and social participation. It is worth noting that no political grouping, from the Left to the Right, ever showed any interest in such an approach. The big investments in renewable energy sources are always of the monopolistic type. It is this logic that my proposal wants to challenge.

Our country has the big advantage of sunshine. We have made a commitment to the EU that a large part of our energy mix will come from the sun before 2020. With this specific proposal this target will be met in no time and it will make it more competitive at all levels. With access to cheap and abundant water, which comes from access to cheap energy, we would be able to recreate the lakes we lost and fix the damage done to our underground water supplies.

The sun as an energy source has brought real hope to humanity, thanks to its decentralised nature. The big difference is that it belongs to everyone, to the whole of society. It does not have the characteristics of the concentrated power of the big electricity production units. It is not possible for solar electric energy to be shared among private monopolies, in the same way the political system issues licences to wealthy businessmen. It is known that the EU is trying to introduce competition in the purchase of electric power, but it should also be taken into account that Cyprus is isolated energy-wise with very limited prospect of real competition.

We can create a modern, green, social company for our country and our people, a company in which all citizens of Cyprus would be able to have a stake, following the model of the big social companies found in the Scandinavian countries.

Let us become the Denmark of the south.

Constantinos Christofides is a professor of Physics at the University of Cyprus and coordinator of the social movement Neo Kyma – I Alli Kypros.

Glimpses into life and history