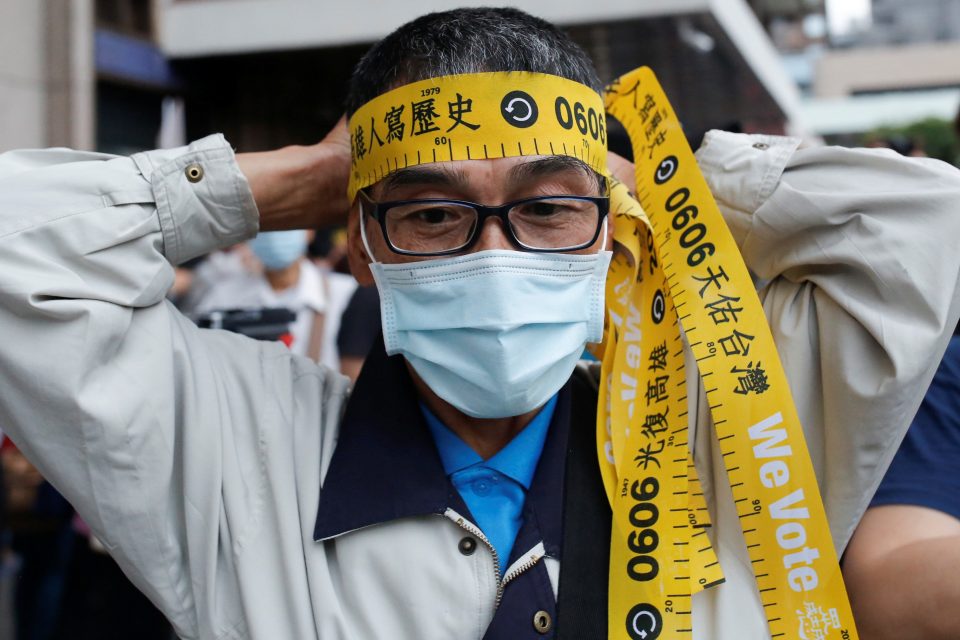 A man tights a yellow ribbon on his head to encourage people to vote to recall the Kaohsiung Mayor Han Kuo-yu in Taipei, REUTERS/Ann Wang

Taiwan’s main opposition party moved to distance itself from China after one of its most senior officials lost a highly charged recall election, as attitudes harden towards Beijing on the democratic island claimed by China.

The Kuomintang, or KMT, was already reeling from losing presidential and parliamentary elections in January, having failed to shake off accusations from the ruling Democratic Progressive Party (DPP) it wanted to sell out Taiwan to China.

On Saturday, the KMT’s defeated presidential candidate, Han Kuo-yu, lost by a wide margin a recall vote for his position as mayor of the southern port city of Kaohsiung.

Opponents portray Han and the KMT as doing China’s bidding by supporting Beijing’s “one country, two systems” model to get Taiwan to accept Chinese sovereignty. The KMT says it has never supported this.

After the recall, the KMT reasserted its opposition to Beijing, as well as a “Taiwan first” stance.

“Chairman Johnny Chiang of the KMT states firmly that the Party – opposed to communism and aimed at building a democratic, free, prosperous and united country – and its members have always put Taiwan first for the benefit of the people,” the KMT said in a statement late on Saturday.

Han – who last year visited China and met its top Taiwan-policy maker and met in Hong Kong with its leader Carrie Lam before the Chinese-ruled city was engulfed in anti-China protests – has said he was simply trying to drum up investment for Taiwan and reduce the risk of conflict.

The vote took place amid further tensions in Hong Kong over Beijing’s move last month to impose national security legislation on the city, a measure strongly opposed by all Taiwan’s main parties in a rare show of unity.

Sentiment in Taiwan towards China has soured further not only due to the Hong Kong protests, but also Chinese pressure to keep Taiwan out of the World Health Organization during the COVID-19 pandemic.

The KMT, under youthful new leader Chiang, is reviewing its policies, especially its unpopular stance of seeking closer ties with Beijing, which has never renounced the use of force to bring Taiwan under its control.

Adding to the KMT’s woes, the Kaohsiung city council speaker, a KMT member and strong supporter of Han’s, jumped to his death late on Saturday after the mayor lost the vote, police said.

Prominent Hong Kong pro-democracy activist Nathan Law congratulated Kaohsiung’s people for the recall vote, saying Hong Kong’s people would be envious as they could not do the same with their own leader.

“When we have liberated Hong Kong, I hope Hong Kong will be like Taiwan is now, the envy of others.”