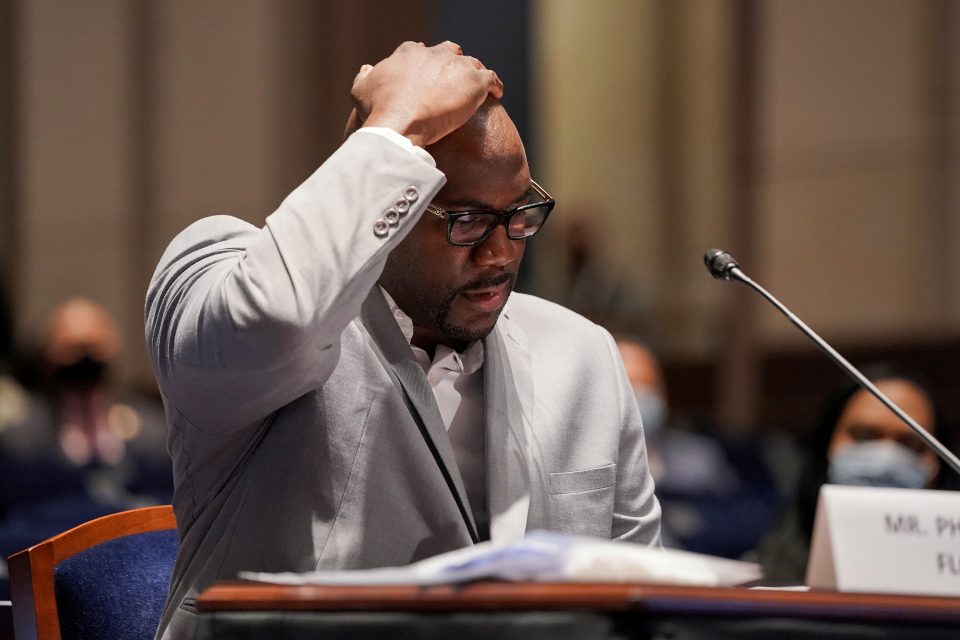 Philonise Floyd, brother of George Floyd, pauses as he gives his opening statement during a House Judiciary Committee hearing to discuss police brutality and racial profiling, in Washington, DC

A brother of George Floyd took his grief to the US capital on Wednesday with an impassioned plea to Congress not to let his brother die in vain, lamenting that he “didn’t deserve to die over $20.”

Floyd, a Houston native who had worked security at nightclubs, was unarmed when taken into custody outside a corner market where an employee had reported that a man matching his description tried to pay for cigarettes with a counterfeit bill.

“George wasn’t hurting anyone that day. He didn’t deserve to die over $20. I’m asking you, is that what a black man’s worth? $20? This is 2020. Enough is enough,” Philonise Floyd, 42, of Missouri City, Texas, near Houston, told the lawmakers. “It is on you to make sure his death is not in vain.”

He buried his brother on Tuesday and became emotional at the witness table while describing how they had not been able to say goodbye.

“I’m here to ask you to make it stop. Stop the pain,” Floyd testified. “George called for help and he was ignored. Please listen to the call I’m making to you now, to the calls of our family and the calls ringing on the streets of all the world.”

It was not clear whether Democrats and Republicans will be able to overcome partisan differences to pass legislation that President Donald Trump would be willing to sign. White House spokeswoman Kayleigh McEnany told Fox News that Trump could take policy action on race and policing through an executive order, but did not provide details.

Officer Derek Chauvin, who was fired after the incident, has been charged with second- and third-degree murder and manslaughter. George Floyd and Chauvin both worked as security personnel at the same nightclub.

Philonise Floyd said Chauvin knew his brother and killed him “just because he didn’t like him,” adding that “it has to have something to do with racism.”

“So, for him to do something like that, it had to be premeditated and he wanted to do that,” he added.

The emotionally charged hearing had lawmakers and witnesses including several civil rights advocates expressing sorrow over Floyd’s death, the latest in a long string of killings of African-American men and women by police that have sparked anger on America’s streets and fresh calls for reforms https://www.reuters.com/article/us-minneapolis-police-protests/minneapolis-city-council-pledges-to-disband-police-trump-lashes-out-at-nfl-idUSKBN23F0L1.

The hearing also highlighted divisions in Congress and the country between those who want sweeping changes to policing practices and those who defend the work of law enforcement and blame any problems on, as Republican Representative Mike Johnson put it, a “few bad apples.”

The committee is preparing to shepherd the Democratic legislation to the House floor by July 4.

“While we hold up human rights in the world, we obviously have to hold them up in our country,” said Representative Karen Bass, chairwoman of the Congressional Black Caucus, which crafted the legislation.

Angela Underwood Jacobs, a Republican witness whose police officer brother was slain during rioting this month, urged lawmakers to promote a just society by investing in education, housing and job creation.

The Democratic legislation has put Republicans on the defensive, prompting them to showcase support for law enforcement and to accuse Democrats of wanting to “defund” the police, an approach touted by some activists on the left but opposed by top Democrats.

The legislation would ban police chokeholds and no-knock warrants, allow victims and their families to sue police for damages, restrict the use of legal force, require police body cameras, make lynching a federal hate crime and take other steps to rein in misconduct.