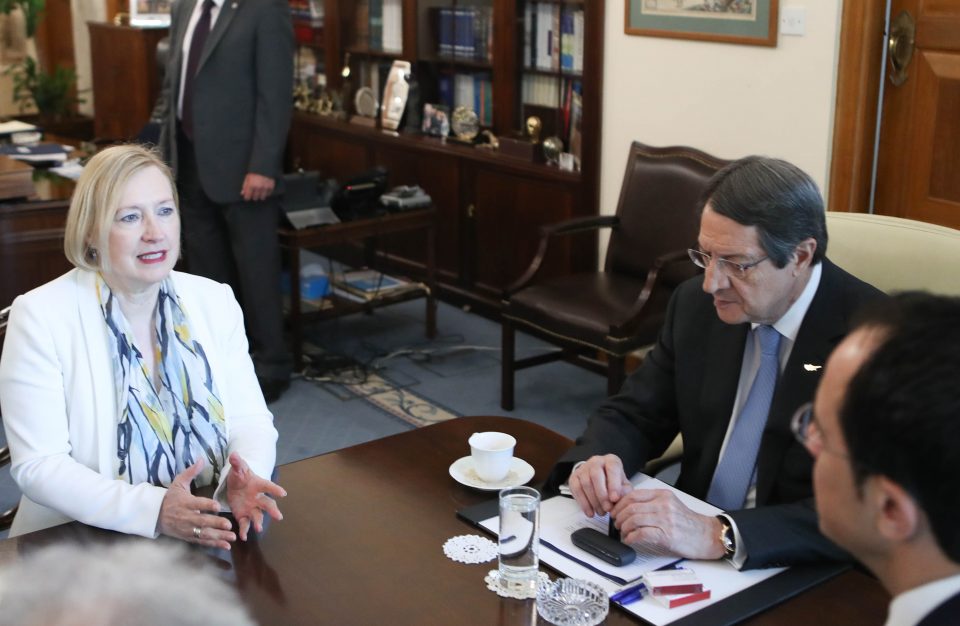 Government takes Elizabeth Spehar to task over lack of objectivity

ELIZABETH Spehar, the UN special representative, mishandled the issue of the crossing points and the attack against her by the Cyprus government was an understandable response, a high-ranking foreign diplomatic source has told the Sunday Mail.

“This was a highly political matter and there was no need for her to become involved, as she would have been thought to be taking sides,” said the diplomatic source, on condition of anonymity.

“She has burned her bridges,” he said, referring to the March 5 statement in which Unficyp censured the Cyprus government for unilaterally closing four of the nine crossing points.

However, Spehar’s office did not issue a written statement censuring the ‘government’ in the north after it blocked the deal reached by President Nicos Anastasiades and Turkish Cypriot leader Mustafa Akinci, allowing limited movement through the crossing points from June 8. The ‘government’ in a clear attempt to undermine Akinci then said that anyone crossing north from the Republic would have to go into 14-day quarantine, thus preventing thousands of Turkish Cypriots from returning to their jobs in the south.

On March 5, after Spehar met Akinci, Unficyp issued a statement directed at the Cyprus government’s unilateral decision expressing concern about closure of four crossing points. It told the two sides that “it is imperative for the two sides to coordinate closely in order to provide a comprehensive response to the potential public health emergency”. Last week, however, it avoided taking a stand on the Ersin Tatar ‘government’s’ spoiling tactics.

Commenting on the matter, Unficyp spokesperson Aleem Siddique, told the Cyprus News Agency on Wednesday: “It is imperative for the parties to continue coordinating closely on the opening of the crossing points. The (UN) mission stands ready to assist both sides on the way forward.” The reality was that the two sides had coordinated at leadership level, but their deal was undermined by the Turkish Cypriot ‘government’.

This lukewarm response by Unficyp angered Anastasiades, who accused Spehar and Unficyp of a “lack of objectivity” in a television interview broadcast on Thursday night by Antenna TV. He said he had instructed the foreign minister to send her a letter of protest about her office’s “contradictory” behaviour, adding that the letter would also be forwarded to the UN secretary-general.

He interpreted Unficyp’s stance as implying that his government should coordinate with the ‘government’ in the north, which is out of the question for the Greek Cypriot side.

“If they [Unficyp] have not realised that the two sides have cooperated at the allowed, acceptable [leaders’] level, if they are under the impression that the legal government will come into contact with an illegal entity, they fool themselves,” he said in the interview.

“My interlocutor and that of each President of the Republic since the time of Archbishop Makarios has been the Turkish Cypriot leader,” he said.

On Friday morning, Foreign Minister Nicos Christodoulides fired another broadside at the UN, dismissing its statement on the crossing points as “unacceptable”. Speaking on the CyBC, he said Unficyp’s failure to take a clear stand was condoning the behaviour of the Turkish Cypriot politicians who had blocked the implementation of the Anastasiades-Akinci agreement on the crossings.

“Unficyp should have taken into account what has happened and its position in the recent past, be clear about the need for the crossings to open and what has been agreed between the two leaders to be implemented,” said Christodoulides.

The government had been waiting for this opportunity to get even with Spehar after Unficyp’s March 5 statement, which had infuriated Anastasiades.

“I think interventions concerning the policies of a sovereign country, the Republic of Cyprus, which is a recognised state of the United Nations and the European Union are unfortunate,” he said at the time.

He also refused to see Spehar who had requested a meeting with him immediately after her March 4 meeting with Akinci. It is common practice for the UN Special Representative to follow a meeting with one leader by a meeting with the other. There has been no meeting between the two since the Unficyp written statement, described by the diplomatic source as “a big mistake”.

This was not the first falling out between Spehar and the government, although the previous row was conducted in private. It involved Christodoulides having a heated exchange with her over Unficyp’s stance in a dispute regarding the placement of some barrels on the dividing line in Strovilia that was combined with the Turkish army allegedly moving some metres into the buffer zone.

The government, according to reliable sources, had wanted Spehar, who was appointed in 2016, removed from her post before the crossing points row, but recently her contract which would have ended in 2020 was extended by another 12 months.

“This was only because of the coronavirus,” said the diplomatic source.

What has raised questions is the timing of the government attack. In a few weeks’ time the UN Security Council will be discussing the renewal of the Unficyp mandate. The last few times this was discussed, questions were raised by permanent members, particularly the US, as to whether it was justified to maintain the peacekeeping troops in Cyprus.

Picking a fight with the Secretary-General’s Special Representative at such an important time could backfire. Akel spokesman Stefanos Stefanou warned on Friday that “any reactions by our side must be cautious so they do not give the impression that the Greek Cypriot side is clashing with the UN.” He added: “It is historically proven that a clash of our side with the UN never led to positive results.”

The truth is that these clashes never led to negative results either. There have been far more vicious attacks on UN envoys or special representatives over the years, the most recent being the one directed at Australian Special Representative Alexander Downer a little over 10 years ago. The only difference was that the attack on Downer was led by the media and the political parties, the government of the time taking a back seat.

This time the government is leading the offensive and Spehar has followed the policy of her predecessors in the same predicament – silence. It was, however, a policy she failed to adopt when the Anastasiades government decided to close four of the nine crossing points.