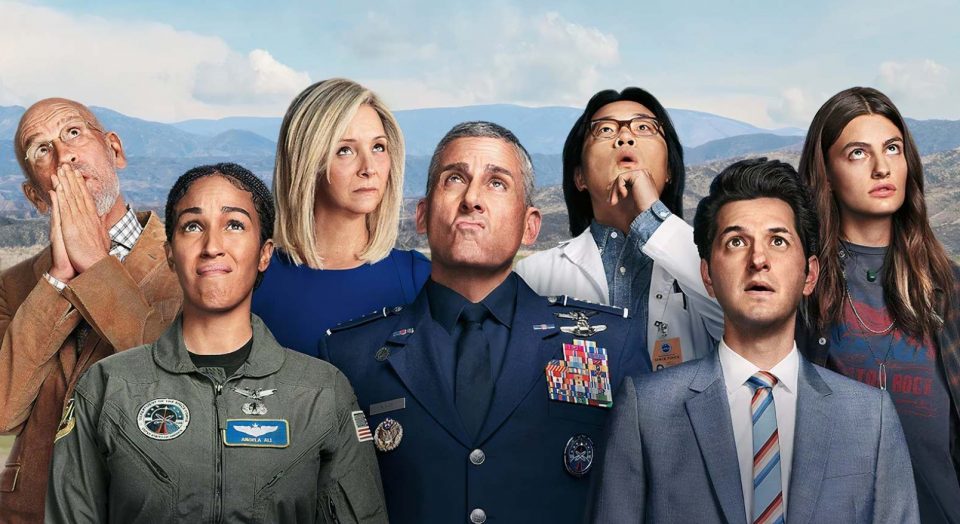 With a combined previous catalogue including The Simpsons, Parks and Recreation and The Office, the team behind Netflix comedy Space Force – Steve Carell and Greg Daniells – had a lot to live up to.

Space Force is a workplace comedy based around the United States Space Force, the sixth branch of the United States military. The show starts with the birth of Space Force and jumps ahead one year to its implementation, using a number of in-house hurdles, personal issues and various outside factors to fuel the comedy.

The show has a sizeable cast of characters, some recurring, others introduced at different points during the season. Carell’s General Naird and John Malkovich’s Dr Adrian Mallory are the show’s main driving force, both in how their characters interact with each other, but also in how they affect other characters around them.

It is no surprise that two of the most often-seen characters are rooted in seemingly opposing ends of the philosophical spectrum. One in the military, the other in science. This is the crux of the show.

Space Force is by and large a collection of political and social commentary dressed as a comedy. Yes, there is some character development and the relationship between some of the characters affects the story, but it doesn’t appear to be pivotal to what the show wants to be.

The show largely exists within our own universe and timeline but goes to great pains to not mention the names of real people or mimic real events in an absolute fashion. Space Force is very much a product of the age of Trump. Though he is never referenced by name, the show’s erratic, science-averse, ever-needy and spectacle-obsessed POTUS is modelled after the 45th president of the United States.

The analogues to real-life people don’t stop there. There are avatars for congresswomen Alexandria Ocasio-Cortez and Nancy Pelosi, an amalgamation of Elon Musk and Elizabeth Holmes, as well as references to the Brett Kavanaugh supreme court hearing. The show uses these people and their backgrounds to craft various battles along the broad battle lines of reason and patriotism, both concepts already somewhat warped within the broader context of US politics.

The show is very well-cast, economically written, and well-produced. Unfortunately, these are not enough to make it stand out in any discernible way. It’s not a bad show, at times it’s even good, but for the most part it’s just kind of there. There’s nothing grossly offensive about its tone or ideas, but its highs are fairly few and far between.

Of course, this is not a laugh-track show machine-gunning jokes at you and it’s all the better for it. However, it just isn’t focused enough to make one excited by its style of comedy. It relies heavily on characterisation and the ability of the actors to banter with each other, elevating the mood through steady interaction rather than any overreliance on punchlines.

This creates some unevenness throughout the show, where some characters click with each other in a way that other combinations just don’t. Captain Angela Ali (Tawny Newsome) and Dr Chan Kaifang (Jimmy O. Yang) are delightful together.

The show’s first season is far from a definitive story. Its high production values suggest that there’s a desire to create a show with an ongoing storyline that feeds on real-world current events. The first season contains both capability and potential if not a real spark. Perhaps Space Force’s second season will truly allow the show to come into its own.

18 times architecture was in complete harmony with nature

Coronavirus: Measures will help farmers in all regions