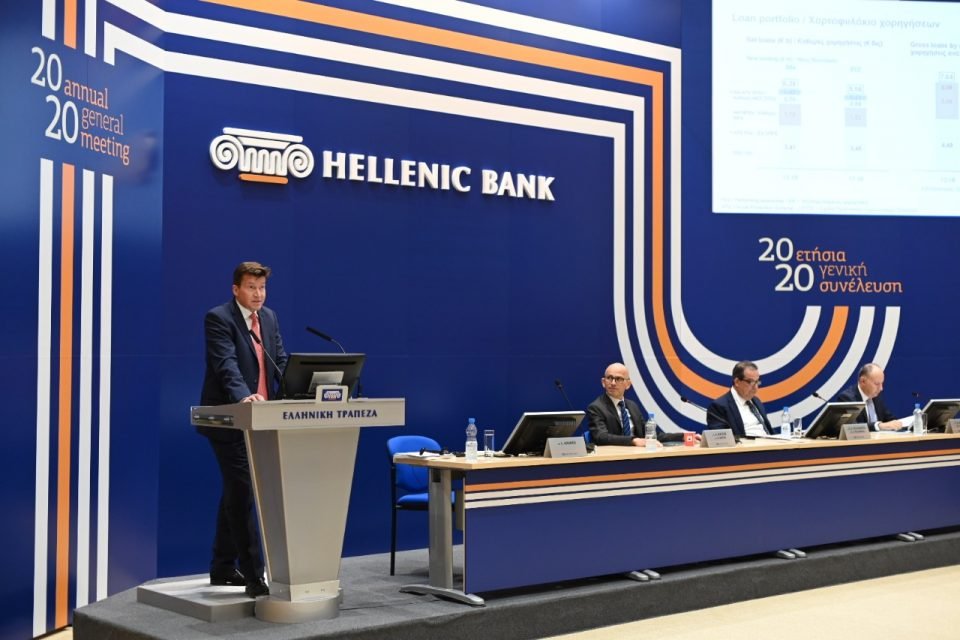 At the 46th Annual General Meeting of Shareholders on Tuesday, Hellenic Bank Chief Executive Officer Ioannis Matsis outlined the bank’s strategy to overcome the effects of the novel coronavirus crisis.

The shareholders meeting took place digitally due to the pandemic.

Addressing the shareholders, Mr. Matsis named the basic weapons that the Hellenic Bank will propose in the face of the crisis. These include strong capital adequacy at 22.5 per cent, strong liquidity as reflected by the Liquidity Coverage Requirement Index at 512 per cent; and reduced risk in the Bank’s balance sheet, since the net Non-Performing assets to assets are at 3.6 per cent.

For Matsis, however, the crisis can not only be managed, but it also presents opportunities. The bank’s next major objectives, Matsis said, are the further reduction of Non-Performing Loans, the ongoing digital transformation of the bank and the expansion of its development of the products it offers to its customers.

In April, Fitch Ratings expressed concerns about asset quality at Hellenic Bank, but noted: “We still believe the Hellenic Bank should remain structurally profitable as long as the coronavirus crisis is short-lived.” At this point, the bank appears to have preserved asset quality, and, as we emerge from the crisis, to have addressed issues like non-performing loans and, with the help of government support for the economy, maintained a loan portfolio with viable businesses and households.

Matsis reiterated the bank’s commitment to support its sustainable customers in both retail and business banking, who are also confronting the challenges of the pandemic. The bank will continue providing them with the necessary liquidity through debt relief and working capital financing.   “As Hellenic Bank, we have strong capital adequacy and liquidity, and we will continue to support our sustainable customers and the restart of the economy,” he said.

Referring to the 2019 results, he pointed out that these highlight the Bank’s strong foundations and strong capital position and stood in particular for the achievement of ten objectives set. He noted spoke of the bank’s profitability, the integration of the work of the former SKT Systems, the successful completion of the  acquisition of the share capital by €150 million, the gradual reduction of the branch network, the maintenance of an expanded customer base with 600,000 customers, the loans of €812 million to individuals and businesses in 2019, the channeling of liquidity for the development and diversification of the euro bond portfolio through a healthy return/performance risk relationship.

Matsis pointed out that the results of 2019 highlight the strong foundations and the strong capital position of the bank. He noted the gradual reduction of the branch network, the maintenance of an expanded customer base, and the loans of €812 million to individuals and companies in that year.

For his part, the Chairman of the Board of Directors of the Hellenic Bank, Dr. Evripidis Polykarpou, described last year as successful for the enlarged Hellenic Bank. Mr. Polykarpou defined as a top priority the acceleration of the technological upgrade of the bank and the further simplification of the procedures for the benefit of the customers, in order to facilitate their transition to the alternative and digital service channels.