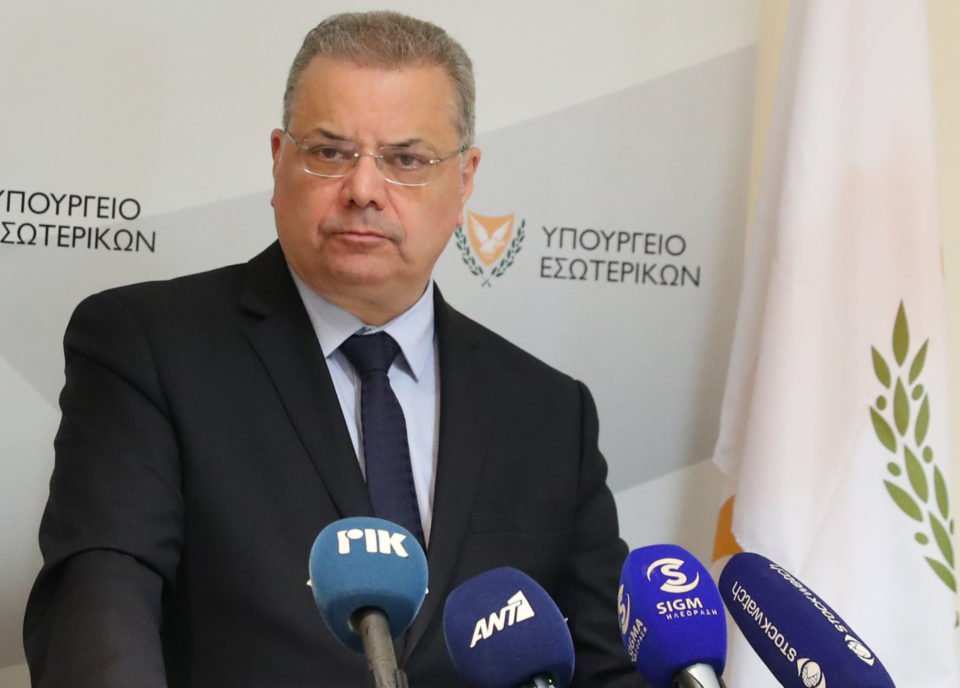 A raft of measures to curb the migration flow, including toughening entry rules for foreign students, clamping down on sham marriages and creating a list of 21 ‘safe countries’ whose nationals will not be considered for asylum, were announced on Thursday.

Interior Minister Nicos Nouris, who announced the government’s sweeping new policies, said the measures include cutting student visas for third-country nationals as many supposed students go on to apply for asylum, stricter controls on municipalities as regards civil weddings to avoid sham marriages, and significantly reducing the time it takes to examine asylum applications and rejection appeals.

People coming from a list of 21 countries considered ‘safe’ will not be considered for asylum, Nouris said.

The minister said that between 2008-2013 the number of asylum seekers was around 13,000 but the migration crisis had seen numbers skyrocket.

Nouris said that after 2014 the numbers reached 34,000, almost Paphos’ population, putting Cyprus on top of the list of EU countries in terms of numbers of asylum seekers.

He reiterated that asylum seekers amount to 3.8 per cent of the country’s population whereas in other frontline countries this percentage is under one per cent.

“It is impossible for Cyprus to receive, host and manage the existing number of migrants,” Nouris said, adding that the country’s resources were not abundant while EU help both financial and otherwise was also not enough.

“Chlorakas’ ghettoisation, the wretched living conditions of people in the old part of Nicosia, the exploitation of foreign workers, are only some of the examples of the inability to manage people effectively,” Nouris said, urging parliament to approve the new measures.

The minister also called on the EU to do more as regards solidarity between member states on the issue of migrants.

He also chastised “misleading” reports on the alleged bad living conditions at the migrant reception centres while failing to mention the measures taken to prevent the spread of coronavirus among residents of these centres.

The new government policy on migration and asylum aims at helping those truly in need and not those arriving as students but who end up as asylum seekers, Nouris said.

Thousands, he said, were taking advantage of the system and gaps in legislation in order to remain in Cyprus even though they are facing no threat in their home countries, the minister said as he announced the government’s new policy.

This policy will involve revising the procedure for admission to colleges, preventing sham marriages and creating a list of what are considered ‘safe countries’, the nationals of which will see their applications for asylum deemed to be groundless.

The policy also involves strengthening the service that processed applications by employing 30 additional officials in order to achieve the goal of examining such applications within 10 days maximum. The government also wants to see a reduction in the time taken for appeals before the plenary session of the Supreme Court, from 42 to 10 days.

Nouris said that a refugee was any person who had left his or her country due to justified fear that he or she would be persecuted there because of race, religion, nationality, or even because he or she belonged to a particular social group.

“We are in solidarity with this refugee, and we are ready to help this refugee,” he said, making a distinction between others who leave their countries to enrol as students but end up being asylum seekers effectively for economic reasons.

“There are thousands coming from safe countries who are under no threat but take advantage of the system and the gaps in legislation to remain in Cyprus,” he said.

He added that one cannot put in the same category families fleeing war torn countries and people suspected of terrorist activities.

Nouris said asylum seekers enter the Republic pretending to be college students or to enter into sham marriages, through the north or by sea.

Asylum seekers from safe countries, he said, “deplete resources from the people who are truly in danger if they return to their countries.”

As regards people who arrive as students but end as asylum seekers, the minister said that between 2017 and 2019, some 3,214 had filed for asylum while another 2,239 entered into marriages with European nationals “which are justifiably deemed as sham marriages.”

He said that as of the next academic year, preconditions for registration to colleges and universities will be the submission of a bank statement on the ability of candidates to pay the first year’s tuition, a statement that they did not travel to Cyprus because their life is in danger, and a certificate stating they have a good knowledge of the English language. Their right to employment will be restricted to vocational training as part of their studies programme, while colleges will not be able to enrol more students than the permitted number approved for them by the education ministry.

Nouris also said the government had prepared three law amendments to prevent sham marriages. “It is estimated that between 2017 and 2019, almost 4,000 sham marriages have been officiated, mostly from specific municipalities,” Nouris said.

The minister said while the state wanted to protect wedding tourism, the bills call for the presentation of a ‘letter of freedom to marry’ from the interior ministry’s registrar. This also concerns cohabitation agreements.

To also tackle the large number of migrants arriving through the north, who comprise 75 per cent of asylum seekers, Nouris said they submitted four amendments including a constitutional amendment to introduce a speedier process for asylum applications.

He said the government has made a list with 21 ‘safe countries’. Applications from nationals from those countries will be deemed manifestly unfounded unless the individual can present evidence that his or her life is in danger if they return to their county.

Last year, he said, around 19,000 asylum applications were pending. Another 2,000 were pending before the International Protection Administrative Court while 11,600 people were granted subsidiary protection.

As of July 1, he said, 30 more officials will be delegated to the unit examining applications suspected to be unfounded so that an assessment is carried out within 10 days maximum.

Nouris also announced that the government would create a new migrant reception centre in Menoyia, where all asylum seekers will be hosted until their applications are examined. The centre is expected to be ready by September.

The minister also said the government had already carried out repatriations with chartered flights to a specific country, while more are expected within the coming weeks.

Nouris called on the EU to do more as regards solidarity between member states on the issue of migrants but also call on Turkey to keep to the 2016 agreement with the EU to retain the refugees for which it is being paid billions.

The minister also took a swipe at the government’s detractors pointing out that some put all these groups into the same category and bash the state.

“They may think they score points against the government presenting Cyprus as an alleged violator of human rights but the only thing they achieve is wronging those refugee immigrants truly in need of solidarity and our care,” he said.

I like to take my tea without sugar – Music Games by A.Mus.Ed